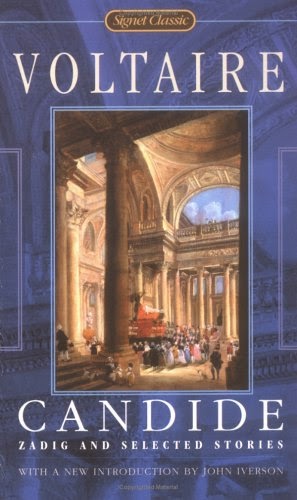 "In the castle of Baron Thunder-ten-tronckh in Westphalia, there once lived a youth endowed by nature with the gentlest of characters."

Published when Voltaire was 66 years old, Candide was expressly written to satirize the philosophy of Optimism.  This optimism was not simply the positive hope of better circumstances, but the belief that everything that happened was for the best, no matter if good or bad, happy or tragic.  This philosophy disgusted Voltaire because he felt that it left no facility for bettering oneself or one's surroundings and that it supported fatalism and complacency.  The tragic earthquake in Lisbon in 1755 seemed to precipitated the writing of this novel, causing the author to question justice in such a calamity, and reflected in his poem, "Poem on the Disaster of Lisbon," written weeks afterward.  Candide was further emphasis of Voltaire's rejection of the attitude that life was the "best of all possible worlds" and that everything that happened in it was for the best.

Voltaire was an established writer and thinker by the time he wrote Candide, yet a controversial figure who by many was both admired and hated.  He  was continuously clashing with the government and the church, suffering two periods of incarceration, and most of his adult life was spent exiled from Paris, the city of his birth.  Much of his works were published under a pseudonym to avoid prosecution.  During a stint in exile, he spent three years in Great Britain and, impressed with the freedoms of England, particularly that of speech, his stay intensified his desire for reforms in his home country.  In 1758 he settled in Ferney in eastern France, spending his time farming, writing and supporting local business.  Candide was written there, not long after his move.

Satire:  the use of humour, irony, exaggeration, or ridicule to expose and criticize people's stupidity or vices, particularly in the context of contemporary politics and other topical issues


Candide is a young man who has grown up living in a state of perfect happiness, guided by his tutor, Pangloss, who is entrenched in the doctrines of Leibnizian Optimism.  Leibnizian Optimism, a philosophy of Gottfried Wilhelm Leibniz, believed that this world is the best of all possible worlds because it was created by an omniscient God who would not create flaws if a better world could have been created, therefore, whatever we experience in this world, be it good or bad, must work towards good.  When Candide is thrown out of his paradise, he travels the world, at times escaping persecution, and at others, searching for his love, Cunégonde, experiencing many horrific trials and suffering that challenge the philosophy entrenched by his tutor, causing him to question over and over, if this really is "the best of all possible worlds." 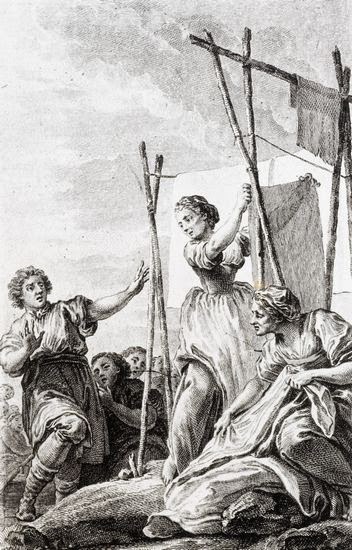 I really whiffle-waffled over how I felt about this book.  On one hand, Voltaire can write a fast-moving, engaging tale.  His storyline was amusing and it did contain deeper themes that, if the reader had a strong attention span, challenged him to think about his view of the world, his place in society and his response to injustice.  Yet Voltaire's method was rushed and honestly, just too absurd to ellict introspection for long.  Candide flew from one adventure to the other, characters threw philosophical comments around, but there was no time or room for philosophy itself.  Voltaire never took a thought or comment from a character into deeper conversation; he simply told the reader what the characters did or thought, but we weren't privy to the conversation.  As a reader, you were often left swimming in a murky haze of Voltaire-imposed ignorance ……. Yet perhaps this was Voltaire's intention.  Perhaps at the end of the book, as Candide states, "we must cultivate our garden," Voltaire meant that we should all mind our own business, not examine things too closely, and just work with what is at hand.  Okay, but it is self-introspection that causes a human being to better himself, it is dialogue and discussion that can often help a society, as well as having the possibility to harm it.  People need to have hope, and to cultivate hope it often means having dreams that reach outside our immediate circle of life.  Within the light-hearted narrative that almost masked the tragedy, I felt a fatalism with which I could not accept or sympathize.

That said, these were only my impressions of a book that touches on topics of which I have a limited understanding.  To give an informed opinion on Voltaire's stance, you would really need to have more than a cursory knowledge of Leibnizian Optimism, as well as having at least summary knowledge of his contemporaries, with a dollop of the study of the Enlightenment on top.  So I will count this as the beginning of my inquiry into the Enlightenment and Voltaire, and hope that my journey fairs better than the journey of Candide.  And until my next foray into Voltaire, I will be cultivating my garden.