The Man Who Was Thursday, A Nightmare by G.K. Chesterton 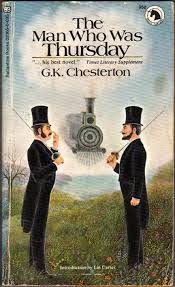 "The suburb of Saffron Park lay on the sunset side of London, as red and ragged as a cloud of sunset."

Why, oh why, does Chesterton confuse me so?  At first this book appeared to start as a mystery.  Two poets meet in Saffron Park, one, Lucian Gregory, a creative anarchist, the other, Gabriel Syme, a conservative poet and undercover police detective.  By his wit and resources, Syme infiltrates the anarchist's group called the Central Anarchist Council, getting himself named one of its seven members, christened "Thursday".  Yet can he stop the assassination attempt the group is planning and expose this dastardly anarchical organization?

The book is much more than a mystery, which readily becomes apparent as the reader makes his way through the entertaining yet confusing prose. There was an initial discussion about anarchy and art, yet I soon realized that the two poets were comparing anarchy and law.  As I read my way through, various questions arose.  Why were the council members named after the days of the week?  Does this point towards some sort of creation story?  Why do all the members who appear evil are not as they seem? What are they really fighting against?  Why is the subtitle "A Nightmare"?  And what was the point of Syme's promise to Gregory? It is mentioned numerous times so it should have some importance.

Yet the big question that hangs over the characters and the reader alike is: Who is the leader of the group, Sunday?  The Professor, named Friday, reveals:

"I confess that I should feel a bit afraid of asking Sunday who he really is."

"Why," asked the Secretary, "for fear of bombs?"

"No," said the Professor, "for fear that he might tell me."


In one review, the reviewer claimed that Sunday represents Nature.  Well, perhaps.  He is both benign and frightening, as this description shows:

"You would not know [his name] ……  That is his greatness.  Caesar and Napoleon put all their genius into being heard of, and they were heard of.  He puts all his genius into not being heard of, and his is not heard of.  But you cannot be for five minutes in the room with him without feeling that Caesar and Napoleon would have been children in his hands."


Sunday's words about himself are even more chilling:

"Since the beginning of the world all men have hunted me like a wolf ---- kings and sages, and poets and law-givers, all the churches, and all the philosophers.  But I have never been caught yet, and the skies will fall in the time I turn to bay.  I have given them a good run for their money ……….  There's one thing I'll tell you though about who I am.  I am the man in the dark room, who made you all policemen."


After its publication in 1908, The Man Who Was Thursday came under a storm of critical approval.  Frighteningly complex, it has been  hailed as "amazingly clever",  "shamelessly beautiful prose", "a remarkable acrobatic performance" and "a scurrying, door-slamming farce that ends like a chapter in the Apocalypse."  One reader declared himself "dazed" at the end of it, which perfectly described my puzzled demeanor as I closed the last page.

As you see, reading the book brought about more questions than answers, so instead I will leave you with a taste of what others have said about this novel:

"…… mystery and allegory take their turn in the scene.  Life, huge, shapeless, cruel and loving, killing and saving, full of antitheses, appearing to each one under a different aspect, measuring each man according to the strength of his soul, turns its strange face upon us.  Life, whose soul is law, nature, whose expression is law, confront the frantic lawlessness of struggling man ---- and behold, those very struggles prove to be based on law again.  And when at the last you sit on the thrones with the Council of Days, you see the mad, miraculous world dance by, moving to a harmony none the less invincible because only half heard."
~  Hildegarde Hawthorne  ~

If you've read The Man Who Was Thursday, what do you think the story was about?