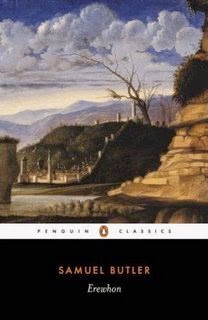 "If the reader will excuse me, I will say nothing of my antecedents, nor of the circumstances which led me to leave my native country; the narrative would be tedious to him and and painful to myself."

I've been reading oodles of satirical fiction lately and entirely inadvertently, as this genre just seems to be dropping onto my lap.  My first taste of utopian satire was given to me by Voltaire's Candide, which left me rather unsure if we were going to be good friends.  Then came Utopia by Thomas More and I was firmly hooked, only to have my enjoyment of it further strengthened with my read of Gulliver's Travels.  My most recent Classics Club spin book landed me with Erewhon by Samuel Butler.  I was somewhat familiar with Butler from my skimming of some of his translation of The Odyssey (wouldn't recommend it for a first read) so I wasn't quite sure what to expect.  Would he be a Voltaire, or a Swift or somewhere happily in between?

The narrator of Erewhon, Higgs, tells the reader of his journey to a fictional country, in fact, modelled on the country of New Zealand where Butler spent the early part of his life.  Higgs loses his native guide, Chowbok, on a trek into the wild, and manages to wander into a society who, while they resemble the human race, have completely different standards for managing their nation.


Butler explicates on some rather curious aspects of Erewhon society.  For a start, the Erewhons view machines as dangerous to their community and anyone caught with one can be at risk of being put to death.  Machines are regarded as having a greater ability than people in that they are growing and evolving at an exponential rate and thus, they have the capacity to enslave mankind.  The Erewhons also view immorality as a sickness and actual illness as a crime.  For example, a man who has lost his wife to illness is tried as a criminal, yet is lauded for his action of raising her insurance premium immediately before her death and, therefore, benefiting from it before he'd paid even two premiums.  There are other curious idiosyncrasies to this society, such as the repellent manner with which they view birth, the rights of animals and vegetables, and their promotion of the idea of unreason, claiming that reason could not exist without it.

Butler claimed that Erewhon nearly wrote itself with some resistance from its author:

"I did not want to write Erewhon.  I wanted to go on painting and found it an abominable nuissance being dragged willy-nilly into writing it.  So with all my books --- the subjects were never of my own choosing; they pressed themselves upon me with more force than I could resist.  If I had not liked the subjects I would have kicked and nothing would have got me to do them at all.  As I did like the subjects and the books came and said they were to be written, I grumbled a little and wrote them."


Apparently it was Butler's aim to make a commentary on the ills of Victorian society, but I had a difficult time finding Butler's voice in the prose.  With Voltaire or Swift, it was easier to see the issues that they were targeting with their criticism, but Butler was more obscure.  He presented issues, but was less clear as to which side of the fence he stood, as some of the most ridiculous laws often had an element of truth to them.  In fact, in a second preface to the book, Butler had to correct some misconceptions with regard to his novel, stating that contrary to the assumption that he was showing Darwin's theory of evolution as absurd, in fact, he had a healthy respect for it, and he goes on, quite charmingly, to blame the Erewhons for all the inconsistencies in the story. For me, the novel soon degraded into great swathes of philosophical narrative with little to prop it up.  I love philosophy, but to engage a reader one needs the background of a story to support it; Butler attempted the reverse in hoping that his philosophy would prop up his story.  This approach only served to weaken the novel as a whole.

In spite of the novel's mediocrity, it is quite obvious that Butler was a great thinker who explored some fascinating ideas that remain with us in the 21st century.  His analogy between crime and disease, the over-emphasis on appearance of an individual, and the especially significant topic of how humans interact with technology and their enslavement to it are all powerful issues that still resonate with us through the centuries.

" .... so ingrained in the human heart is the desire to believe that some people really do know what they say they know, and can thus save them from the trouble of thinking for themselves, that in a short time would-be philosophers and faddists became more powerful than ever, and gradually led their countrymen to accept all those absurd views of life ...... I can see no hope for the Erewhonians till they have got to understand that reason, uncorrected by instinct, is as bad as instinct uncorrected by reason ...." 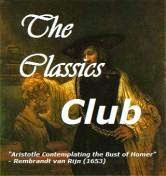