The Canterbury Tales ~ The Friar's Prologue and Tale

While glaring at the Summoner, the Friar counsels The Wife of Bath to leave all questions of authority to the schools and the Church.  He, however, will now tell his tale of the a summoner, the profession being evil and their actions vile. The Host asks him to moderate his comments and encourages temperance, but the Summoner himself gives the Friar leave to tell his tale, promising to pay him in kind and more when his turn comes.  The Host allows the Friar to continue. 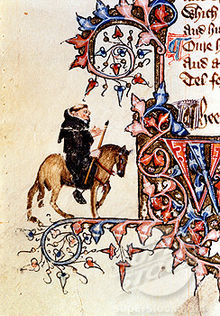 In the country where the Friar lived, there was an Archdeacon who was continually monitoring the community for signs of vices and sin.  To enforce his power, he had a summoner whose job it was to deliver the summons to the church members, outlining their offenses.  Now, this summoner was himself a morass of vice, taking bribes from the parishioners to line his pocket.

One day, in his travels, the summoner meets a yeoman from another country. They both find that they are equally as unscrupulous and corrupt, and pledge an alliance to each other.  The yeomen then reveals that he is, in fact, a demon who has taken the form of a man.  The summoner is not taken aback by this disclosure, and they continue on, finding a man who has his cart and horse stuck in the mud.  Consigning his horses to the devil, it appears the man has sealed their fate, yet the summoner must remind the demon that the man himself has allowed him to take them.  However, surprisingly the demon refuses, claiming that the man did not mean his words, and sure enough, the man is soon praising God when he gets them free.

Next on their journey, they come across a respectable old woman, whom the summoner proceeds to bully, demanding twelve pence or he will accuse her of a number of misdemeanours.  She consigns him to the devil, and when the demon confirms that she is in earnest, he takes the summoner, complete with a frying pan, to the fiery depths of hell, and so ends his reign of terror.

The Friar ends with a benediction:

" ..... The innocent.  Be ready to oppose
The fiend who would enslave you; thus dispose
Your hearts.  He cannot tempt you past your might,
For Christ will be your champion and your knight.
And pray that all these summoners repent
Before the devil takes them off hell bent!"


To sle the innocent, if that he may."
Disposeth ay youre hertes to withstonde
The feend, that yow wolde make thral and bonde.
He may nat tempte yow over youre myght,
For Crist wol be youre champion and knyght.
And prayeth that thise somonours hem repente
Of hir mysdedes, er that the feend hem hente


The Friar does a masterful job of abusing the Summoner with this story.  He portrays the summoner in the story as one who takes bribes, practices extortion and highlights his absolute corruption, yet he also depicts the demon has having more integrity when he refuses to take the man's horses in spite of his words.  The summoner is relegated to a level almost lower than the devil himself, and in this characterization, the grossest insult imaginable is delivered to the "pious" Summoner.

It was somewhat pleasing to see the summoner tangled in his own web of deceit.  One wonders how the Summoner will repay the Friar for this highly imaginative, yet disparaging tale.