The Faerie Queene ~ Book I (Part I) 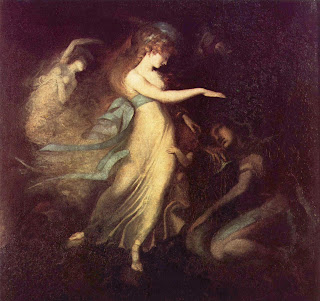 Canto I
The Patron of true Holinesse,
Foule Errour doth defeate:
Hypocrisie him to entrape,
Doth to his home entreate. 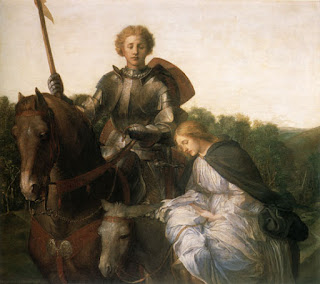 At the behest of the Faerie Queene, the Gentle Knight, or Redcrosse Knight, sets out with his companion, Una, a daughter of a king, who is riding an ass and leading a small lamb.  His quest is to slay a terrible Dragon, that is holding Una's parents captive. Accompanied by a Dwarf as a servant, the travellers come upon a fierce storm and are forced to take shelter in a forest bower for the night.  When morning dawns, they fear that they have lost their way until they come upon a cave.  Una cautions the Knight, fraught with fearful doubts and premonitions of this den, but the Knight will not heed and enters, "full of fire and greedy hardiment".  Inside he discovers a terrible monster, Error, surrounded by her young.  He commences a battle:

"Therewith she spewd out of her filthy maw
A floud of poyson horrible and blacke,
Full of great lumpes of flesh and gobbets raw,
Which stunck so vildly, that is forst him slacke
His grasping hold, and from her turne him backe:
Her vomit full of bookes and papers was,
With loathly frogs and toades, which eyes did lacke,
And creeping sought way in the weedy gras:
Her filthy parbreake all the place defiled has."

At Una's urging, he lops off the head of the monster, whereupon her young engorge themselves with her blood until they burst asunder.  (Are you feeling queasy yet?)  Una and the Knight proceed to look for the right path again, and wander until they come upon an old man, a hermit who takes them to an inn to sleep.  Unbeknownst to our pair, this hermit is the sorcerer, Archimago, and with his magic he conjures up two spirits to beguile our Knight.  One gives the Knight dreams of lust and the other takes the shape of Una offering a kiss when he wakes, yet the Knight resists the temptation.

Canto II
The guilefull great Enchaunter parts
The Redcrosse Knight from Truth:
Into whose stead faire falsehood steps,
And workes him wofull ruth. 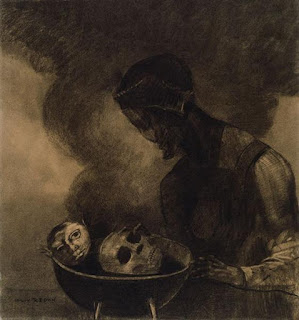 Nonplussed, Archimago puts a sprite in the guise of a young man into bed with Una, and takes the Knight to them upon his waking.  Furious that she has played him so false, the Knight rides off without his lady, and when she discovers his desertion, rides after him, both followed by Archimago disguised as the Redcrosse Knight.

Redcrosse comes across a Saracen Knight travelling with his lady, the daughter of an emperor.  They fight, Redcrosse kills the Knight, Sansfoy, and assumes responsibility for the lady, Fidessa.  Attempting to escape the heat of the sun, they seek the shade of some trees, but when the Knight breaks off a branch, to his horror blood drips from the stem.  A voice informs him that he has injured Fradubio, a knight who had been travelling with his lady, Fraelissa.  Meeting with another knight with his lady, Duessa, he'd fought the knight killing him and took Duessa to his care, not knowing that she was a witch.  Duessa casts a spell, making Fraelissa ugly but one night Fradubio saw Duessa as the monster she was and horrified, he fled but Duessa transformed him into a tree; the spell could only be lifted by him being bathed in "a living well".  Unbeknownst to the Redcrosse Knight, his new companion is actually Duessa in disguise.

Una still wanders, searching for her absent Knight and upon sleeping in the forest, is attacked by a Lion.  However, the Lion is arrested by her beauty and becomes her protector instead.  When they come across a girl carrying water, the girl flees but they follow her to her house and force themselves inside for shelter.  The girl, Abessa, has a blind Catholic mother, Corceca and as the house is asleep, her lover, who is a thief, breaks the door in whereupon the lion kills him, ripping him into tiny pieces.    Una leaves in the morning but the two women set out after her to accuse her of the crime, however they meet Archimago disguised as Redcrosse and inform him of the circumstances.  Archimago finds Una who is overjoyed to discover her "Knight". Suddenly Sansloy, the brother of the slaughtered Sansfoy, approachs and fights with Archimago, nearly killing him until the magician reveals himself. Una, realizing Archimago's perfidy, is caught by Sansloy, the Lion is killed by him and Una is at his mercy.

Canto IV
To sinfull house of Pride, Duessa
guides the faithfull knight,
Where brothers death to reak Sansloy
doth chalenge him to fight. 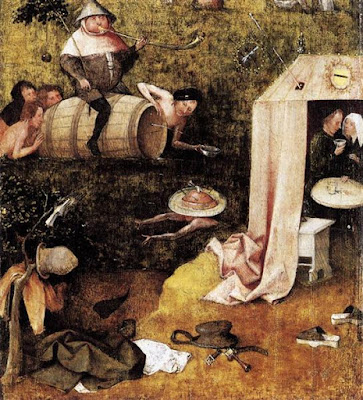 Redcrosse and Duessa/Fidessa come upon a lovely and princely palace, the sinful House of Pride; while it appears stately and magnificent, it is constructed in a weak and ruinous fashion, its foundation unstable.  They enter a large hall were numerous people are gathered and the lady of the palace sits on a throne, her beauty as bright as the sun, but her feet rest on a terrible Dragon.  The Knight and Witch are mistaken for royalty and taken to the front by Vanity, but Redcrosse is uncomfortable with the proceedings.  The lady Queen, Lucifera, daughter of Pluto and Prosperina, decides to take a ride in her chariot.  She is not royalty, but is counselled by six wizards and the chariot is pulled by six beasts which they ride.  The first advisor is Idleness, who rides a donkey and is lazy, lawless, and shaking with a fever; riding on a pig comes Gluttony, eating and drinking like one and is useless for anything; now, Lechery sate upon a bearded goat, disgusting looking but drawing weak women into his spell with his outward talents, yet he suffers the sexual disease of the philanderer; Avarice rides on a camel laden with gold which is his god, however he is ill-dressed, thin from want of food, and sad nonetheless; a ravenous wolf carries Envy with a serpent in his bosom, hate for virtue and joy for pain, he is jealous of his own company and despises Poets no less; Wrath rides on a lion, this counsellor completely lacking self-control and allowing anger to overcome him ---- even while he regrets his ungovernable rage, he cannot overcome it and bloodshed and strife follow in his wake; and Sathan (Satan) sits on the wagon beam whipping them all. While Duessa stays close to Lucifera, Redcrosse stays back not wishing to be part of this unsettling sight, but Sansjoy arrives wanting to battle to revenge his brother.  The Queen tells them to fight on the morrow.  There is feasting that night but later Duessa creeps to Sansfoy's chamber to pledge her loyalty to him.

Canto V
The faithfull knight in equall field
subdewes his faithlesse foe,
Whom false Duessa saues, and for
his cure to hell does go.

Both Redcrosse and Sansfoy prepare for their battle.  Both knights are strong and dangerous, but Sansfoy has his brother's shield and memory to spur him on.  The victor is uncertain until Redcrosse finally is about to slay his enemy, however Sansfoy is covered in a cloud.  Puzzled, Redcrosse searches for his foe but the trumpet sounds his victory and he presents the shield of Sansjoy to the Queene, then goes to have his wounds tended.  A distraught Duessa leaves to find Night and ask why she has allowed her dear nephews (the three Sans-- brothers) to be in peril.  Night is confused with her concern until she recognized her foul "sister" and she agrees to help Sansfoy.  They find the knight and take him to the Underworld, where Aesculapius, the god of medicine is exiled by Jove for bringing Hippolytus back to life.  Because of his sentence, he is hesitant to help them but finally acquiesces.  Redcrosse learns from the Dwarf that there are hundreds of bodies in the dungeons of the castle, many of them powerful rulers, all victims of Pride, and he leaves to escape that fate.  Duessa finds him gone when she returns.

Canto VI
From lawlesse lust by wondrous grace
fayre Una is releast:
Whom saluage nation does adore,
and learnes her wise beheast.

Redcrosse is upset to have left Duessa behind, but he is even more conflicted over Una and her duplicity.  Una, however, is in a vile predicament as Sansloy means to have his lustful way with her.  In distress, she calls out for help and is answered by Fauns and Satyrs, who terrifies Sansloy so that he flees for his life.  They bow down before Una, then dance around her with gladness and joy, crowning her as Queen with an olive garland.  They take her to their leader, Sylvanus, who is amazed at their joy and Una's beauty.  Staying with them for a time, she tried to deflect their worship, but when restrained, they worshiped her ass instead.  A knight, a satyr's son named Satyrane, famed for his courage and his control over the beasts, helps Una to escape her admirers and continue her search for Redcrosse.  They meet a silly travelling pilgrim who informs them of Redcrosse's death, whereupon Una nearly faints, but recovers to hear his story. The pilgrim informs them that the Paynim, Sansloy, is nearby, so Satyrane finds him and challenges him.  The two fight but when Sansloy sees Una he tries to pursue her but is prevented by his foe.  Una flees far from her lustful enemy, but the Pilgrim sees her go and pursues her.  Yikes!  It is not a pilgrim, but the evil Archimago!  What will happen to Una?

"But for to tell her lamentable cace,
And eke this battels end, will need another place."

Oh, my!  This poem is very challenging and moves very slowly.  It's obviously going to take much longer than anticipated, and I'm going to have to split my Book posts into part 1 and part 2, so as not to overwhelm myself and others.  Each of the six books has twelve cantos each, so if I split it 6/6, that should do it!  However, June does not seem to be an attainable finish date, nevertheless I will push ahead and see what transpires.

So far I'm really enjoying the poem.  I'm listening to the Librivox recording by Thomas Copeland while I read and it's very helpful for understanding.  So far, I can see some similarities to Le Morte d'Arthur, but I also hear echoes of Dante.  There is really so much in this poem that can work on so many different levels.  Right now, I'm merely concentrating on understanding what's happening but when I get more accustomed to it, I hope to be able to delve deeper.  And if I have any energy left after summarizing the cantos, perhaps I'll even write about it too! 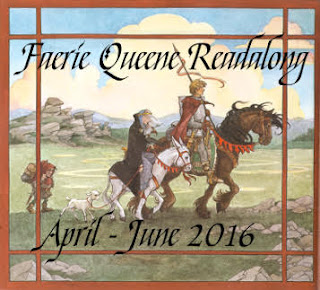