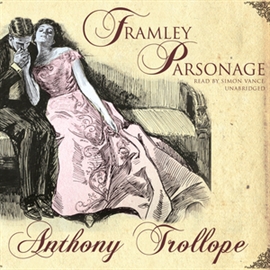 "When young Mark Robarts was leaving college, his father might well declare that all men began to say all good things to him, and to extol his fortune in that he had a son blessed with so excellent a disposition."


In Framley Parsonage, the fourth book in the Chronicles of Barsetshire, Trollope gives us a lively romp through the lives of the inhabitants of East Barsetshire, introducing us not only to their whims and follies, but through their actions, the culture and society of a 19th century English town.


Mark Robarts, a parson of the village of Framley, and a beneficiary of Lady Lufton whose son was his schoolmate, is married to Fanny, a genteel lady of respectable birth.  Yet his patroness is at times difficult to please, and Robarts must navigate the storms of friendship, duty, and financial matters, often muddying the waters that he is trying desperately to clear.  When his father dies and his sister, Lucy, comes to live at the parsonage, an unexpected complication develops that was unforeseen by all and upsets the carefully calibrated balance of societal acceptance.  Robarts encounters further obstacles when he embroils himself with a member of parliament, Nathaniel Sowerby, and his financial dealings.  His trusting, artless, clerical nature is in sharp contrast to the Machiavellian intrigue of men of enterprise, and it appears nothing good will come of the connection.

In Mark Roberts financial dealings with Sowerby, one wonders if Trollope was offering a subtle indictment as to the interactions and associations of church and state.  The innocent perceptions of one is unable to account for the devious machinations of the other and, because of Robarts' influence on those around him, they are affected by the imprudent alliance as well.  Add to that Lady Lufton's displeasure at the Duke of Omnium's vulgar societal group and a possible marriage between a peer and a commoner, and you have class conflict at its finest, a subject of which Trollope is most adept at exploring with a light-heartedness that often belies the deeper implications.

Trollope reintroduces characters from the previous Barsetshire books: The Warden, Barchester Towers and Dr. Thorne.  Miss Dunstable displays her wily financial prowess, Dr. Thorne his ability to be influenced, the Grantley's are in top form with not one, but two suitors in their daughter's wake, and even gentle old Septimus Harding makes a brief appearance.

Two years it took me to complete this novel.  Isn't that ridiculous?  For some reason, the first part of it just dragged, but as soon as I hit the half-way point, I was completely hooked and drawn in to the characters and their stories.  Next in line is A Small House at Allington, which I've heard is excellent.  It won't take me two years to read through this one, I promise! 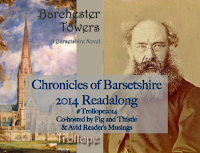