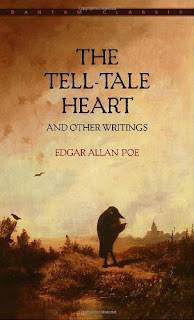 (Warning:  There are spoilers galore in this review, but the story itself is quite obvious, not to mention the title, so I spoiled away!)

A few decades ago, I read this short story as an elementary school student.  From what I can remember from a fuzzy recollection is that the tale creeped me completely out and the image of a beating heart under the floorboards thumped around in my consciousness for weeks after.  However, for some reason I remembered the heart being in a box, which is not in the story.  Why, I wonder?  Was it some illustration I'd seen that had left that impression or simply my mind supplying details?

In any case, The Tell Tale Heart was first published in the literary journal, The Pioneer, in 1843.  It is told in a first person narrative, with the narrator describing a helpless old man whose rheumy blue eye drives him to contemplate the murder of this vulnerable creature.  Although he claims to love the man and have nothing personal against him, the filmy eye is his main focus.  Each night at midnight, he attempts to shine a light on the eye, but each night it does not open and therefore, he claims, he cannot complete his homicidal deed.  Every day, he is kinder to the old man, but on the eighth night, the man calls out before the narrator is able to shine the light, however with patience our murder awaits our terrified victim and when he is able light up the eye, a sense of rage grows within him and he snuffs out the man's life.  Dismembering him, he hides the body parts beneath the floorboards.  Soon after, a knocking is heard and the narrator opens the door to the police who have heard reports of a shriek and have come to investigate.  Elated with his perceived clever deed, the narrator invites them in and they converse right in the room where the murder occurred, the evildoer supposing the police will never discover his crime.  However ....... ka-thump, ka-thump, ka-thump ...... a noise begins ..... a noise that comes from directly under the floorboards.  The tell tale heart .......  The pounding echoes the pounding in the murder's head until he is convinced that the police now know all, and bleats out a wild cry:  "Villains!  Dissemble no more!  I admit the deed! ---- tear up the planks!  ---- here, here! --- it is the beating of his hideous heart!"


Well, well!  And so I reveal the whole story.  Why?  Well, because at first, honestly, it was a huge disappointment.  It's an interesting story, certainly, but a classic?  Bah!  It's simply an implied scary story that is mildly shivery, and then soon forgotten.  What a disappointment! But not trusting my own judgement, I looked around to see what others had made of it.  It seemed like no one could draw any sort of deeper meaning from the tale.  There is talk of the unreliable narrator, who is obviously paranoid and psychotic right from the beginning. There is no explanation of the relationship of the narrator to the old man, or really even why he loves him but hates his eye.  So I let the story sit with me a day or two.  When I returned, I had a vague idea ........... in the beginning the narrator is fixated on the eye of the man; we never are told why but it absorbs all his thoughts until it becomes an obsession.  He murders the old man because he's convinced that he hates it.  Yet in the end, it is the heart of the man that gives the murderer away.  Could it be a commentary on the outside appearance of a person vs. their inner nature, the eye versus the heart?  We see and react to what is seen on the surface, yet is the heart of a person that is their true character, what will eventually "give them away" so to speak.

My conclusion still seems rather elusive and I'm grasping at a possible meaning that is still out of my reach.  Does anyone else have any thoughts on this or any other interpretations that you've discovered?  If so I'd love to hear them!

There is also the theme of the psychosis of the murder, which is rather fascinating.  He continually emphasizes the fact he is NOT crazy, and incessantly accentuates his clever machinations.  And notice in his final words, he calls the police, "villains". Everything is backwards in his twisted mind.

My next Deal Me In Challenge choice will be the essay, Doodles in the Dictionary by Aldous Huxley.

Week 9 - Deal Me In Challenge - Five of Clubs