The Sayings of the Desert Fathers

"This book is an account of the virtuous asceticism and admirable way of life and also of the words of the holy and blessed fathers."

The Desert Fathers were a group of faithful monks and nuns who chose to settle mainly in Lower Egypt, mostly around the desert of Scetes. While some of them lived in groups and had at least some contact with the outside world, some were hermits who preferred to live in seclusion.  Asceticism was also practiced by many to purify their souls.  While Paul of Thebes was the first monk to retire to the desert, Saint Anthony the Great was the one to begin the exodus.  These Desert Fathers served as the early model for Christian monasticism. 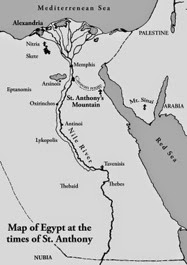 As expected, there are many sayings that deal with religion:

We also find sayings from fathers instructing their disciples:

And fathers who seek harmony:

And lastly, not only sayings from the Desert Fathers, but saying from the "Desert Sisters," as well:

I was expecting to have to slog through this book, but what a delightful surprise.  While these Fathers obviously knew their Scriptures and spent time with God, their focus was on themselves: refining their souls and being a good example to those around them. The personalities of each of them shone through in their sayings and, in spite of many of the sayings being quite short and compact, they brought a window into their lives of asceticism, their values and struggles that was very compelling.  An enlightening read that gives not only a fascinating window into this era of history, but also imparts values that are as relevant today as they were in the 3rd and 4th century.