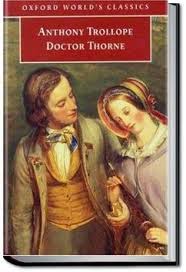 "Before the reader is introduced to the modest country medical practitioner who is to be the chief personage of the following tale, it will be well that he should be made acquainted with some particulars as to the locality in which, and the neighbours among whom, our doctor followed his profession."

Good, dependable Doctor Thorne, our esteemed doctor of Greshambury, lives with his young niece named, Mary.  Yet there is a secret around Mary's birth that few people know; she is the illegitimate daughter of Doctor Thorne's older brother and the sister of Roger Scatcherd, a former poor stonemason and prison inmate, who has amassed a fortune that makes him the rich owner of a large estate.  The ruling family, the Greshams, accept Mary's company and she is friends with some of the daughters, but when it is learned that Frank, the only son, is in love with her, she becomes persona non grata and is ostracized from their company.  A lively plot begins as Frank is determined to marry Mary, Roger Scatcherd is determined to drink himself to death, an inheritance is unclear, and society struggles to maintain its traditional structure. 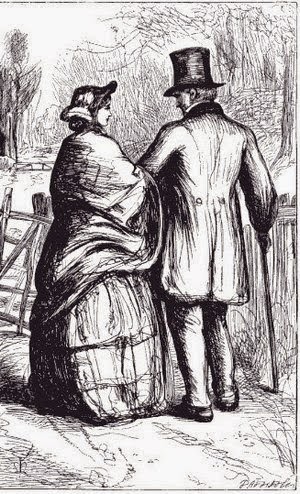 As much as I enjoyed this book, there were a few disappointments, as well. Because this novel was serialized, I found the pacing somewhat inconsistent, which took away a little bit of the enjoyment. After building up slowly with the characters and their situations, Trollope suddenly had nearly a year pass by, a declaration, and then another year was gone, all in the space of a few dozen pages. My second disappointment dealt with the plot itself. One aspect that I enjoy about Jane Austen's writing, for example, is her ability to take a traditional situation and explore possibilities just outside of that tradition. Trollope lulls the reader into expecting the same, yet at the end of the tale, tradition wins out: Scatcherd is shown as an example of what can happen to those who try to rise above their station, Mary becomes an heiress, she marries Frank, and everyone is happy only because convention is followed.  Well, I say, "bah!" to convention!  While I realize departing drastically from societal norms wouldn't be believable, one would think that Trollope could have challenged convention in a plausible way that would have made the story more intriguing. But ultimately money remains the commodity that is worshiped, everyone is happily kept in their social positions, with the same perceptions and the same prejudices, and with nothing unusual or radical to stir them out of their complacency.  Bah!


Perhaps you are wondering why I have barely mentioned Doctor Thorne, who bears the prestigious title of the novel.  Well, curiously, the tale revolves around many characters other than Doctor Thorne.  But while the action circulates around these characters, his importance in this tale is inescapable. He is the respected thread that holds the neighbours together, the good sense in the quandry, the steadying force in the chaos.  He is like the eye of the hurricane, a calm centre while everything else blows in a whirlwind around him.  His tranquil, composed demeanor and sincere warmth and compassion never falter.  In this I can agree with Trollope; he was certainly the hero for me.

The next book up is Framley Parsonage.  So far my favourite is still The Warden but, with three more to go, a new favourite is not out of the question!