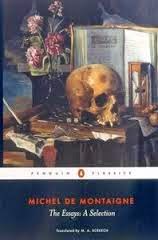 Oh, Montaigne!  What a character!  I'm reading a series of recommended essays, and my plan is to split them into three posts.  So far my introduction to Montaigne has been pleasurable, but taxing to the brain.  His language and progression of ideas, examples and testimonies are not for the faint of heart.  In hindsight, it was wise to take him in measured doses.

On Sadness:  I felt that Montaigne was saying that the deepest sorrows often could not be expressed with outward emotions.  But then he ended by saying that he is little bothered by such violent passions;  I then wonder what gives him the authority to speak on sorrow if he knows nothing of it.  Hmmmm ........

Our Fortune Must Not Be Judged Until After Death:  Well, this was not an uplifting little essay.  Montaigne believes, drawing from the tale of Croseus and Solon in the stories of Herodotus, that a man cannot be judged as fortunate until his death, because various calamities and suffering can plague him until the end.  Your final day tells all.  Nice.  Fortunately he appears to have amended his views on this subject later in life.

To Think As A Philosopher Is To Learn To Die: Yikes!  Another death essay.  Montaigne emphasizes the need to learn to lose the fear of death.  Death is inescapable and it is a piteous error to try to avoid it by any means, as the hour is determined for everyone.  He tosses in Socrates rather wise and pithy remark:  to the man who said "The thirty tyrants have sentence you to death," Socrates replied, "And Nature to them."

Of The Powers of Imagination:  I'm somewhat perplexed as to where to begin with this one.  This essay is supposed to (I believe) explore the relationship of imagination to the mind and body, but Montaigne rather vividly gets into a discussion of the "male member" and "passing wind".  I was laughing so hard I was crying at the end of the "passing wind" section.  I don't think hilarity was intended by the author.  ;-)  Apparently though, people in Montaigne's time wouldn't have blinked an eye at these references, showing that they were much more mature and less sensitive than modern people. And since I was very surprised by his frankness given the era, it also demonstrates that our preconceived ideas can be less than accurate. 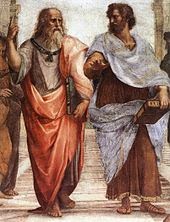 On Educating Children:  I have an interest in education, so this essay was perhaps the most interesting for me, if not the most amusing (see above).  Montaigne felt that an instructor of good moral character and sound understanding was much more valuable than one with founts of knowledge.  He emphasized the value of knowledge for its own sake, and was repelled by the thought that learning should be used to earn profit. The ancient Greeks would understand his dismay; only slaves were schooled to work, not free men.  Montaigne proceeds to say that he does not wish for an educational system that makes children parrot back what they have learned but rather that they are taught to make ideas their own.  He then expands his argument to suggest tossing out the classical education model in place of simply teaching children to philosophize.  He seems to forget that the classical model contains the building blocks that give the student the tools to be able to discuss topics philosophically, not to mention that young minds have to mature to be able to understand the abstract concepts which are required in philosophy.  He supports, as well, exercise and entertainment, but suggests training peculiarities and eccentricities out of people, as they are "a foe to intercourse and companionship of others". Well, okay .......  I do understand Montaigne's main point though.  He is advocating for the teaching of a virtuous character over that of intellectual learning.  In fact, this should be the goal of every teacher, however I believe that there should be a balance between the two, whereas Montaigne seems to want to throw the baby out with the bathwater.

On the Affection of Fathers for Their Children:  In this case, Montaigne means male children but he does share some good advice. A man should not marry too early and responsible thought should be given to the purpose of having children, realizing that they will owe you much more than they can ever pay back.  Instead of forcing the son to be dependent on him when he comes of age, the father should share his wealth and guide him in the use of it, teaching the son to run the estate.  Now Montaigne claims if this is not done, the sons have no other recourse than to become thieves, a habit that will be nearly impossible to break.  I'm not sure I follow his rationale in this case, and cannot agree with it as an excuse, but hey, it's Montaigne, right?  It just doesn't feel normal if he doesn't hit you with some sort of idiosyncratic reasoning.

In spite of some peculiarities, Montaigne has a charm that cannot be denied.  Perhaps Madame de Sévigné characterizes best what his readers experience:  "I have found entertainment in a volume of Montaigne that I did not think I had brought with me.  Ah, the charming man!  What good company he is!  He is an old friend of mine, but by dint of being old, he is new to me. ........ Mon Dieu!  how full this book is of good sense!"