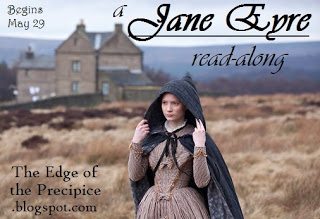 St John makes Jane pay for her unpopular decision to reject his marriage offer with a cold aloofness and a determined effort to display his displeasure.  Jane declares he does not act maliciously, but this reader must disagree with her assessment of his actions.  His sisters are at first pleased that he has offered for Jane, then appalled at his lack of emotion with regard to the attachment, and his efforts to take her to India where they are certain she'll die.  St John attempts once again to change her mind and she is firm, yet after his reading from Revelation one night and his entreaties after, she finds her will bending to his until she hears a voice calling her:  "Jane, Jane, Jane."  She is as certain of it being the voice of Mr. Rochester, as she is certain of her actions the next day and, brushing off St John, retires to her room to await the morning.

St John has left for Cambridge for a fortnight when Jane awakens the next morning but has left her a note almost demanding her reconsideration.  Jane gives it little thought, taking leave of Diana and Mary and setting out in a coach for Thornfield.  She stays at the Rochester Arms, and the next morning walks to the great hall with an impatient anticipation.  However, upon setting eyes on Thornfield she is given a great shock; the house is burned to the ground and with a heavy heart she returns to the inn to ask the cause of the blaze.  It was set one night by a lunatic who was kept in the house.  She escaped from her keeper, Mrs. Poole, who liked to tipple, and Rochester, distraught after the disappearance of the governess he loved and longed to marry, was at Thornfield alone.  He tried to save the lunatic, his wife, but she threw herself from the battlements.  While trying to save the other occupants of the house, the staircase he was on collapsed, and the result was that he is now stone blind.  He lives at Ferndean manor house presently and Jane immediately hires a conveyance to take her there.

Jane arrives at Ferndean just before dark.  Buried deep in a wood, the building is modest and unpretentious.  As she approaches the desolate spot, she spies a figure on the step and knows at once that it is her own Rochester.  His movements are heartbreaking as he struggles to find his blind way to the grass plot in front.  John, the servant, draws near, offering him his arm, which he ungraciously refuses.  After he re-enters the house, Jane knocks and reveals herself to an astonished Mary, then after requesting accommodation, goes into the sitting room to face Rochester.  Carrying in a tray, she offers him a glass of water while an excited Pilot dances around her. Immediately Rochester senses all is not right; he questions her identity while claiming that he is under a delusion.  While he explores her with his hands, he rambles on like a man in a dream.  Is this really his love come back to him again?  When he finally acknowledges that it is she, he questions her rapidly, finding out that she is rich, who she has been with, and that she has had a marriage proposal.  At first he is irritated and self-deprecating, but finally he rises from his funk and asks for her to be his wife, to which she readily agrees.  Eventually, Rochester speaks of a night of longing for her, where he prayed to God and called her name.  Jane discovers it is the same night that she'd heard his voice but doesn't reveal the fact, deciding he has already enough burden and does not need that of the supernatural.

And thus ends this wonderful novel.  The wedding was a quiet one with only the parson and clerk present with the couple.  John and Mary are informed; St John is written to but does not respond until six months later; Diana and Mary approve and wish to visit; Adèle is brought home then sent to school again.  Two years later Rochester partially recovers his sight enough to see his first-born son put into his arms.  Diana and Mary both marry and St John becomes an indefatigable and zealous missionary in India.  The last letter Jane receives indicates that he is dying and she feels compassion for this stern but dedicated man whose passion for Christ is unwavering.

I simply cannot have the same admiration that Jane has for St John's Christian zeal. Regardless of his dedication, the lack of understanding and harsh condemnation he shows towards her for her decision must naturally carry into his dealings with others and the representation of his faith is injurious instead of edifying.

I'm still somewhat puzzled as to why Jane did not want to tell Rochester about her premonition.  Given that they later become inseparable and tell each other everything, why would she withhold this information from him?  The supernatural occurrence brought her to him and it's revelation should be uplifting.  Why such reticence?

I also found the ending to the novel curious.  Why end with an observation on St John? His character was interesting as a contrast, but on its own was rather one-dimensional. Was it an indication that his forceful character still had even a tenuous hold over her?  A commentary to stress the importance of his perseverance for spreading the gospel?  I'm not sure .....

What I am sure of is that this read-along has come to an end, and a thoroughly enjoyable read-along it was!  Thanks to Hamlette for another meander through a classic favourite.  I'm already looking forward to the next one!