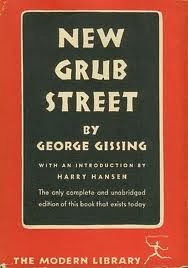 "As the Milvains sat down to breakfast the clock of Wattleborough parish church struck eight; it was two miles away, but the strokes were borne very distinctly on the west wind this autumn morning."


I wanted to like New Grub Street more than I actually did.  Gissing obviously wanted to show the struggle which writers faced where they were required to produce a product that would "sell" rather than write something they considered art.

Jasper Milvain is presented as a middle-class man who is rather lazy but has a talent for finding his place in the literary business because of his aptitude for targeting publishers with a product that the public wants.  He has no real standards and no true feeling and his only aim is to know the right people, make an advantageous marriage and grow richer.

Edwin Reardon is a writer who has had mild success with a novel and is attempting to write another, however his marriage to Amy Yule, a woman slightly higher in social status, puts pressure on him to perform and he suffers from writer's block.  We experience his slow spiral into poverty, culminating in his death.

Other characters populate the novel, such as Marian Yule, who falls in love with Jasper, only to learn through his disloyalty, that he is a money-grasping swine.  Jasper's two sisters play important roles and the lesser characters of Alfred Yule, Marian's father, and the writers Whelpdale and Biffen (who sticks to writing for art) add depth to the story.

On one hand, the story was excellent but I had issues with Gissing's handling of the characters.  Often I found they acted in ways particularly to get a point of Gissing's across and not because they would naturally act in that manner.  This took away from the plot and diminished the issues the story was meant to bring to light.  In fact it bothered me so much, I really lost focus during a few points in the novel.  Overall it was a good read but I felt that the characters struggled to maintain integrity and plausibility.  I would give it 3.5 stars.