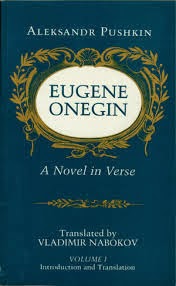 "My uncle - high ideals inspire him;
but when past joking he fell sick,,
he really forced one to admire him -
and never played a shrewder trick."

Eugene Onegin is a fun-loving, rakish young man who lives carelessly among fashionable society and cares nothing for any of the responsibilities of life.  Yet soon his wild living becomes stale and, desperately bored, he moves to an estate in the country inherited from his uncle, to recapture the zest in life.  Onegin's lack of growth and a stable character causes him to return to his constant feelings of ennui and he passes his days in careless endeavours.  Enter, Tatyana, a sheltered girl who falls passionately in love with Onegin.  Finally, amid her torments of love, she composes a letter to Onegin, confessing her devotion.  Giving her a surprisingly gentlemanly refusal, he then, on a whim, proceeds to seduce his friend, Vladimir Lensky's, future wife, Olga, who is the sister of Tatyana.  Lensky, in a fit of poetic rage, challenges Onegin to a duel, where Lensky is shot through the heart.  A number of years later, Onegin spies a married Tatyana at a party and is immediately drawn to her.  He pursues her to the point of exhaustion and finally writes her a letter acknowledging his love and eternal devotion.  Tatyana, in spite of still harbouring tender feelings for Onegin, spurns him from the outset, and eventually declares that she would never be unfaithful to her husband.  Because Onegin has never made any effort to develop into anything other than an empty man, he is left with a bleak future ahead of him.

I've hear it mentioned that Tatyana is the true hero of this novel, and her strength and effect is certainly evident.  While she shows a naivety and a juvenile infatuation with Eugene when she first meets him, years later when they meet again, she exhibits the poise and maturity of a sophisticated and experienced young woman.  In the magnificent finale, she admits her love for him but says, "… but I've become another's wife -- and I'll be true to him for life."   Onegin has spent his whole life blowing around like a leaf in the wind, consumed by ennui, driven by precipitate decisions and self-absorption, while Tatyana grows and blossoms into a strong woman with firm convictions.  She became a truly admirable character. 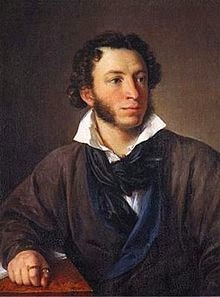 One wonders at the commonalities between this work and Pushkin's life story.  Pushkin, himself, was no stranger to duelling.  He was involved in many contests before being killed in a duel while defending his wife's honour, echoing his poet Lensky's fate in an ironic prophesy. And, of course, there was the question of Pushkin's wife being unfaithful, as Olga was untrue to Lensky, which one can also contrast with Tatyana remaining true to her vows of marriage at the end of the tale.

In one way, the poem is an eerie premonition of future events, while on the surface it takes many forms; playful, romantic, humorous, mocking, tragic.  It's a tribute to Pushkin's genius that he was able to artfully blend a myriad of themes and emotions into a introspective classic that examines the human condition and began a Russian literary tradition.