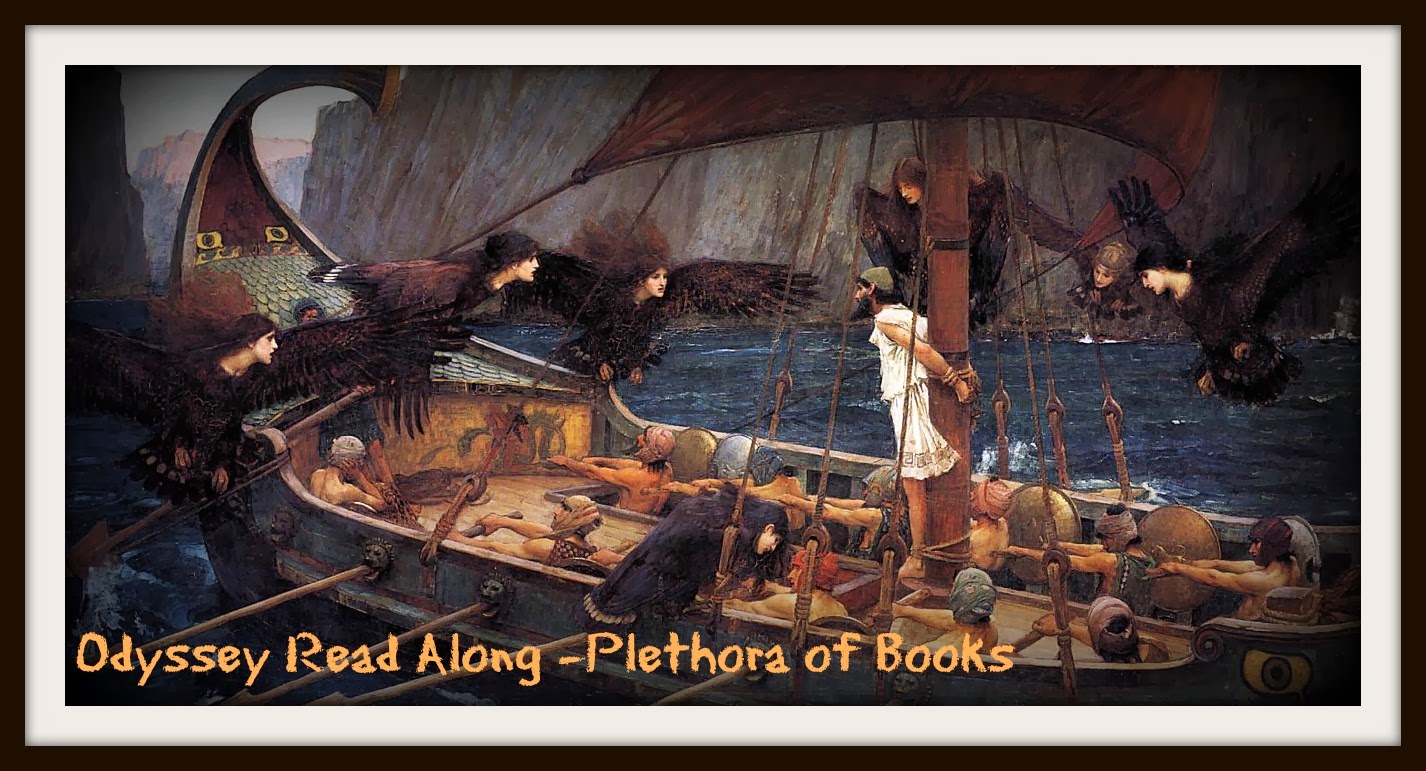 The Odyssey Read-Along @ Plethora of Books

Telemachos and Athene arrive at Pylos, the home of Nestor.  After Telemachos asks Nestor for news of his father, Nestor describes their homecoming; how a quarrel between Agamemnon and Menelaos sprang up and how half of the forces left with Menelaos, including Nestor and Odysseus.  However, another quarrel began and Odysseus turned back, while Nestor continued on the windswept ocean and, with many prayers and sacrifices, made it home safely without knowing what happened to the other Achaians.  As Athene showed favour towards Odysseus in Troy, so Nestor hopes she will show favour towards his son by helping him rid his house of the unwanted suitors.  When Telemachos states that even the gods couldn't help him with that problem, he is scolded by Athene whereupon he reveals that he believes his father dead.  Nestor then relates the stories he has learned later of the homecoming of the Achaians who had been with him: Agamemnon was killed by Aigisthos, the lover of his wife, Klytaimestra, upon reaching home, yet 8 years later Aigisthos was killed by Orestes, the son of Agamemnon; Menelaos was blown to Egypt by the gods and there lived many years before recently returning to his kingdom.  Nestor counsels Telemachos to find Menelaos who will speak the truth to him. Offering horses and his sons as guides on the morrow, he gives Telemachos a bed in the palace in which to sleep.  When dawn arrives, another sacrifice is made to the gods and Telemachos departs by chariot for Lakedaimon, the home of Menelaos.

A King and His Kingdom

While the Kings of Greece appear to be well-respected by their people, in Ithaka there is a lack of loyalty and devotion.  Respect comes with a price, and if a king is no longer able to benefit his subjects, they often will look somewhere else for either leadership, or conversely, seek power themselves.

During the short time Telemachos and Athene spend on Pylos, Nestor has two sacrificial feasts to the gods.  The detailed explanation of these offerings shows Nestor's piety and generosity.  His devoted worship of the gods is perhaps one of the reasons he was able to return home from Troy with very few delays, unlike the rest of the Achaians.

Telemachos and Athene arrive at the house of Menelaos in Lakedaimon. The couple show hospitality to their guests, bringing them into the palace to feast.  Menelaos tells of their 8 year delay in Egypt before returning home and laments the death of his brother, Agamemnon, at the hands of his wife's lover.  When he begins to reminisce about the Trojan War, he brings everyone to tears.  Helen relates how Odysseus came to her from out of the Trojan horse, extracting a promise of silence about their presence, yet Menelaos contradicts her, accusing her of trying to lure the Achaians out of the horse and to their deaths.  The next morning Telemachos shares his troubles with Menelaos, whereupon Menelaos tells him the story of the Old Man of the Sea, Proteus, who revealed the death of two of the Achaians, Aias and Agamemnon, but acknowledged that Odysseus was alive, though a captive of Kalypso (which means "I cover" or "I conceal" in ancient Greek) on her island.  Meanwhile, on Ithaka, the suitors discover that Telemachos has sailed and are stupefied at his daring.  Antinoös recovers and plots to take a ship to set an ambush upon Telemachos' return, to take his life.  Penelope learns of the journey of Telemachos and of the suitors plans, and while initially distraught, she has a dream that all will be well because Athene is with him.  When she asks if Odysseus still lives, she is told: "I will not tell you the whole story whether he still lives and looks upon the sun's shining, or whether he has died and is in the house of Hades."

Menelaos states that he would gladly be happy with one-third of the riches he returned with, if only it would bring back the fallen heroes of the war. Spoils and riches are equated with glory in this culture and it is interesting that he would not give up everything for his fallen comrades.  Fame and glory can often be more important than life itself.

The interaction between Menelaos and Helen seems at once, comfortable and strained.  Each tell a conflicting story about Helen's actions during the end of the war, and it is apparent that her husband does not believe her rendition.  After 10 years, they have learned to live together but trust is certainly lacking.  Is Helen telling the truth?   After such a long time, Helen's character is still elusive.

A King and His Kingdom

Penelope, half pleading with, half scolding the suitors says:

"…….. Nor have you listened to what you heard from your fathers before you, when you were children, what kind of man Odysseus was among your own parents, how he did not act and spoke no word in his own country that was unfair ….."


Odysseus has been gone so long that the suitors have never known him personally, and this is partly from where their disrespectful attitudes stem. Their king is like a myth or dream, and there is nothing to tie their allegiance to him, except stories passed down from their elders.

Menelaos, when recounting his adventures in Egypt, reveals that the reason for his long detour was that he had neglected to render complete hecatombs (offerings) to the gods, angering them.  This is in contrast to Nestor, who made the proper sacrifices and arrives home quickly and safely.

The Odyssey Read-Along Books I & II