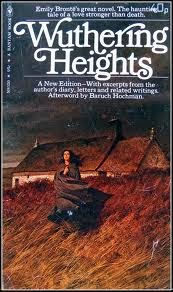 "1801 - I have just returned from a visit to my landlord - the solitary neighbour that I shall be troubled with."

I didn't expect to love this book.  I had been avoiding it for years with just a vague feeling that it wouldn't live up to expectations.  Then Maggie came along with her January Read-Along and I knew it was the impetus I needed to read it.  Honestly, I am glad I did read it but it turned out pretty much as I expected.  It's certainly not a terrible book, far from it …… it has high drama, passion, tension, shock and best of all, it is very well-written.  Yet on the other hand, it is romanticized and highly sentimental with dialogue such as:

"Oh!" he sobbed, "I cannot bear it!  Catherine, Catherine, I'm a traitor, too and I dare not tell you!  But leave me and I shall be killed!  Dear Catherine, my life is in your hands; and you have said you loved me --- and if you did, it wouldn't harm you.  You'll not go, then?  kind, sweet, good Catherine!  And perhaps you will consent ---- and he'll let me die with you!"

The plot is highly suspect with coincidence after coincidence, happenings such as Nelly giving in to Catherine or Heathcliff's whims, time after time, when there is really no reason to, and in spite of the fact she is often worried about losing her position if she does.  Yet I think its worst defect is the insufficient human depth in many of the characters, as they often acted as if they were automatons with emotional buttons that get pushed whenever the authoress needed that particular emotion to drive the plot along.  Catherine swings wildly from willfulness to thoughtfulness, from vicious teasing, to caring empathy, traits that do not meld together to form a believable character.  Many of the characters suffer the same fate.

Emily Brontë was one of the three Brontë sisters who wrote under the pseudonyms Currer, Ellis and Acton Bell.  Wuthering Heights was her only novel, published a year before her death of tuberculosis at the age of thirty.  She would never learn of its success.


While Wuthering Heights is certainly compelling and captures the reader's attention, it does so by using devices such as twisted emotion, shocking circumstances and profoundly dramatized situations, techniques not worthy of a well-composed classic.  The writing is excellent yet the content reflects an immaturity in construction, perhaps the innocence of a sheltered young girl relating what is imagined about life without actually having the experience of living it.  Relatively juvenile plot devices were employed with perhaps a charming innocence.  Heated emotions do not necessarily mean an increase in love; and claims of sentiment which lack corresponding action are meaningless.  Is it an exciting read?  Absolutely!  Do you want to know what happens next?  Of course.  But to compare this novel to Jane Eyre is like comparing a diamond to crudely cut glass.  They are not in the same sphere.


Now before I am too hard on poor Emily, I think her sister had brilliant insight into her sibling and the novel's birth.

"I am bound to avow that she had scarcely more practical knowledge of the peasantry amongst whom she lived, than a nun has of the country people who sometimes pass her convent gates.  My sister's disposition  was not naturally gregarious; circumstances favoured and fostered her tendency to seclusion; except to go to church or take a walk on the hills, she rarely crossed the threshold of home.  Though her feeling for the people round was benevolent, intercourse with them she never sought; nor, with very few exceptions, ever experienced.  And yet she knew them; knew their ways, their language, their family histories; she could hear of them with interest and talk of them with detail, minute, graphic, and accurate; but with them she barely exchanged a word.  Hence it ensued that what her mind had gathered of the real concerning them, was too exclusively confined to those tragic and terrible traits of which, in listening to the secret annals of every rude vicinage, the memory is sometimes compelled to receive the impress.  Her imagination, which was a spirit more sombre than sunny, more powerful than sportive, found in such traits material whence it wrought creations like Heathcliff, like Earnshaw, like Catherine.  Having formed these beings, she did not know what she had done.  If the auditor of her work, when read in manuscript, shuddered under the grinding influence of natures so relentless and implacable, of spirits so lost and fallen; if it was complained that the mere hearing of certain vivid and fearful scenes banished sheep by night, and disturbed mental peace by day, Ellis Bell (Emily Brontë) would wonder what was meant, and suspect the complainant of affectation.  Had she but lived, her mind would of itself have grown like a strong tree; loftier, straighter, wider-spreading, and its matured fruit would have attained a mellower ripeness and sunnier bloom; but on that mind time and experience along could work: to the influence of other intellects, it was not amenable."


Charlotte Brontë says it so well.  Wuthering Heights is a well-written novel, but the components are but mere twigs and undeveloped buds, showing promise of growth, but not yet ready to burst into the splendour of full form.  And sadly, they never would.