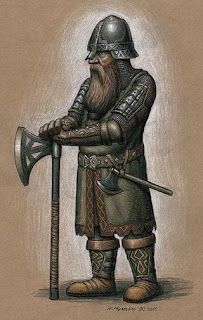 With plucking pizzicato and the prattle of the kettledrum
We’re trotting into battle mid a clatter of accoutrement;
Our beards are big as periwigs and trickle with opopanax,
And trinketry and treasure twinkle out on every part of us –
(Scrape! Tap! The fiddle and the kettledrum).

The chuckle-headed humans think we’re only petty puppetry
And all our battle-tackle nothing more than pretty bric-a–brac;
But a little shrub has prickles, and they’ll soon be in a pickle if
A scud of dwarfish archery has crippled all their cavalry –
(Whizz! Twang! The quarrel and the javelin).

And when the tussle thickens we can writhe and wriggle under it;
Then dagger-point’ll tickle ‘em, and grab and grip’ll grapple ‘em,
And trap and trick’ll trouble ‘em and tackle ‘em and topple ‘em
Till they’re huddled, all be-diddled, in the middle of our caperings –
(Dodge! Jump! The wriggle and the summersault).

When we’ve scattered ‘em and peppered ‘em with pebbles from our catapults
We’ll turn again in triumph and by crannies and by crevices
Go back to where the capitol and cradle of our people is,
Our forges and our furnaces, the caverns of the earth –
(Gold! Fire! The anvil and the smithying).

There is not much information on this poem to quench our curiosity as to how it ties to Narnia.  Tirian in The Last Battle sings a short "Narnian marching song", very much like it:

The Last Battle was finished in the spring of 1953 but not published until 1956 and Narnian Suite was written in 1953.  Perhaps Lewis simply attempted to take the original marching song and expand it.  In any case, it's all speculation at this point; I may come up with some reference to it as I read through Lewis' letters (yes, three huge volumes with a fourth soon to be published).