Emil and the Detectives by Erich Kästner 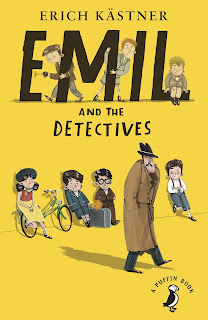 As part of the Children's Classic Literature Event hosted by Amanda at Simpler Pastimes, the read-along for this year is Emil and The Detectives. I've been wanting to read this German translated children's book for years, so I was very glad when it was chosen.

Emil lives with his widowed mother in the small town of Neustadt.  As the story opens, he is bound for Berlin to visit his uncle, aunt and grandmother who live on 15 Schumannstraße. His mother works very hard as a hairdresser and has saved 140 marks, which she entrusts to Emil to give to his grandmother.  Emil is a good boy and determined to carry out his mother's request, but little boys can get tired on long train rides and Emil falls asleep.  When he awakens, the money he'd pinned inside his pocket is gone!  At first distraught, Emil spies the thief and takes off after him.  Thus ensues a riotous romp through the city of Berlin with Emil, the thief, and numerous boy detectives, all of whom are determined to help Emil with his plight.  Will Emil recover his stolen cash, or learn a valuable lesson instead?

In spite of the Emil's adventurous exploits and suspenseful situations, he also shows a deep understanding of human nature:

"Emil had known for a long time that there are always people who say, "Ah, well, things used to be much better."  So he paid no attention when anyone announced that formerly the air was much more healthful or that the oxen had bigger heads.  Because usually what they said wasn't true, and they belonged to the sort who refuse to be satisfied with things as they are for fear of becoming contented."


Emil also notices the differences in a large city with regard to the lack of closeness of community:


"The city was so big and Emil was so mall.  And no one cared to know why he had no money and why he didn't know where he had to get off.  Four million people lived in Berlin, and not one of them was interested in Emil Tischbein.  No one wants to know about other people's troubles.  And when anyone says, "I'm really sorry about that," he usually doesn't mean anything more than, "Oh, leave me alone!"

Here are a few of the places Emil visited in pursuit of the thief and justice:


This book was absolutely delightful.  Being translated from the original German, it had a somewhat different tone, but the action and the repartee from the characters leaves the reader both in suspense and laughing.  There are wonderful contrasts of the old and the new, the traditional and the modern, the young and the old, and the importance of loyalty, duty, perseverance and family.  It is a clever and adventurous tale, both endearing and diverting.

The author himself appears in the story, as an unidentified man who assists Emil with money, then he later returns to take part in the mystery.  Erich Kästner was a poet, author, screenwriter and satirist, and when he wrote Emil and the Detectives in 1928, the book sold two million copies in Germany and was translated into 59 different languages.  With the advent of the Second World War, Kästner opposed the Nazi regime but chose not to go into exile.  He was interrogated many times, and personally watched Goebels book-burning of May 10, 1933, his books being part of the kindling.  His home was destroyed in a bombing raid in 1944, and finally in 1945 he obtained permission to travel to the Tyrol for a fictitious moving filming, instead managing to avoid the Soviet assault on Berlin.  He was still in Tyrol at the close of the war; when he returned to Germany he moved to Munich where he lived until his death. 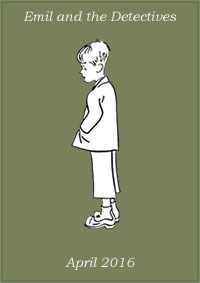 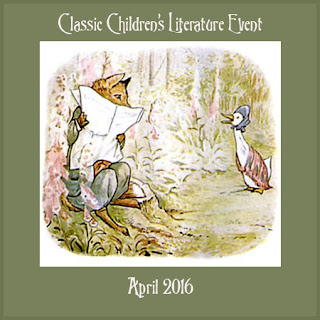