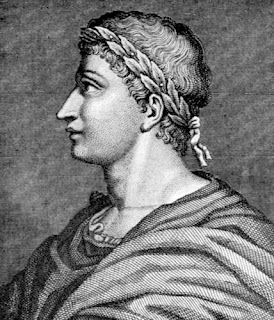 “My soul would sing of metamorphoses.
but since, o gods, you were the source of these
bodies becoming other bodies, breathe
your breath into my book of changes: may
the song I sing be seamless as its way
weaves from the world’s beginning to our day.”


Publius Ovidius Naso was born in Sulmo, east of Rome in the year 43 B.C.  As a son of an upper middle class family, his father sent him to be educated in Rome to distinguish himself in a career in law or government.  Ovid was known as an exemplary rhetorician and worked at minor magisterial posts before quitting his public career to pursue poetry. Immediate success followed his first published elegy and by 8 A.D., the year in which Metamorphoses was published, he was one of the foremost poets of Rome.

Suddenly, in the same year, the emperor Augustus Caesar banished Ovid from Rome, and the poet went into exile in Tomis on the Black Sea.  The only clues we have to his exile is from Ovid himself where he refers to his carmen, or songs, and his error, or indiscretion.  Speculations abounds as to these two causes.  His poem Ars Amatoria, or The Art of Love, was a poetic manual on seduction and intrigue, which Augustus may have viewed as corrosive to the moral structure of Roman society, and may very well be the carmen of his sentence.  Rome, at that time, was experiencing a period of instability and Augustus was attempting to re-establish traditional religious ceremonies and reverence of the gods, encouraging people to marry, have children, and making adultery illegal.  Ovid's earlier poetry espoused extra-marital affairs and Metamorphoses is ripe with a very pronounced, and oftimes strange, sexual element in the myths recounted. The treatment of the gods is not reverential and perhaps it wasn't surprising that Augustus wished to rid himself of the popular poet.  Lamenting his exile in his poem Tristia and Epistulae ex Ponto (letters to friends asking for help with his return),  Ovid died in Tomis in 17 A.D.

Along with O at Behold the Stars, Cirtnece at Mockingbirds, Looking Glasses and Prejudices ... and Jean of Howling Frog Books, I began to read Metamorphoses in January and what a read it has been!  Here are links to my posts for all of the fifteen books of Metamorphoses:

In Metamorphoses (Metamorphōseōn librī), or Book of Transformations, Ovid relates over 200 transformations.  Composed in the epic meter of dactylic hexameter, as a whole, Ovid's tales don't appear to follow an obvious chronological order:  stories break off and are continued in other books; some stories wrap back around on themselves, there is a curious lack of important detail in some (which we know from other sources); and often there are stories nested within stories told in a media res format.  Even how Ovid relates his stories speak of flux and change.

The tales themselves offer a smattering of myths from Greek and Roman legend, including Cadmus, Perseus, Jason, Theseus, Hercules, the heroes of Troy and Julius Caesar, although the narratives can also include mortals and lesser deities.  Murder, rage, hubris, affairs, rape, and judgement of the gods abound in his tales, leaving the reader shocked, disgusted, enamoured, sad, engrossed, irritated, and often, conflicted; Ovid can provoke a myriad of emotions within the same story, evidence of the efficacy of his writing.


While Metamorphoses is our primary source for some myths, such as Apollo and Daphne, Phaeton, and Narcissus, the playful and ironic tone of the work suggests that we can't always take Ovid seriously in his delivery, and the myths themselves could have been subject to his alterations.  In addition, the work was set out in fifteen books, rather than the usual twenty-four of the common epic standard, and certain important names and actions are missing from very important narratives, such as Dido, queen of Carthage, Jason and Medea, the Trojan War, etc.  I can't help but feel that Ovid was writing with an agenda.  Was he perhaps attempting to "metamorphoses" the traditional epic poem, the traditional myths and the traditional religious tenor of Rome as well?


Yet in spite of the speculation, the graphic description, the sexual inferences, the gratuitous narrative and even the confusion, Metamorphoses is unparalleled as a literary adventure.  Ovid's work is certainly one that has a life of its own and its owner a share of its fame.  However, as the poem ends, Ovid reveals that fame and glory were his original intent.

" ..... But with the better part of me, I'll gain
a place that's higher than the stars: my name,
indelible, eternal, will remain.
And everywhere that Roman power has sway,
in all domains the Latins gain, my lines
will be on people's lips; and through all time ---
if poets' prophecies are ever right ---
my name and fame are sure: I shall have life."

While Ovid's works went out of fashion for a time, in the late 11th century classic literature gained a new life.  Ovid's writings began to have a significant influence on culture, the 12th century often being called The Ovidian Age.  As cathedral schools flourished in the early Middle Ages, Ovid's work was widely read as moral allegories, with added Christian meaning.  William Caxton published the first English translation of Metamorphoses in 1480, and the poet's influence continued, imbuing Shakespeare with many of his comparisons.  In fact, the many Ovidian allusions within Shakespeare's works are part of what makes it difficult reading for modern day readers, unless they are familiar with this work.  Ovid certainly has approached a fame and regard worthy of a great poet, and perhaps has vindicated himself within the realms of classic literature.