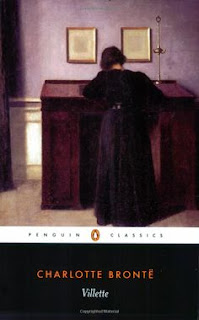 "My godmother lived in a handsome house in the clean and ancient town of Bretton."

What on earth have I just read?  This book simply cannot be written by the same author who wrote Jane Eyre!  The mind rebels!  The heart rebels!  It cannot be!  Am I sounding very dramatic and flourishing and vocal?  That's because I've spent 572 pages being lulled catatonic.  What happened .....??

Brönte begins with introducing the reader to Lucy Snowe, an unassuming educated young woman, who is left alone after the death of her family, with only her godmother, Mrs. Bretton as a familiar contact.  In the house of her godmother, she knows her son, Graham Bretton, and on one visit meets a lodger, a little girl named Polly who is quick-witted, yet bordering on rude and displays an unusual attachment to the Bretton son.

As Lucy returns home, this story is left hanging and we follow Lucy to a job as a companion and then, at the death of her employer, Lucy decides to set out for the country of Labassecour (thought to be modelled on Belgium, where Brönte herself taught at a girl's school) to search for work.  Miraculously, she is immediately taken on as a teacher at a respectable school in the town of Villette.  Through Lucy's eyes only, we meet the headmistresses, Madame Beck; teachers at the school, in particular the fiery M. Paul Emmanuel; Polly's cousin, Ginevra; and finally an astounding secret about the local doctor, Dr. John, is discovered.  Coincidence piles up on coincidence, until one no longer puzzles but simply must move on.  Two important relationships occur in Lucy's life, yet nothing seems to truly touch her as she remains the passive and faithful narrator, except when it comes to the collision of Catholicism and Protestantism, one of which she attacks with a vitriolic vehemence and the other which she lauds as the only way to heaven.

The writing meanders all over the place and the characters appear chiselled with a hacksaw.  Polly who is mean-spirited and selfish as a child, suddenly appears, not only in a completely different city but in a different country and, as a young woman, is now pleasing and thoughtful and wise.  And she has developed this warm and winning character in spite of having a father who is rather petty, obtuse and slightly vindictive. Her great love for him appears to be the only explanation as to her transformation. Characters are often described by Lucy as having certain traits and then later are bestowed with either oppositie traits, or the original ones are highly magnified in melodramatic fashion to serve authorial purposes.  The process is problematic, to say the least.

Lucy herself is our greatest conundrum. She is like a wraithful spirit who hovers over the drama in the story and participates in narration and judgement but barely with action.  Like the Greek goddess Astraea, she pronounces moral, religious and ethical judgement on each character, yet in her zeal, often appears to forget that she is on the same level as those around her.  Nevertheless, she is a complex character and while her sentences can often be harsh, we also at times sense a softening of her manner and a deeper generosity in her character.

Brönte does display some fine writing in parts of the novel and there is a peculiar weaving of a wild, melodramatic narrative into a character who is quiet, aloof, reserved, and very nearly lifeless.  Brönte also employs contrasting themes but I would have enjoyed them more if I felt that they came from superior writing aptitude instead of displayed prejudices.  I also was irritated with her penchant to play with the reader.  She seemed to be saying, "oh, so you'd like to see this scenario play out?  Well, too bad, I'm deliberately going to give you this."  Quite frankly, I finished feeling rather offended, as if someone had just been rude or discourteous.  An excuse for her approach may be found in the successive deaths of three members of her family within eight short months, five years before Villette was published, and there is some suggestion that Brönte was struggling with depression. With this fact in mind, I honestly tried to stick with this novel and find some sort of redeeming feature, but the inconsistencies and coincidences were simply too insurmountable, and the meek yet God-like character of Lucy too unpalatable.  Certain reviews claim that this book is a psychological masterpiece, and as I said, Brönte certainly seems to play with psychological aspects of both the characters and the readers' perceptions of them.  Yet this experiment is conducted in an unnatural way, one that is ripe with preposterous manipulations and improbable fluctuations in both personalities and circumstances.  I was psychologically exhausted after finishing the novel, not for its fine crafting, but in an effort to grasp its implausibilities.  If that brand of psychology is admirable, I would rather treasure the simplicities of Jane Eyre.


I must say the only benefit gained from reading Villette is perhaps the personal insight it gives into Wuthering Heights.  The raw, wild, startling prose of the latter, while not necessarily obvious in the former, exists in echoes, while the ghostly apparition and the darkness in the souls of men stand out in stark relief.  Villette was an unsettling novel certainly, but more importantly it was unsatisfying, and I was left with a sense of emptiness and time wasted.  Fortunately there are rumours of read-along of Jane Eyre coming up at the end of May, hosted by Hamlette at The Edge of the Precipice.  Thank heavens!  I will be able to cleanse my palate with one of my all-time favourite novels and hopefully regain some of the deep respect I had for its author.