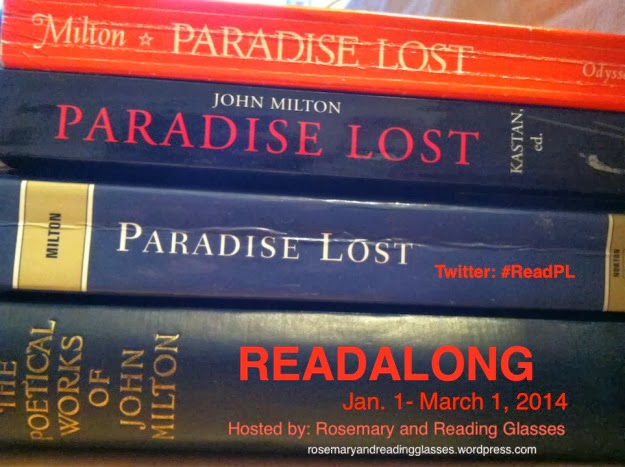 The poet invokes the Muse of astronomy, Urania, as he recalls "evil days" into which he fell (I assume this refers to his blindness), after which Adam requests Raphael to describe the creation of the world after the fall of the rebel angels.   Raphael agrees but notes "to recount almightly works what words or tongue of Seraph can suffice, or heart of man suffice to comprehend."  He also cautions Adam as to his pursuit of knowledge:

"But Knowledge is as food, and needs no less
Her temperance over appetite to know
In measure what the mind may well contain,
Oppresses else with surfeit, and soon turns
Wisdom to folly, as nourishment to wind." (126 - 130)

The account of Genesis is then recounted by the angel.  Such music and singing, sweet and soft, "choral and unison", that greeted creation in a symphony of praise to the Creator.

Again, this part was difficult to understand but I believe Adam questions Raphael as to why Earth is so small compared to the rest of the universe.  Eve, listening thus far, decides to leave at this point.  Raphael then goes into copious detail about Heaven, Earth, the Cosmos, the Sun, etc.

"And for the Heaven's wide circuit, let it speak
The Maker's high magnificence, who built
So spacious, and his line stretched out so far,
That Man may know he dwells not in his own ---
An edifice too large for him to fill,
Lodged in a small partition, and the rest
Ordained for uses to his Lord best known." (100-106)

Yet he ends with another caution about he curiosity of man:

"Solicit not thy thoughts with matters hid:
Leave them to God above; him serve and fear.
……….
Think only what concerns thee and thy being;
Dream not of other worlds, what creatures there
Live, in what state, condition or degree,
Contented that thus far hath been revealed
Not of Earth only, but of highest Heaven."  (167-178)

Grateful for the chance to learn from Raphael, Adam reciprocates by relating the story of his creation to the angel.  Milton's verse is enchanting as he describes Adam waking from a sound sleep in the garden, his discovery of himself and the world around him and the creation of a companion, Eve.  Leading her to their "nuptial bower", there he first feels a passion that transports him beyond power and even beyond reason.  Raphael reminds him that he shares the carnal nature of beasts and not to get carried away with sexual pleasure:

"But, if the sense of touch, whereby mankind
Is propagated, seems such dear delight
Beyond all other, think the same vouchsafed
To cattle and each beast; which would not be
To them made common and divulged if aught
Therein enjoyed were worthy to subdue
The soul of man and passion in him move." (579 - 585)

This carnal pleasure is not in itself true love.  True love elevates, whereas passion lowers the soul.

"What higher in her society thou find'st
Attractive, human, rational, love still:
In loving thou dost well, in passion not,
Wherein true love consists not.  Love refines
The thoughts, and heart enlarges, hath his seat
In Reason, and is judicious, is the scale
By which to heavenly love thou may'st ascend,
Not sunk in carnal pleasure, for which cause
Among the beasts no mate for thee was found." (586-594)

Adam assures the angel there is a union of minds between them, "in us both one soul," then he prods on tender ground, inquiring if angels share love by "looks only."  Blushing a "celestial rosy hue", Raphael reveals that when angels embrace there is no need for "flesh to mix with flesh," and with one last warning for our curious first man, he ascends back to Heaven.


Well, the reading is certainly getting harder and I am having to re-read in parts to get the gist of what is happening, especially when Raphael begins to talk about the universe, mixing Ptolemaic and Copernican theories.  Whew!

I'm not sure yet how I feel about Milton's portrayal of Adam and Eve.  Their literary creation must have been a difficult task to accomplish.  On one hand it's necessary to make them appear innocent and pure before the Fall, yet they also need to be capable of being tempted, so in reality he needs to give them some sort of flaw (is that the word I'm searching for?).  Perfect and yet not perfect.  I'm not sure if it's possible to do this task well.

Honestly, I don't have much to add with regard to these books.  Once again, very enjoyable, yet not as easy to assimilate as at the beginning of the poem, on more levels than just understanding.  I'm interested to see how Milton will handle the temptation of Eve and the Fall, because we all know who is still watching the Garden!