The Adventures of Pinocchio by Carlo Collodi 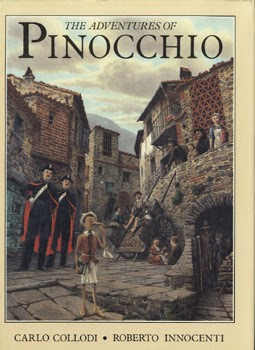 The Adventures of Pinocchio was originally serialized in the two years prior to its publication in 1883, and was written by the Italian children's writer Carlo Collodi.  Initially Collodi had Pinocchio die a rather gruesome death at the end of chapter 15 (which is rather reminiscent of Hilaire Belloc's instructional children's poetry), but his editor urged another ending, so the reader was finally treated to an extra 21 chapters and a wise addition it was!  The book has been translated into 240 languages and remains an icon in children's literature. 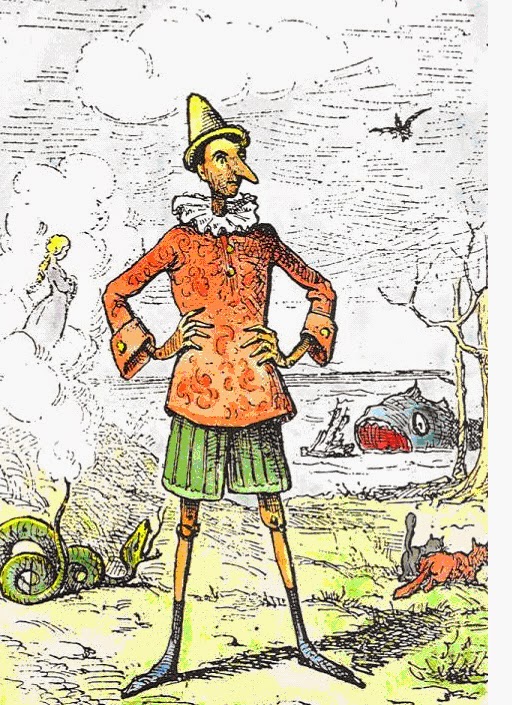 Pinocchio begins as a talking block of wood that is given to a woodcarver named Gepetto, who carves him into a puppet and tries to teach him sense, responsibility and moderation.  Yet instead of being grateful to his creator, Pinocchio follows his own selfish inclinations and calamitous adventures are the result of his self-indulgent, thoughtless decisions.

From being defrauded of his money by a Cat and a Fox, nearly roasted in a fire, hung by his neck on a tree, arrested and thrown in jail, turned into a donkey, and eaten by a fish, one wonders why Pinocchio doesn't learn his lesson and become a good boy. But through these disastrous adventures, we see changes in Pinocchio that are like small flickering lights in the inky darkness of his character.  Initially his zest for fun is nearly uncontrollable but, while it can seem doubtful on the surface, he steadily learns from each adventure, and at each temptation, he is able to put up more resistance.  Pinocchio wants to be good, but his conscience is at continual war with his boyish enthusiasm and his childish lack of forethought and discipline.  The blue fairy, who is like a mother to him and attempts to aid in his moral development, is harsh in her instruction, but Pinocchio benefits from this treatment, knowing she is looking out for his best interests.  And in spite of her firmness, love is always in her actions:


"I saw from the sincerity of your grief that you had a good heart; and when boys have good hearts, even if they are scamps and have bad habits, there is always something to hope for: that is, there is always hope that they will turn to better ways ..."

Eventually Pinocchio learns how dangerous it can be to follow your impulses of the moment, and that responsibility and hard work bring a maturity that is rewarded in a way, that fun and pleasure can never match. 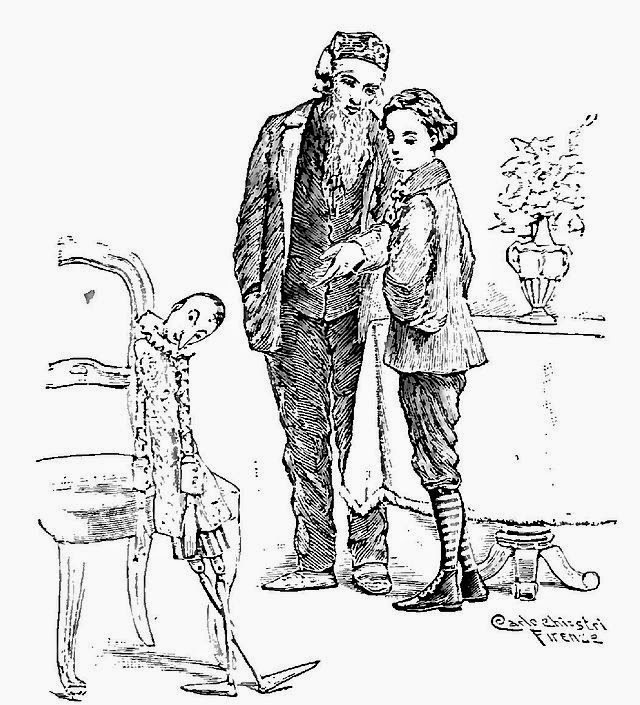 Was I imagining it, or were there a number of Biblical allusions in the story? When Pinocchio buried his money, it reminded me of the parable of the talents, where the servant chooses selfishly to bury his money instead of making good use of it.  With the large fish swallowing Gepetto, of course, this alluded to Jonah and the whale.  And finally, all Pinocchio's catastrophic adventures that come about by his poor life choices and his eventual change of heart, are on parallel with the story of the prodigal son, who finally returns home to the one who truly loves him and has his best interests at heart.


In spite of some of the more bloodthirsty episodes, this was truly a heart-warming story.  That sentence sounds odd, I know, but I really appreciated the reality of Collodi's message.  The company we keep has an enormous influence on the character that we will develop, and each of our decisions in life carry an import, sometimes with consequences that are not easily realized. For me, the most shocking part of the story was the episode where the Cat and Fox hung Pinocchio in a tree expecting him to die, but honestly in some bad decisions the outcome could be death, and it's important to realize that.

Finally, I'll share a few pictures by illustrator Fritz Kredel from my 1946 edition that are rather fun: 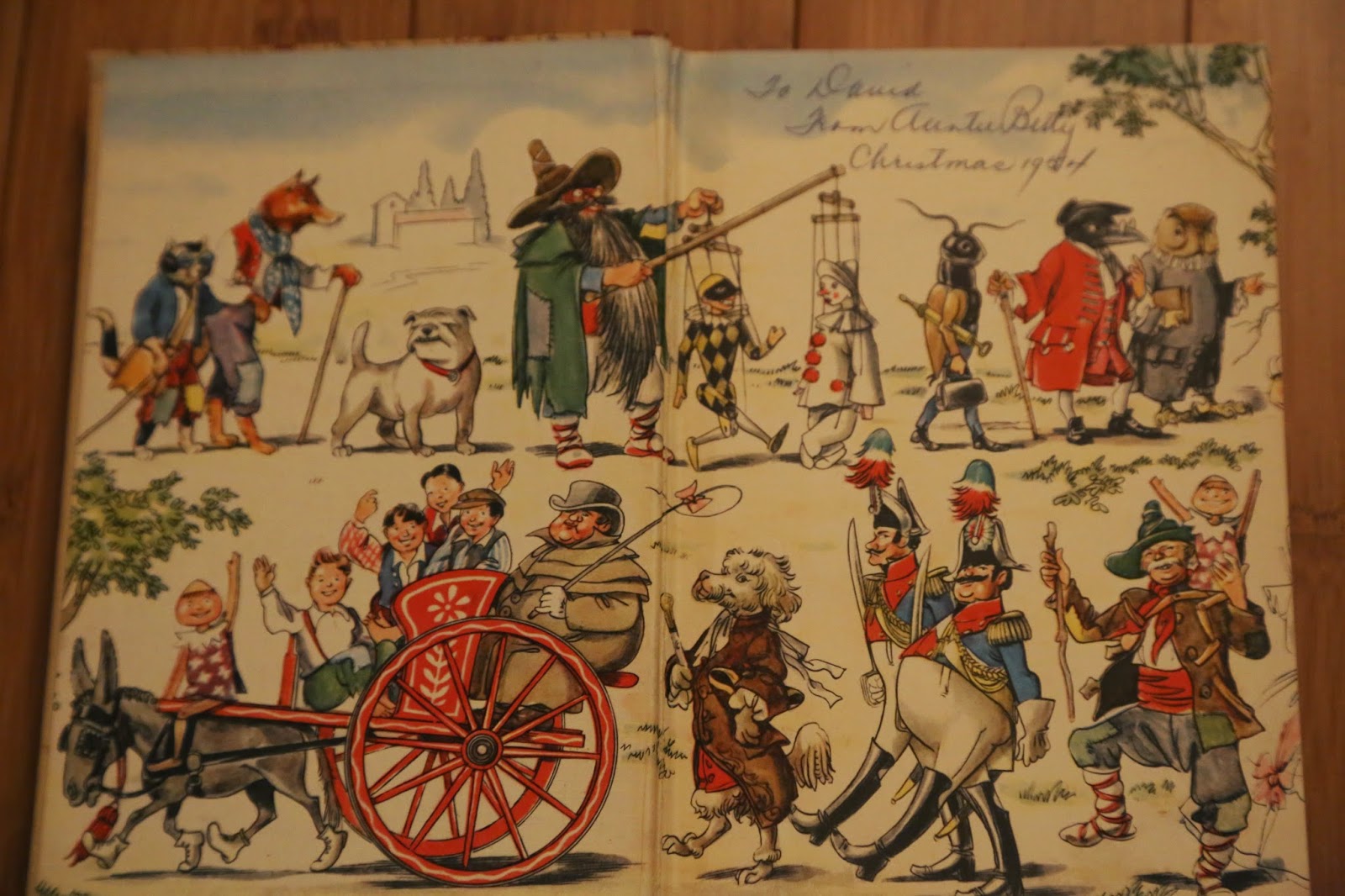 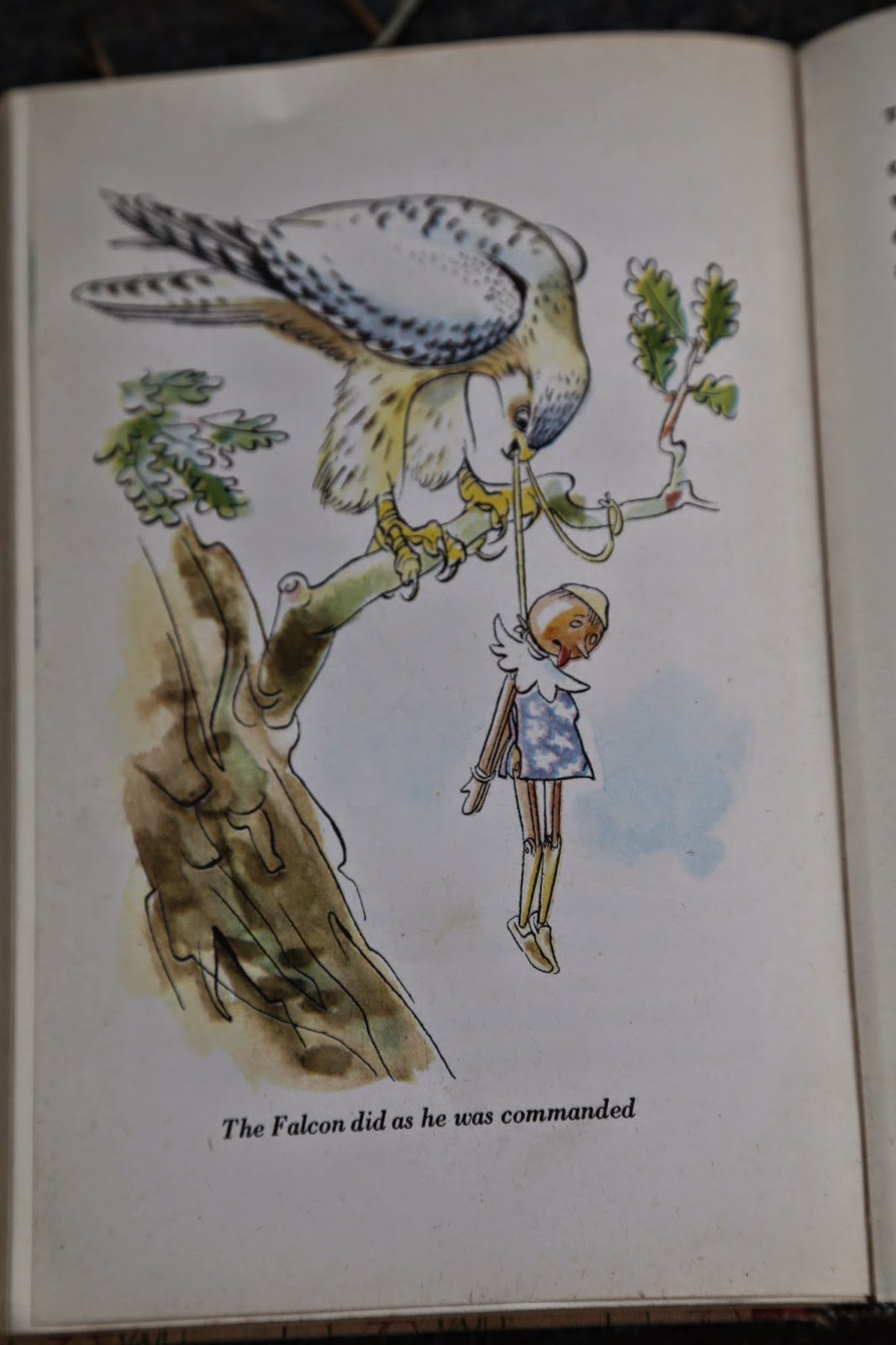 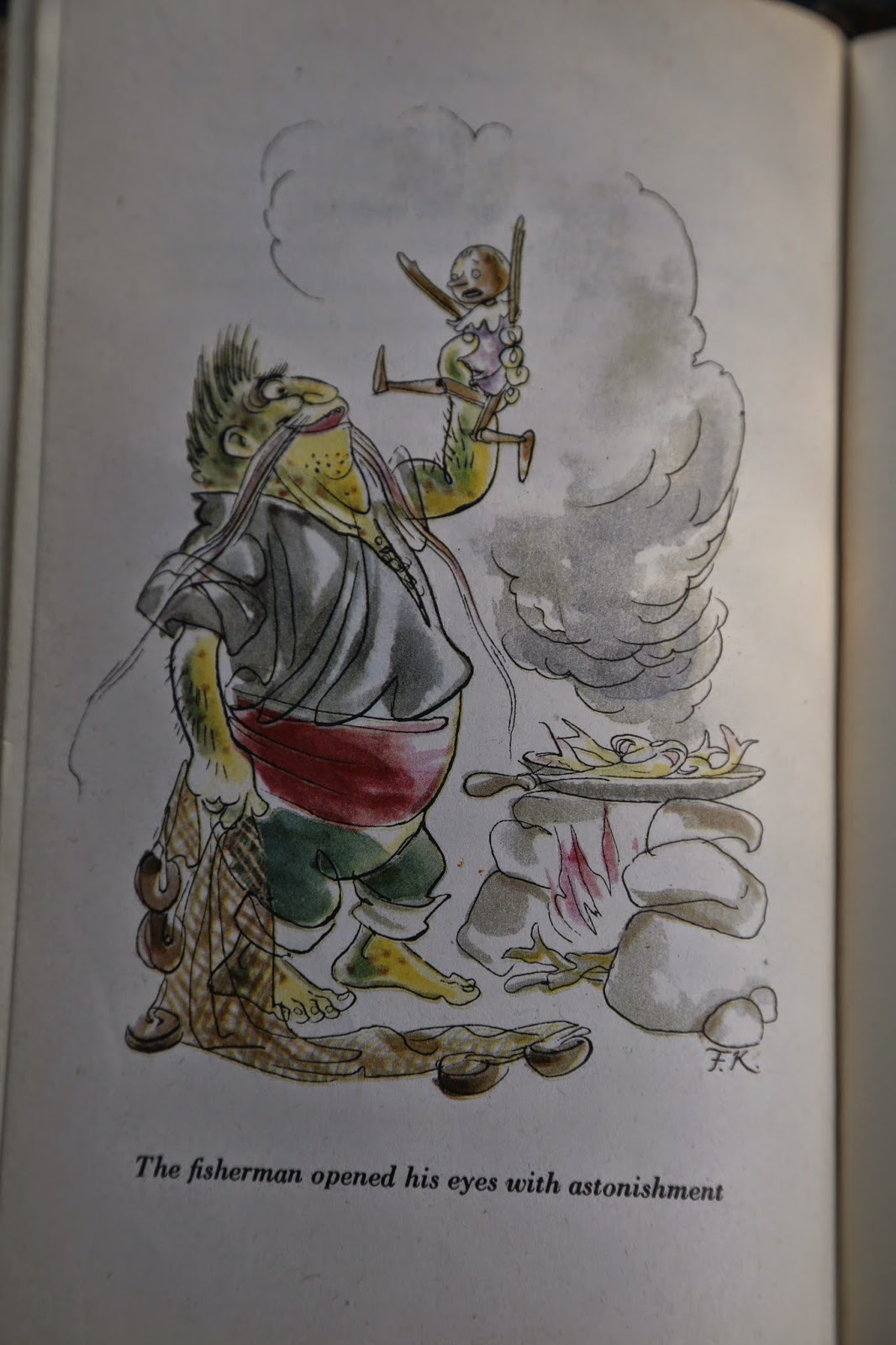 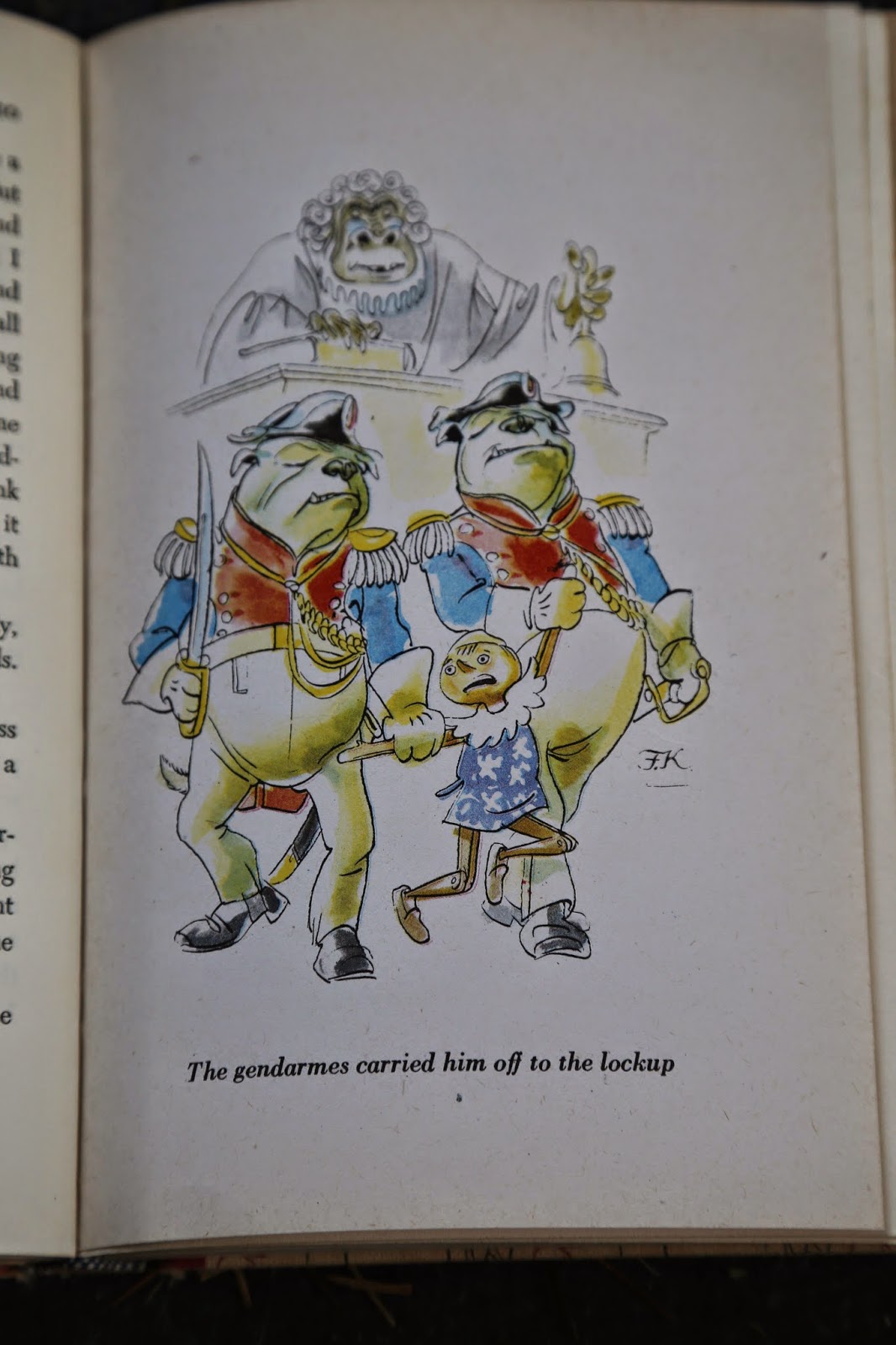 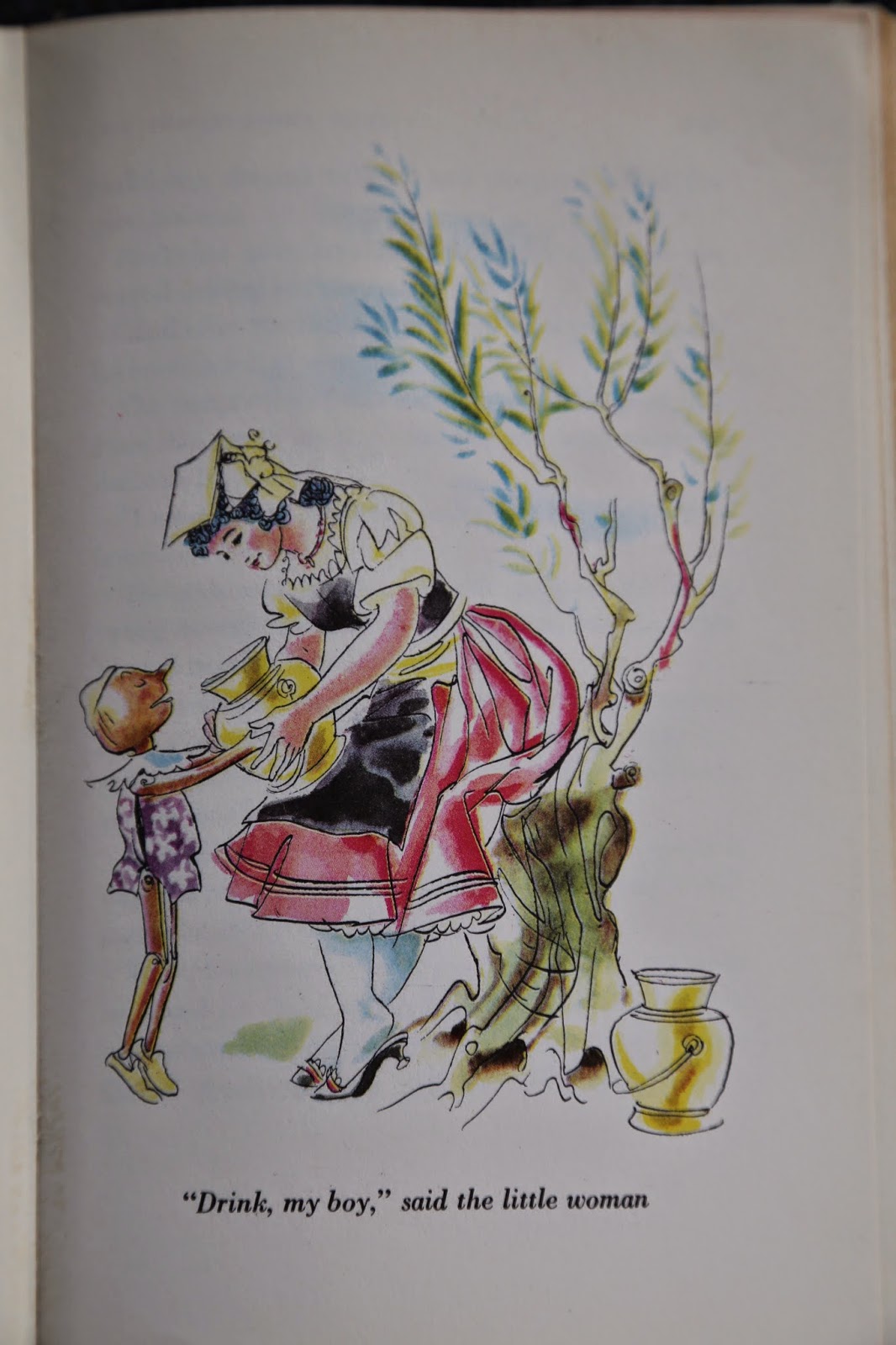 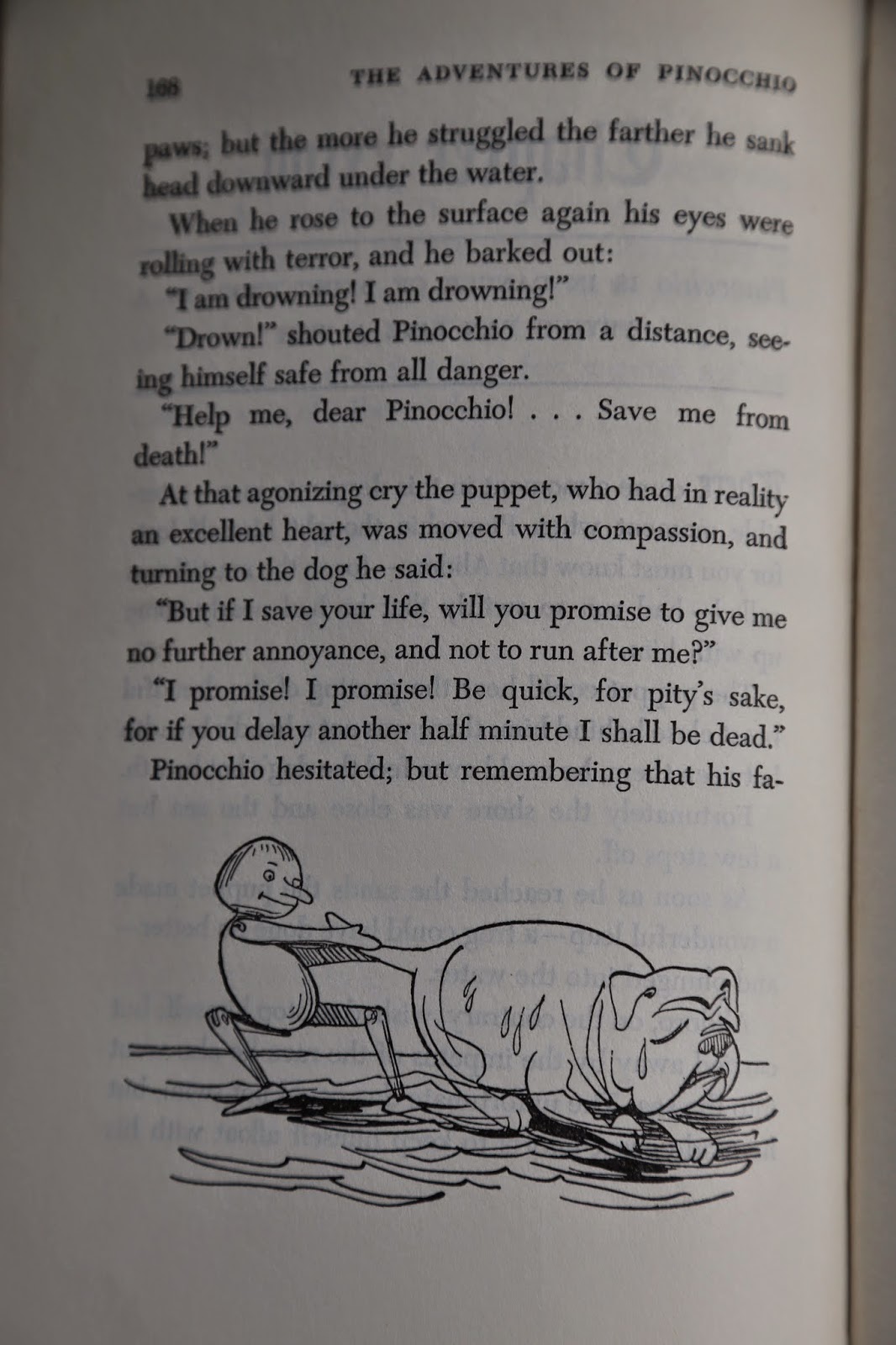 Email ThisBlogThis!Share to TwitterShare to FacebookShare to Pinterest
Labels: 2015 Books, 52 Books in 52 Weeks, Author: Collodi, Back To The Classics Challenge, Books in Translation