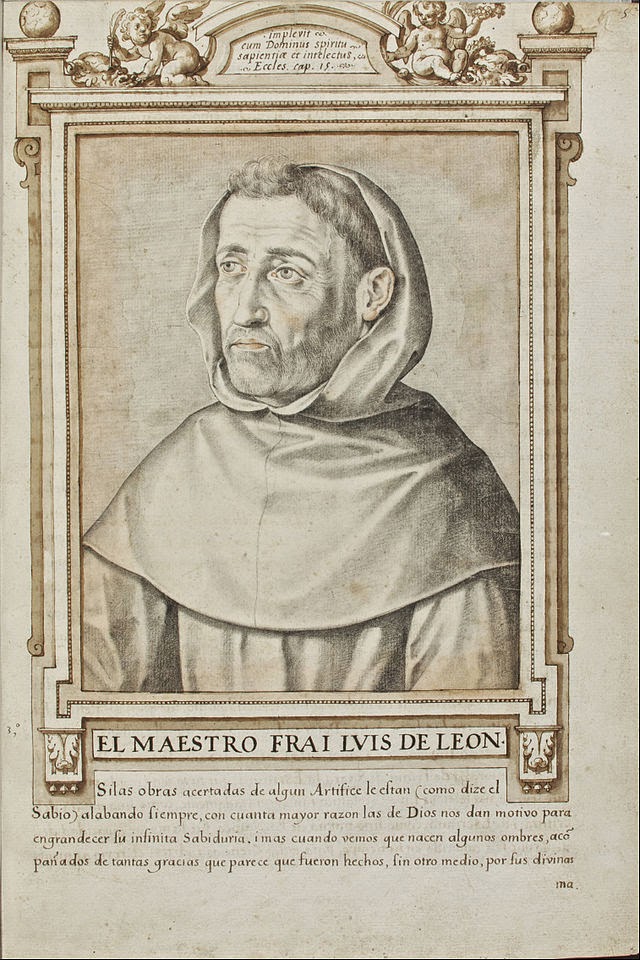 Fray Luis de León was a poet, an Augustinian friar, an academic and a theologian who lived during the Spanish Golden age.  This poem was one of 23 original poems composed by him during his lifetime; he also translated the Book of Job and the Song of Songs into Spanish from the Latin Vulgate, a forbidden act which landed him in prison.

Sadly the text of this poem is too long to include and I can't find any online sources but it is included in the book The Golden Age ~ Poems of the Spanish Renaissance.  Here is an except:


When I contemplate the heavens
embellished and adorned with countless lights,
then look down at the earth
enveloped in dark night
and buried deep in oblivion and sleep,
the love and sorrow I feel
awaken in my breast an ardent longing;
my eyes, become like fountains,
let flow abundant streams,
and at last, in woeful tones, my voice does call:
"Oh, home of so much grandeur,
temple of light, of clarity, of beauty:
my soul was born for your heights,
yet what immense misfortune
keeps it in this vile prison, in the dark?
"What mortal misperception
moves my senses so far away from truth
that, leaving your sacred good,
forgetting they wander, lost,
following vain shadows, illusions of good?
"Man is given over
wholly to sleep, not caring for his fate,
while heaven, with silent steps,
keeps turning round, keeps turning,
stealing from him the hours of his life.
"Oh moral men, awake!
Open your eyes and see the harm you do.
Can your immortal souls,
created for such great good,
survive on shadows and on mere deceit?


de Leon begins with the poet envisaging heaven from his place on earth, yet he quickly reverses the observation by viewing earth from the vantage point of heaven.  From the first viewpoint, heaven looks grand and beautiful but when his perspective is reversed, the earth is seen as a place of devastation and turmoil, as man forgets the purpose of his creation and allows precious time to be stolen from him.  The poet uses an apostrophe to awaken his fellow man the plight of his dying soul and encourages his amelioration.  There is a wonderful weaving of the celestial planets into heaven's fabric, personifying their glory and importance, while communicating divine beauty.

Such a lovely poem and as a bonus, an opportunity to practice my Spanish!

Deal Me In Challenge #8 - Seven of Diamonds