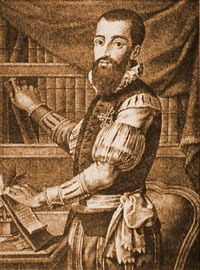 Born in Toledo in 1501, de la Vega was one of the first Spanish poets to introduce Italian verse forms and techniques to Spain.  Mastering five languages as well as having a good aptitude for music, de la Vega eventually joined the Spanish military and died at 35 years old from a wound sustained in battle in Nice, France.  His poetry has been fortunate to be consistently popular during his life and up until present times.

In Sonnet XXIX, de la Vega explores the Greek myth of Hero (Ὴρὠ) and Leander (Λὲανδρος).  Each night Leander swam the Hellespont (the modern Dardanelles) to be with his lovely Hero, who lived in a tower in Sestos by the sea.  She would hang a lamp for him in her high tower to guide his path, however, on a particularly stormy night, the waves buffeted Leander, the wind blew out Hero's lamp, and brave Leander tragically drowned in the raging waters.  Bereft, Hero threw herself from her tower into the pitiless sea, which joined them in death, as it had kept them apart in life.

Brave Leander, dauntless, crossing the sea,
on fire with the lazing flames of love,
when winds blew strong and waters rose and swirled
with frenzied rage and driving, crashing swells.
Vanquished by struggle, nearly overcome,
he could no longer battle with the waves,
and dying because of the love he’d lose
and not because his own life ebbed away,
he raised his weary voice and faintly called,
speaking his final words to roiling waves,
but they ne’er heard his voice, his lover’s plea:
“Waves, I know I cannot escape death,
but let me swim across; when I return
you can vent your wrathful surge upon my life.”

Deal Me In Challenge #11 - Four of Diamonds