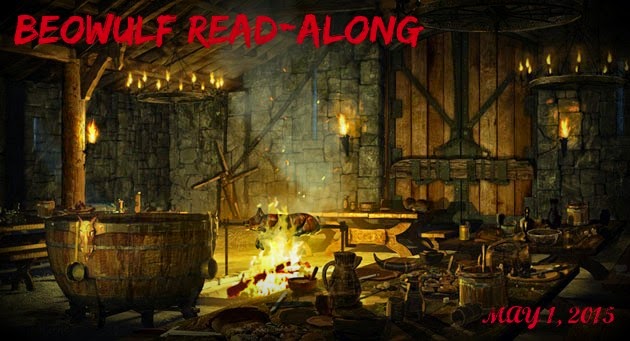 In another week we'll be starting our Beowulf Read-Along and, as promised, this post contains some helpful background information, including my brief summary of Tolkien's essay (for those of you who may not get the time to read it), culture, Anglo-Saxon poetry, Kennings and finally a link to Beowulf read in Old English.

Please feel free to add any information in the comments section that I may have missed; I've read the poem numerous times but I am by no means an expert and still have questions about some of the scenes and behaviour of the characters (as you'll see when I start posting my notes weekly).  I hope that while this is a read-along, it can also be a "read-together" and we'll all be able to add to each other's enjoyment of this wonderful classic!

The Monster and the Critics

There was and is quite a bit of controversy about this poem.  When was it written?  Was Beowulf a real person?  Is it a true rendition of a traditional story, or was it later altered by monks to insert Christian themes?  Tolkien addresses some of these questions in this essay where he essentially criticizes the critics of his time. He basically says that the majority of the critics have stripped Beowulf down until it is merely an historical document and then have examined its faults based on this dissection. He makes the case that it is much more than history ...... It is fable, myth, story, poetry, history, etc. ........ it is all of these things, but yet none of these things in the way that was understood by the pagan world up until the time of Beowulf. In fact, it is showing the merging of the Christian faith with the old pagan ideas, the poet looking back in time. Yet the fusion is not yet complete, which to me, makes the poem even more fascinating:

"It is through such a blending that there was available to a poet who set out to write a poem --- and in the case of Beowulf we may probably use this very word --- on a scale and plan unlike a minstrel's lay, both new faith and new learning (or education), and also a body of native tradition (itself requiring to be learned) for the changed mind to contemplate together ..............."

" ........ But that shift is not complete in Beowulf --- whatever may have been true of its period in general. Its author is still concerned primarily with man on earth, rehandling in a new perspective an ancient theme: that man, each man and all men, and all their works shall die: A theme no Christian need despise. Yet this theme plainly would not be so treated, but for the nearness of pagan time. The shadow of its despair, if only as a mood, as an intense emotion of regret, is still there. The worth of defeated valour in this world is deeply felt. As the poet looks back into the past, surveying the history of kings and warriors in the old traditions, he sees all glory (or as we might say 'culture' or 'civilization') ends in night ......"

You can read the essay here.

The year 410 AD historically marks the withdrawal of the protection and rule of the Roman Empire from Britain.  Increasingly under pressure from barbarian attacks, the British people began to hire mercenaries from Germanic tribes of the European continent.  While this plan was at first satisfactory to both parties, the mercenaries soon began to entertain ideas of expropriating parts of Britain for their own settlements. These tribes of the Angles, the Saxons and the Jutes soon began to conquer parts of Britain, driving the peoples into Wales and other far places.  This is where the name Anglo-Saxon originates.

This history explains the link between the setting of the poem and its poet/author:  Beowulf is from Geatland (modern Sweden), Hrothgar is a Dane (modern Denmark), yet the poet is British.  He is most likely writing about his heritage.

The dating of the poem is unclear.  Because Anglo-Saxon England was not Christianized until around 600 AD, and scholars believe that it was composed sometime between the 8th and 11th centuries, that gives us a possible 400 year window of time.

To give a very simplistic overview of a very complex topic, the pagan culture of Beowulf's time was basically a blood-feud society; if someone offended you, you would simply try to massacre him and his family, which, of course, would require him and/or his relatives to attempt the same. It was a form of justice that was often cyclical and quite bleak.

'Wergild' was money that a man or family could pay in compensation for a killing instead of having himself or one of his relatives killed.


One of the most critical elements of this culture was the relationship between the king (or lord) and his warriors.  The appellation of “ring-giver” in the poem gives us a clue as to how this relationship played out.  In return for loyalty, the king would reward his followers with lavish gifts.  In return for his generosity, the warriors, or “thanes”, would fight for him in times of danger from his enemies.  It was imperative that the lord and his thanes establish this foundation; if it failed in any way, the society surrounding it would collapse.

On a more positive side, this society admired the qualities of loyalty, bravery, courage, and perseverence, although these qualities weren't necessary extolled for the virtue itself but more in the context of allegiances that would preserve the family unit or oneself.


"Wyrd" or fate was understood as a man's destiny: what was going to happen to him without any control on his part. For example, from a modern standpoint, a man might think that by choosing not to go into battle, he would not die. The view of a warrior from Beowulf's culture would be that honour demanded he fight and 'wyrd' would determine whether he lived or he died. My sense is that 'wyrd' was not a negative concept (his 'wyrd' could cause him to have courage in battle and earn great renown). I also think they did not necessarily view death as emotionally as we do now; it just was, and while there may be regret, it was simply part of life. What was most important is that one died with honour and renown.

Treasure Hunt: With the above in mind, keep special note of Beowulf's actions and behaviour in certain situations during the poem. I'm going to ask some questions as we go along ..... :-)

Ancient Anglo-Saxon poetry followed old Germanic verse. The meter goes by stress-count (stressed syllables) rather than syllable count as we are used to in, for example, iambic pentameter (five pairs of syllables, second syllable stressed). Anglo-Saxon verse balances two main stresses in each half of a line.

Alliteration (the repetition of sounds) is often used in contemporary poetry, but the Anglo-Saxons used it even more. Beowulf uses alliteration in almost every line, with a least one alliterating words in each half line, but often more.

A kenning is a poetic device which uses compound words or phrases that identify persons, places, or things in expressive imagery. Usually colourful figures of speech are used to substitute the common name of the noun, an attribute of it, or something closely related to it.

Here is a link to the opening lines of Beowulf read in Old English by Benjamin Bagby:
http://www.youtube.com/watch?v=Y13cES...

In Search of Beowulf (BBC) :  “Historian Michael Wood returns to his first great love, the Anglo-Saxon world, to reveal the origins of our literary heritage. Focusing on Beowulf and drawing on other Anglo-Saxon classics, he traces the birth of English poetry back to the Dark Ages.”  Wood makes a few sweeping statements for dramatic effect, giving information as if we know it, whereas actually we can only guess, but overall this is a very interesting episode, including a glimpse of the original manuscript and a view of a performance of the poem. (approx. 1 hr)

Beowulf - BBC Radio 4 : “Melvyn Bragg and his guests discuss the epic poem Beowulf, one of the masterpieces of Anglo-Saxon literature. Composed in the early Middle Ages by an anonymous poet, the work tells the story of a Scandinavian hero whose feats include battles with the fearsome monster Grendel and a fire-breathing dragon. It survives in a single manuscript dating from around 1000 AD, and was almost completely unknown until its rediscovery in the nineteenth century. Since then it has been translated into modern English by writers including William Morris, JRR Tolkien and Seamus Heaney, and inspired poems, novels and films.”  Three professors from Oxford, King's College London and Worcester College discuss the poem. (43 min.)

*** Excerpts of Beowulf read by Seamus Heaney from the Norton Anthology of Literature site (see #1)  Thanks for the heads up, Dawn!

*** On Translating Beowulf - Seamus Heaney - I love what he says about people forgetting that with poetry, there is an important relationship between sound and meaning

Of course, some of the above links include spoilers, so you may want to wait until after you've read Beowulf to check them out.

I believe that's it for now.  The opening post for our first section will go up on April 30th.

Lo! the glory of the kings of the people of the Spear-Danes in days of old we have heard tell, how those princes did deeds of valour. (Tolkien translation)