The Canterbury Tales ~~ The Merchant's Prologue and Tale

Oh, the poor Merchant.  Married only two months and he swears that there is no one in existence as miserable as he.  His wife's cruelty is unsurpassed, and he urges all men to avoid the matrimonial state if at all possible.

"Never again, never again the snare!
We married men, our life is grief and care.
Try it who will, and he will find, I promise
That I have spoken truly, by St. Thomas,
For most of us -- I do not say for all,
And God forbid that such a thing befall"


"I wolde nevere eft comen in the snare.
We wedded men lyven in sorwe and care.
Assaye whoso wole, and he shal fynde
That I seye sooth, by Seint Thomas of Ynde,
As for the moore part -- I sey nat alle.
God shilde that it sholde so bifalle!"

The Host wittily reparts that since the Merchant is a marriage expert, he must certainly tell his tale.  The Merchant agrees but cautions that he has said all he will of a personal nature.


In Lombardy, in the town of Pavia, lived a well-respected knight named January.  He had remained a bachelor for sixty winters, but in his old age decided that he would like nothing better than to marry. He highly praised the married state in spite of Theofrastus' injunctions and warnings against it.

"This opinion, and a hundred things worse,
Writes this man, may God his bones curse!

But take no heed of all such foolishness;
Defy Theofrastus, and listen to me."

This sentence, and an hundred thynges worse
Writeth this man, ther God his bones corse!
But take no kep of al swich vanytee;
Deffie Theofraste, and herke me.

He goes on to list the value a wife brings to a home, and councils men to always obey their wives in everything.  However, he has a number of requirements for his wife, in that she must be young, so he will not be driven to adultery, and not a widow, so she does not resort to trickery.  He pleads with his friends to help him in his quest, yet stife is stirred up between his two friends, Placebo (meaning "I shall please"), and Justinus (meaning, "the just one"). Placebo defers to January's opinion on the matter, since he is his lord, yet Justinus cautions to choose a wife wisely, taking time and care, otherwise a man may regret his choice as he so rightly knows, as he is married and is subject only to a life of cares and duties.

January prefers Placebo's advice, which echoes his own and, thoroughly obsessed with his goal, begins his search for a wife.


"Exaggerated imagination and constant thought
From day to day became fixed in the soul
Of January concerning his marriage."


Heigh fantasye and curious bisynesse
Fro day to day gan in the soule impresse
Of Januarie aboute his mariage.

He finds the perfect wife in May, a poor yet fair girl, but January is tormented by another thought.  It is said men cannot experience bliss twice and he is concerned that all the happiness he is sure to find with his wife, will then be denied to him in Heaven.  Justinus assures him that will not be the case, and, in fact, he can take comfort in the fact that his marriage will probably be a purgatory.

And so "tender youth has wedded stooping age" and all around them is mirth ..... and, of course, Chaucer's playful spirit.  The wedding is described in detail, but January wishes it to end so he can slake his amorous desires on his new wife. Chaucer ensures that the descriptions of January are unflattering and lecherous, to place the reader into May's viewpoint, and as January spends hours satisfying his passion with her and assuring her that he can do no wrong in the eyes of the law, she finally takes to her room and locks herself in for four days.

Yet there is a serpent in Eden and his name is Damian, the knight's squire who is so enamoured of May "that for the very pain he was nearly crazy."  January, believing that Damian is truly sick, visits him with May, whereupon Damian secretly give her a letter and she learns of his passion for her.

Meanwhile January decides to build a walled garden and he is the only one to possess the key.  But soon after January loses his eyesight, and one day he suggests that he walk with his wife in this garden.  Unbeknownst to him, May allows Damian to slip inside the garden, too.  He climbs up into a pear tree to await their assignation.  Meanwhile, the god Pluto and his queen Proserpine wander by and get into an argument, each giving examples of the treachery, deceit and sin of the opposite sex while supporting their own, thereby showing that the only true, good and perfect being is God. 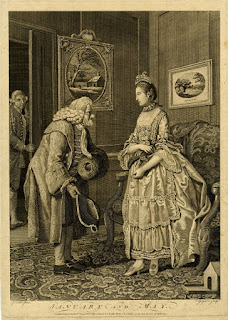 Back to January and May, the latter who convinces her husband to let her climb on his back to get some pears in the pear tree.  While up there, Damian has sex with her, but lo, Pluto returns January's sight and what meets his eyes causes him to explode in rage. Gentle May must reassure her husband that she is the cause of his regained sight and that since he has been blind for so long, what he sees at first is likely to be not at all accurate.  She is able to restore January's faith and the story ends.  I cannot but think that the two of them deserve each other.

What a fabulous tale and one that could be studied in great depth.  Each line could be chewed over, and the allusions are numerous: from Esther to Solomon and from The Romance of the Rose to Venus, there are so many wonderful trails of stories from here that one could be kept busy for ages. January's physical blindness certainly echoes his intellectual blindness towards the matrimonial state.  We may feel sympathy for January that he is unable to see his wife's plotting and tryst, yet even Chaucer mentions that Argus who had one hundred eyes was deceived, again implying that January's blindness is not merely a physical condition, but a condition of the heart.  He willfully chooses blindness and the outcome would not have been different even if he had the use of his eyes.  It reminded me of the play Oedipus Rex by Sophocles, another case of physical blindness paralleling a spiritual blindness.  Bravo, Chaucer!  This is my favourite tale so far!


Behold the Stars - The Merchant's Tale