The Canterbury Tales ~~ The Squire's Prologue and Tale

The Host encourages the Squire to step up and tell his tale, and the Squire, although employing a hesitant and self-conscious manner, agrees. 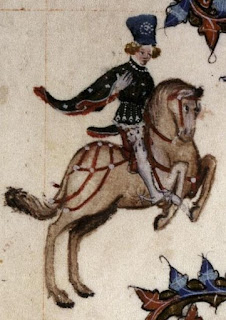 In the land of Tartary, there lived a noble king named Cambuskan (which is perhaps Genghis Khan, although the account of him is more memorable of his grandson, Kublai Khan).  He had two sons and a daughter, whose name was Canace.  Upon the king's twentieth year of reign, he hosts a large celebration but a surprise is in store for him as an unknown knight arrives bearing gifts for the sovereign.  He gives the king a brass steed that can transport him to wherever he wishes, a mirror which can reveal true friends or enemies, a sword that has a deadly power but can heal its wounds as well, and a magical ring which will allow the wearer to comprehend the language of the birds. 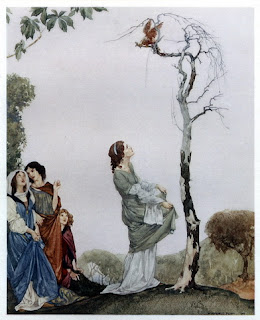 The last gift is given to Canace, whereupon the next morning on her walk, she comes upon a distraught falcon who confesses that she has been courted and then later abandoned by a handsome tercelet.  In her distress, she faints and Canace cares for her, building her a mew hung with the finest shade of velvet blue for faithfulness, and green for duplicity.  The Squire promises to tell how the falcon won back her repentant love, but first he wishes to relate Cambuskan's conquests and to tell of Cambalo who won Canace for his wife. 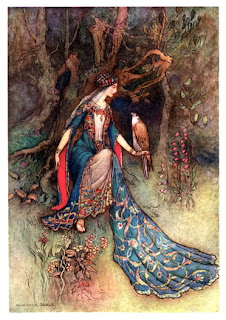 "Apollo whirled his chariot on high
Up through the house of Mercury, the sly ---"

Here the story breaks off and Chaucer leaves it unfinished.  The developing of the story in the initial 708 lines indicates that this tale, if completed, would have been one of the longest tales of the collection.  John Milton was convinced that a conclusion was necessary, writing in his Il Penseroso:

Or call him up who left half told
The story of Cambuscan bold
Of Camball, and of Algarsife ,
And who had Canace to wife,
That owns the vertuous Ring and Glass,
And of the wondrous Hors of Brass,
On which the Tartar King did ride;
And if ought els, great Bards beside,
In sage and solemn tunes have sung,
Of Turneys and of Trophies hung;
Of Forests, and inchantments drear,
Where more is meant than meets the ear.

Edmund Spenser did attempt to finish the tale in his books III and IV of The Faerie Queene, but apparently his verse bears little resemblance to Chaucer.