The Canterbury Tales ~~ The Physician's Tale 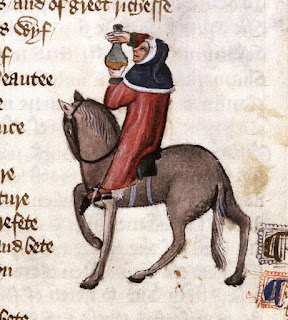 
An illustrious and affluent knight, Virginius, had a daughter named Virginia who was very dear to his heart.  Thus follows a very long narrative on her chastity and how young women should be raised.

One day, while walking through the street, a judge named Appius, spies her and is lustfully determined to possess her.  He enlists the assistance of Claudius, a notable miscreant, to carry out his plan of seizing the maiden. Claudius falsely accuses Virginius of theft, in fact, theft of his own daughter, claiming that she was a servant who was taken from him.  Appius quickly rules in Claudius' favour, decreeing that the girl must be returned to him.  Distraught, her father informs her of the circumstances and states that she must either face death or dishonour.  Virginia chooses her fate:

"And thus addressed her father, unafraid,
'Blessed be God that I shall die a maid!
I take my death rather than take my shame,
So do your will upon me in God's name!'"


She riseth up, and to hir fader sayde,
"Blissed be God that I shal dye a mayde!
Yif me my deeth, er that I have a shame;
Dooth with youre child youre wyl, a Goddes name!" 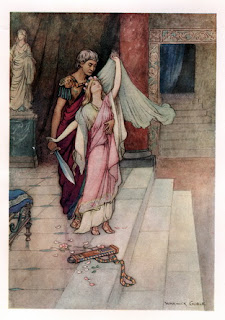 Her father smites off her head and returns it to Appius, at which point the judge orders Virginius' arrest.  Suddenly a thousand men of the town, learning of the treachery committed, seize Appius and murder him and would have done the same to Claudius if Virginius had not pleaded for his exile.

"Here one can see how sin is paid its wages;
Beware, for no one knows how God engages
Or when to smite the sinner, or how the rom
Of conscience will bring terror to the firm
In wickedness, however secretly,
Though none should know of it but God and he.
Be he illiterate or a man of learning,
How soon the blow will fall there's no discerning.
I offer you this counsel; let it make you
Forsake your sins before your sins forsake you."


Heere may men seen how synne hath his merite.
Beth war, for no man woot whom God wol smyte
In no degree, ne in which manere wyse;
The worm of conscience may agryse
Of wikked lyf, though it so pryvee be
That no man woot therof but God and he.
For be he lewed man, or ellis lered,
He noot how soone that he shal been afered.
Therfore I rede yow this conseil take:
Forsaketh synne, er synne yow forsake.

In the Words of the Host to the Physician and to the Pardoner, the Host vehemently berates all unscrupulous lawyers, and states that gifts that seem to us of great worth can also bring harm, depending on the circumstances.  In fact, the Physician's tale has upset him so that he pleads for a cheerful tale from the Pardoner, whereupon the people request a tale of moral goodness and worth.


This tale is based on a tale from Livy's Histories and is also retold in The Romance of the Rose.  While scholars consider it one of Chaucer's weaker tales in structure, the drama certainly carries the reader along.  It reminded me a little of King Lear, in that the evil characters get their just deserts but the innocent partake of their destruction as well, which adds a definite poignancy to the story.