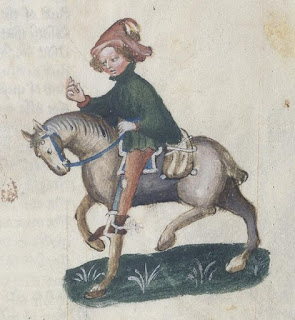 I just bought an Oxford's World's Classics The Canterbury Tales and I must say that I'm not very pleased with it.  It's easily understood but they have completely jettisoned the rhyming pattern, which is imperative for truly enjoying these tales.

So, moving on ........ The pilgrims see a dapple-grey horse and a rider in black, both sweating as if they had ridden from afar.  From a detailed observation of the new visitor, it appears as if he’s a canon of the church.

The canon's yeoman confesses that he saw the pilgrims leave the inn at the beginning of the day and suggested to his master, the canon, that they join up with the party.  The Host appears to enjoy the the well-mannered yeoman and gives them a hearty welcome, inquiring if the canon has a tale to tell.  The Yeoman breaks in, divulging that his master is a great joker, but he is more than a cleric; he is a man who has powers that can turn their road to Canterbury into silver and gold.  In fact, he is an alchemist.

Impressed with the yeoman's description of his master, the Host nevertheless inquires why he is dressed in such a raggedy, slovenly manner.  The Yeoman claims his master is clever, but he uses his brains foolishly.  At the Host's prompting, he reveals that they live in slums and holes and alleys, but during their discussion the canon sidles up and, disturbed by the bent of the conversation, attempts to silence his yeoman, concerned that all his secrets will be revealed.  The Host supports the yeoman, and when the canon sees his reprimands will be to no avail, he flees and the yeoman is free to reveal all.

The yeoman declares that he has been ruined by the science of alchemy, and has borrowed more than he can ever repay.  He then launches into a tirade, listing every substance used and some of the processes used to discover The Philosopher's Stone, which, he states, has not yet been discovered.  Apparently if the alchemist could cause a "citrination," or have the substance turn into a yellow colour, it was on the verge of forming into The Philosopher's Stone, which could then be turned into gold.  However, this myopic search for wealth, severs the alchemist from all that is valuable in life.  He travels around in a threadbare cloak because he is worried that if he is known for his vocation, people will kill him to learn his secrets. His self-importance knows no end, and his wisdom is one of blind self-deception.  Even though his experiments are perpetual failures, he tends to blame others, yet he is still entrenched in his delusions.

"However, all that glitters is not gold,
And that's the truth as we're so often told.
It isn't every apple on the spray
Is good to eat, lament it how you may."

But al thyng which that shineth as the gold
Nis nat gold, as that I have herd told;
Ne every appul that is fair at eye
Ne is nat good, what so men clappe or crye.

The Yeoman tells of a canon who is so evil, that he could infect an area three or four times the size of Nineveh, Rome and Troy.  Yet he does not mean to insult the church itself by telling this tale, for:

"......... God knows, there is some sneaking
Rascal in every house and God forbid
That all were judged by what one madman did.
Slandering you's no part of my intention,
But to set to right the evils that I mention."

"Of every ordre som shrewe is, pardee,
And God forbede that al a compaignye
Sholde rewe o singuleer mannes folye.
To sclaundre yow is no thyng myn entente,
But to correcten that is mys I mente."

In any case, a very honest, yet gullible chantry priest was asked by this canon to lend him money, which the canon repaid within the agreed upon time.  He then asked the priest if he would like to see a miracle, brought about by alchemy. The priest was delighted, and once the ingredients were prepared, the canon threw a crucible into the powder.  With the fire going, the canon made the priest take over.  Yet unbeknownst to him, the canon had a piece of beechwood charred to look like coal, inside which he had placed some silver filings, blocking the hole with some wax.  He soon professed that the priest was doing it wrong, took over the preparations and covertly put his beechwood into the fire, just above the crucible.  The canon performed two more deceitful tricks with the silver, having the priest discover it.  Overjoyed, the priest buys the powder from the canon, but, of course, all his experiments come to naught.

"Gentlemen, think, there has been strife of old
In every class waged between men and gold,
So fierce there's hardly any to be had.
Alchemy has made many people mad
And on my word I think it may well be
The greatest reason for its scarcity ......

So I conclude; since God will not allow
Philosophers to tell their pupils how
To find this stone, no doubt it's better so,
And my advice would be to let it go.
Make God your adversary for a whim
And work at what is contrary to Him
And to His will, and you will never thrive
Though you transmute as long as you're alive.
Aye, there's the point for which my tale began,
And may God prosper every honest man!
Amen."

"Considereth, sires, how that, in ech estaat,
Bitwixe men and gold ther is debaat
So ferforth that unnethes is ther noon.
This multiplying blent so many oon
That in good feith I trowe that it bee
The cause grettest of swich scarsetee ........

Thanne conclude I thus, sith that God of hevene
Ne wil nat that the philosophres nevene
How that a man shal come unto this stoon,
I rede, as for the beste, lete it goon.
For whoso maketh God his adversarie,
As for to werken any thyng in contrarie
Of his wil, certes, never shal he thryve,
Thogh that he multiplie terme of his lyve.
And there a poynt, for ended is my tale.
God sende every trewe man boote of his bale!"

The two characters in this tale. the Canon and his Yeoman, are not part of the original group of pilgrims.  Chaucer appears to have inserted them to address the crime of alchemy and its exploitation and debasements.  Curiously, references to dishonest alchemists were rare during Chaucer's time, as alchemy only began in the 14th & 15th centuries and did not become truly popular until the Renaissance.  Even so, Chaucer's knowledge of alchemy appears to be detailed and accurate as was supported by a 17th century examination of this tale.