The Canterbury Tales ~~ The Manciple's Prologue and Tale 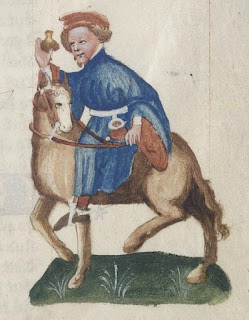 Is it my imagination or, as we are nearly at the end of these tales, are the pictures of the pilgrims improving?  Or perhaps they are only better preserved. A Manciple, for those who don't know (me!), is a purchasing agent for a college, monastery or other institution.


Phoebus, renown for his nobility and skill with bow and arrows, had his dwelling on earth.  An artful singer in his own right, the handsome Phoebus had a crow which he kept in a cage.  Now this crow had snowy white feathers, a song that would rival the Sirens, and could mimic any sound that it heard.

Phoebus also had a lovely wife, who he loved more than he loved his own life.  Jealous for his spouse's love, he ensured that he acted toward her with kindness and manly conduct, confident that she would not stray from his affections.  But a caged bird, wishes for its freedom no matter what its treatment and:

"(A good wife) Should not be checked and spied on, that is plain,
And truly it is labour all in vain
To check a wicked wife; it can't be done.
It's imbecility, say I for one,
For men to waste their labour checking wives,
And so the ancients say who wrote their lives."


Sholde nat been kept in noon awayt, certayn;
And trewely the labour is in vayn
To kepe a shrewe, for it wol nat bee.
This holde I for a verray nycetee,
To spille labour for to kepe wyves:
Thus writen olde clerkes in hir lyves.

One day, when Phoebus was away, his wife sent for her "bully", and proceeded to deceive her husband, as the crow in its cage looked on.  When Phoebus returned, the crow trilled out the words, "Cuckoo!  Cuckoo!" and then informed Phoebus of his wife's indiscretion.  In a towering rage, Phoebus slew his wife, yet immediately remorse came upon him for his deed.

"O fainting trust, O prompting to suspect,
Where was your thought and wisdom to direct?
O every man, beware how you are moved,
Never believe but what is strongly proved!
Strike not too soon, ere you can reason why,
Be soberly advised before you try
To execute your justice and assuage
Suspicion by the acting of your rage.
Alas, a thousand in their hasty ire
Have been undone and brought into the mire."


O wantrust, ful of fals suspecion,
Where was thy wit and thy discrecion?
O every man, be war of rakelnesse!
Ne trowe no thyng withouten strong witnesse.
Smyt nat to soone, er that ye witen why,
And beeth avysed wel and sobrely
Er ye doon any execucion
Upon youre ire for suspecion.
Allas, a thousand folk hath rakel ire
Fully fordoon, and broght hem in the mire.

He verbally flayed the crow for its thoughtless revelation and placed on it a curse, that it would forever wear feathers of black, its powers of speech would be taken, and its lovely voice would be transformed to a croak.

The Manciple conveys the moral of the story, instructing "his son" to hold his tongue, do not use words idly, refrain from superfluous thoughtless speech, guard his tongue, and not be a chatterbox.

"Wherever you may be, with high or low,
Refrain your tongue and think upon the crow."


Whereso thou come, amonges hye or lowe,
Kepe wel thy tonge and thenk upon the crowe.


This tale was perhaps the most confusing of all of the tales.  Of course, Phoebus' wife didn't deserve death for her infidelity, but why was it so terrible for Phoebus to be advised of what she had done?  The crow only told the truth.  Was it the manner in which he told the truth?  Instead of having concern for the feelings of Phoebus and telling him privately, he blurted out the truth like a scandalmonger, with a sort of glee?  I'm really puzzled.  In any case, it is obvious from the start that the Manciple is a merry soul, who likes to tease and twist situations.  Can we even take him seriously?

This story was taken from Ovid's Metamorphoses, which I hope to read next year, so I will be able to do a comparison.