The Oresteia ~ The Eumenides 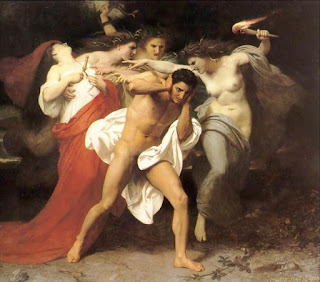 The Eumenides by Aeschylus

"I give first place of honor in my prayer to her
who of the gods first prophesied, the Earth; and next
to Themis, who succeeded to her mother's place
of prophecy; so runs the legend; and in third
succession, given by free consent, not won by force,
another Titan daughter of Earth was seated here. ....."


Time passes and Orestes arrives at the Temple of Apollo at Delphi, still pursued by the Furies.  His conflict continues in tormenting unrelief and he appeals to Apollo for alleviation from his guilt.  He has avenged his father, but in doing so has murdered his mother.  Divine command has clashed with divine decree, and he is helpless to navigate his way through the maze of paradoxical possibilities.  The priestess, Pythia, is shocked to find him in the suppliant's chair with a sword dripping with blood and the sleeping Furies surrounding him.  A spell has been placed upon them by Apollo so Orestes can travel unhampered to Athens, which he does after Apollo absolves him of complicity in his murder of Clytaemestra. But now he must seek Athena for a possible resolution to his dilemma.


Yet the ghost of Clytemnestra awakens the Furies and they pursue their prey to Athens, where Orestes is suppliant, and at the Aeropagus the goddess Athena must intervene with a jury of men to pronounce sentence upon the tormented man.  Immediately Apollo is set up as Orestes' defence, while the Furies appear as the prosecution in support of Clytaemestra's ghost, yet in the end, by a tally of votes, Orestes is acquitted.


The Oresteia :  Agamemnon / The Libation Bearers / The Eumenides

This play is perhaps the most complex and difficult of the trilogy.  The Furies are older than both Apollo and Athena, and it is thought that they symbolize the old pre-democratic system of ancient Greece.  Their childish simplicity of pre-Hellenic times clashes with the more sophisticated Hellenism of Apollo, where reason, intellect and civility are emphasized; to the Furies, the reason why Orestes has blood on his hands is unimportant, only that it is there.  Yet while Apollo's reasoning is more refined, his advice and actions echo a similar cruelty to his counterparts.  Athena must intervene, reconciling man to woman, traditional to modern, and barbarism to culture.  To do this she surprisingly convenes a Jury of Athenian men, effectively entrusting the burden of judgement and the transformation to a more equitable society onto the shoulders of men, deeming certain situations and conflicts too complex to be judged by one individual.

In this case, we do no know if the jury has an odd or even number of members, and these numbers do affect our interpretation, as the votes are balanced and for a decision, Athena's vote is required.  Did she break a tie or did she make one?  In either case, Orestes is acquitted but what is the implication of each scenario?  If Athena's vote was needed to break a tie, it is implied that human justice still cannot resolve the dilemma; in the later case, it would appear humans are still drawn to the old ways and her vote is needed to push them towards a new order.  In either case, the gods are still necessary.

At the point of writing the play, the Greeks had a court system in place, but Aeschylus back-dates it into myth to weave together the old justice system with the new.  The Aeropagus council dominated Athenian government in the 6th century, but by 5th century their powers were curtailed, during the reforms of 462.  It is thought that Aeschylus' trilogy was addressing these reforms, however, there is dissension among scholars over whether he is admonishing the reformers for not respecting the old system or stressing its importance.  In The Eumenides, the Furies are not discarded, rather they are absorbed by the new order and changed into 'the kindly ones'.

Now that I've finished this play, I've read all of Aeschylus' surviving works with the exception of Prometheus Bound, which is attributed to Aeschylus, but just as likely a play written by another playwright, possibly his grandson.   Otherwise, I've read:


I'll move on to Sophocles next, but I think I might read Electra first, as she played a significant role in this trilogy, and Euripides also wrote a play about her, linking the three playwrights around a specific subject.