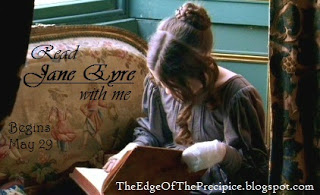 While three days and nights pass, Jane continues in a stupor, confined to a bed in the Rivers' household.  We learn of her impressions of the family, the sisters being warm and inviting, but their brother St John, displays a different character.  His reserve, quick judgements, distrust and attention to outward appearance are readily obvious.  When feeling a little better, Jane makes her way to the kitchen, where she meets Hannah.  All Hannah’s prejudices against Jane are aired and cleared, encouraged by Jane’s firm resolution and straightforward honesty.  They become fast friends.  At tea with St John and his sisters, he attempts to learn more about Jane, while she examines him.  His features are described as very handsome and harmonious, but underneath she senses a negative energy about him.

“….. (he) scarcely impressed one with the idea of a gentle, a yielding, an impressible, or even of a placid nature.  Quiescent as he now sat, there was something about his nostril, his mouth, his brow, which, to my perceptions, indicated elements within either restless, or hard, or eager …….

Had he been a statue instead of a man, he could not have been easier…..”

Jane gives an alias of Elliot, tells them about Lowood school but refuses to reveal anything about Thornfield Hall or the happenings there.  St. John relents in his questioning, promising to find her employment.

Jane begins to develop an intimacy with Diana and Mary, but with St John any deeper connection seems impossible and she has many observations why this is so, including his frequent absences from home, his reserved nature, his lack of interaction with nature, his uncommunicativeness and his lack of peace.

“But besides his frequent absences, there was another barrier to friendship with him: he seemed of a reserved, an abstracted, and even of a brooding nature.  Zealous in his ministerial labours, blameless in life and habits, he yet did not appear to enjoy that mental serenity, that inward content, which should be the reward of every sincere Christian and practical philanthropist ……”

Yet while Jane criticizes her benefactor, she also sees parallels in their situations:

“….I was sure St John Rivers --- pure-lived, conscientious, zealous as he was --- had not yet found that peace of God which passeth all understanding: he had no more found it, I thought, than had I, with my concealed and racking regrets for my broken idol and lost Elysium --- regrets to which I have latterly avoided referring, but which possessed me and tyrannized over me ruthlessly.”

Finally she is offered employment by St John as a schoolteacher at a girls' school he established for the poor in the village of Morton.  As the sisters must make their own way in the world since their father’s death and are soon to leave for B----, Jane accepts.  The death of the Rivers’ uncle for a moment gives them new hope for their prospects but his mean spirit leaves them little in his will and they all leave for their respective posts.  Jane’s new life begins.

Jane’s new home is a little cottage in Morton, set aside for the schoolteacher.  As she takes up her new task, she thinks of her old life and begins to come to terms with her decision to leave Thornfield, realizing that if she had succumbed to her sentiments and passions, her inner soul would have been damaged, and for a short time of bliss, she would have paid with a lifetime of regret.

St John visits one day and while revealing his past struggles and his plans for his future, a girl appears, causing him to blanch.  She is more beautiful than description, and while she attempts to establish an intimacy with St John, he is rather implacable and refuses her invitation to see her father.  It is the heiress. Rosamund Oliver of Vale Hall, but St John seems impervious to her charms.  Jane is intrigued by the exchange.

Initially I wasn’t really looking forward to this part of the book, but I’m finding it compelling this time.  I’m quite loving the contrast between St John and Rochester, and appearance and character.  Rochester’s looks are not outwardly pleasing and his behaviour is not always what would be considered socially pleasing, yet Jane senses that there is a hidden part of his nature that is constant and earnest and has great depth, only it has been corrupted by his life circumstances.  With St John, however, although he is pleasing to look at, and his behaviour is outwardly acceptable, there is a hardness and lack of empathy to him, that does not bode well for any sort of formed intimacy or deep relationship.

I also like how Jane, while seeing faults in others, also sees them in herself.  While she recognizes that St John has not found peace in his faith or life, she knows that she struggles in this area too and why.

Since Tom’s comments in my last post about seeing Jane as an unreliable narrator, I have been trying to, but failing miserably.  She simply seems too insightful and too willing to criticize herself for her own failings to be unreliable, or at least from the view of a conscious authorial unreliability.  I'll keep trying though.