Far From the Madding Crowd by Thomas Hardy 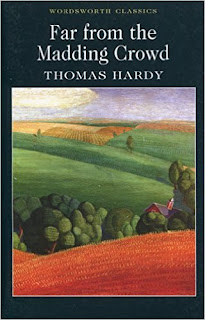 "When Farmer Oak smiled, the corners of his mouth spread till they were within an unimportant distance of his ears, his eyes were reduced to chinks, and diverging wrinkles appeared round them, extending upon his countenance like the rays in a rudimentary sketch of the rising sun."

Would you like to read a book with the setting in southern rural England, populated by stoic farmers, simple and often comical peasants, one that explores complex relationships between men and women of that time?  It sounds like a wonderful beginning doesn't it?

Set in the fictional English county of Wessex, Gabriel Oak is a respectable and reliable farmer who loves the unreachable Bathsheba Everdene, a woman who disparages his hard-working, yet common lifestyle and refuses his proposal of marriage.  When Oak finds himself ruined financially, he must depend upon Bathsheba to give him work and a way to reclaim his reputation.  A thoughtless whim on the part of Bathsheba leads to an obsession in the case of Mr. Boldwood, a neighbouring landowner, and Sergent Troy, a jaunty philanderer, seduces Bathsheba's servant, Fanny, without much remorse, then deliberately bewitches Bathsheba with his rakish manner and manipulative personality, not to mention his unparalleled swordsmanship.  After a fling in the town of Bath, they marry and he sets himself up at the farm as a rather lazy landowner, but lo!, Fanny Robin returns and Troy decides that he has never loved anyone as much as Fanny, and Bathsheba is as interesting as dirt to him.  His heart is loyal, his mind is captivated by only one and no other.  Tragedy devastates Troy causing him to wander senselessly until it is thought that he is drown in the sea.  But no!, another dramatic twist; he returns, wonders why he ever left Bathsheba and appears to want to re-enter her life.  Sound rather nutty?  It is.


Yet amongst the dramatic scenes and the emotional mood swings of the characters, Hardy manages to convey a bold impression of the area and a deep understanding of the characters.  And I can't quite figure out how he does it.  If I examine the characters and their actions individually, I have all sorts of criticisms about their development and plausibility.  However, if I take the book as a whole, I feel that I have inhabited the county of Wessex with a familiarity that is startling; I recognize the types of characters who reside there, their passions and motivations.  Instead of painting a classical picture with bold lines, bright colour, and detail, Hardy has given us an impressionist canvas perhaps from which up close, is muddy and obscure, yet when one steps back, the big picture comes into focus.


As for the strong and spirited Bathsheba, while on the surface Hardy appears to elevate her to function adeptly in a man's world, nevertheless there is an underlying feeling of mockery in his treatment of her.  Although she runs a farm with men subservient to her direction, she is often needing the advice of the stoic, yet devoted, Gabriel Oak, and in the end, her feelings and passions are captured by Troy, a man who, to any astute and respectable woman, should be recognized as a charlatan and a gambler.  Instead of showing good sense and integrity, Bathsheba allows herself to be enslaved by him.

I've been a die-hard Hardy-avoider for years, not wanting to partake in the depressed nature of his stories, but I'm glad I've chosen to dip my toes into his narrative, exploring his richly created world.  A close inspection of the characters and the period drama shows an imbalance within the work, but nevertheless his prose shines with rich descriptions and elaborate detail.  Hardy shows man in his paradoxical state, both in harmony and conflict with nature, and in sympathy and enmity with each other and himself.

Far from the madding crowd's ignoble strife
Their sober wishes never learn'd to stray;
Along the cool sequester'd vale of life
They kept the noiseless tenor of their way.

From Thomas Gray's Elegy Written in a Country Churchyard (1751)