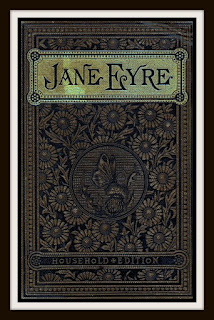 "There was no possibility of taking a walk that day."

An orphan child badly treated by rich relatives.  A grim and lonely school for girls where pestilence hangs in the air.  A Gothic mansion that houses a she-demon and a brooding and sardonic man who, underneath his caustic demeanor, hides a heart that waits to be awakened.  Who could resist such a story?

Well, not I, that's for sure, and I jumped right into Hamlette's Jane Eyre read-along that began in June 2016.  It was probably my fifth read of this enduring story, and this time it particularly captured my imagination and heart.  A tale of enduring love and a crossing of the class boundaries was particularly compelling in a time when no one seems to be getting along and division is rife between those would could easily be friends given more tolerance and grace for each other.


We first meet Jane as an orphaned child, living on the charity of her relatives who heap upon her verbal abuse.  Finally, she is shipped off to a disreputable girls school, Lowood, and though the abuse continues from the head administrator, Mr. Brocklehurst, Jane forms a dear friendship with another girl, Helen, who teaches her quiet perseverance, mercy and forgiveness, while exemplifying a steadfast faith in God.  Upon reaching womanhood and taking a post as a governess at Thornfield, Jane encounters the master, a dark, taciturn, mysterious man, Edward Rochester.  Although her heart is awakened, Jane does not waver from her ideals, knowing with a certain wisdom that behaving with dignity and moral principles is the only way to inner peace and true happiness.

While the beginning of the book, chronicling Jane's childhood, appears to have little to do with the later plot, it plays an important role in understanding the development of her character and her place in society.  As a reader, we are always reminded of her struggles to be treated with respect and dignity, to be treated as an equal, as a soul created by God instead of as a product of a social hierarchy.

"Do you think I am an automaton? --- a machine without feelings? and can bear to have my morsel of bread snatched from my lips, and drop of living water dashed from my cup?  Do you think because I am poor, obscure, plain, and little, I am soulless and heartless?  You think wrong!  --- I have as much soul as you ---- and full as much heart!  And if God had gifted me with some beauty and much wealth, I should have made it as hard for you to leave me, as it is now for me to leave you.  I am not talking to you now through the medium of custom, conventionalities, nor even of mortal flesh: it is my spirit that addresses your spirit; just as if both had passed through the grave, and we stood at God's feet equal --- as we are!"


My most treasured memories of Jane Eyre is Brontë's amazing ability to make the characters so intrinsically human, instead of perfect, implausible characters.  While Rochester's machinations can be rather shocking, you can understand how a man who has had little chance to develop a good steady character and is used to giving free reign to his passions could end up a slave to them.  His emotions drive him without finer moral values to guide him.  Jane, on the other hand, while falling deeply in love with the man she sees he can become, can clearly recognize the pitfalls of ungoverned behaviour. While her heart cries out for him, she is mature and sensible enough to see where wrong actions would take them.  Instead of increasing their love, they would be left with nothing but emptiness.  She would rather remember the depths of the love that they shared in its purest form than degrade herself by being guided solely by passion.

Once again, thanks to Hamlette for this most excellent and measured read-along that allowed me to soak up the story and to spend time with two of my most favourite characters in the pages of literature!