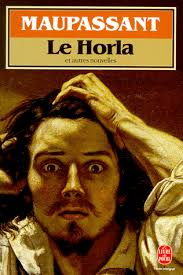 What a lovely start to the story.  The narrator describes himself reclining on the lush grass of his yard under a gorgeous plane tree.  He loves his house and the region of his forebearers close to Rouen. The Seine flows lazily alongside his garden and in early afternoon he spots a parade of ships drawn by a tugboat, including an impressive Brazilian three-mast ship, gleaming white and he is filled with such joy at the sight that he salutes the magnificent vessel.

Five days later, he claims that he has been seized by a fever, a mysterious force that makes him feel rather sad more than sick.  His despair grows and in spite of seeing a doctor, it continues to worsen.  Finally, he decides to take a short trip to set him aright, visiting Monte St. Michel, and while he does return refreshed and certain that he is cured of his malady, he relates a curious experience that he had at the monastery.


Our narrator is perplexed.  Surely if rational beings other than ourselves existed we would have encountered them by now.  The monk, however, gives a perceptive reply:

"Do we see even the hundred-thousandth part of what exists?  Take the wind, for example, which is the greatest force in nature, which knocks men down, demolishes buildings, uproots trees, sends up the sea in mountains of water, wrecks cliffs, and throws mighty ships against the shoals, the wind that kills, that whistles, that moans, that groans ---- have you ever seen it, and can you see it?  It exists, regardless."


With the sickness coming back upon him, the man agonizes with nightmares, and the unexplained consumption of water and milk from his carafes in the morning.  Escaping to Paris, he has an unsettling experience with a doctor, a clairivoyant, which further cements his mental exploration of other-worldly phenomenon.  Yet again when he returns home he experiences an increasing unease and a consciousness of an entity which has invaded his home, apparently from the Brazilian schooner that he glimpsed months ago.  He is distaught, deranged and we can only guess at the outcome as he attempts to dispose of this being who has not only penetrated his home but his soul. 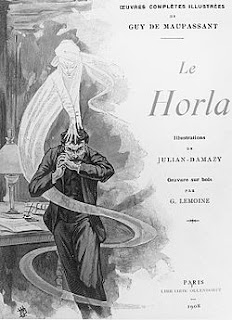 It may sound odd to say, but this was one of the more delightfully suspenseful short stories that I've read in awhile.  While I believe that we cannot control what happens to us in life, we can control our reactions to it, yet in this story, the man's self will is appropriated to an extent that he loses part of who he is.  His mind, while not necessarily possessed, is subjugated by a force that is able to manipulate his thinking and apprehending.  What could be more terrifying? Complete loss of control.  It makes an extraordinarily creepy tale.

Next week, I have a children's classic on slate, The Tanglewood Secret by Patricia St. John.  With my unexpectedly busy life that has left me little time for reading, I just hope I can finish it and review it in time!

*** Note:  I did read ¼ of this short story in French before my brain gave out and time began to run away from me.  An accomplishment nonetheless, but it made me realize that I need much more practice with this excellent language!

Week 3 - Deal Me In Challenge - Four of Clubs