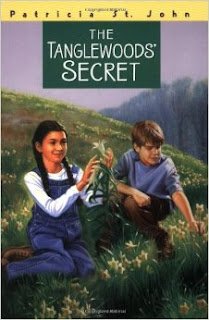 "Philip and I lived with our Aunt Margaret in a white house on the side of a hill."

Philip and Ruth reside with their aunt and uncle while their parents are away.  While Philip is a responsible and thoughtful eleven year old, Ruth, at nine, is impulsive, adventurous and sports a fiery temper.  Her relationship with her aunt is tenuously cordial and often she is disciplined due to some tantrum or neglected chore.  On one of the children's daily rambles, they meet a poor boy named Terry who knows everything about their favourite pastime, birdwatching, and the three spend some lovely days together.

A chance meeting with Mr. Tandy, a shepherd looking for his lost lamb, gives Ruth a glimpse of the Good Shepherd.  Slowly her perceptions change and she begins to see not only her behaviour in a new light, but those around her.  A new-found grace and understanding pervades her soul, yet Ruth carefully guards this precious secret.  Yet when tragedy strikes and Ruth wonders why the Good Shepherd can't put things aright if he truly does love them, she finds that her secret is one that needs to be shared.

This was a lovely, simple little book that demonstrates how the grace of God can change even the most selfish of hearts, and how disinterested selflessness can alter those around us, enacting a tangible transformation within community.

Apparently, the edition of the book I read is a sanitized version that was printed to simplify the language for modern readers.  Blah!  I'd now like to get my hands on the original text.  I'd imagine that the story would be more rich and meaningful without being dumbed down for today's audience.

Curiously, next week, I'll be reading George Orwell's essay, Politics and the English Language, which will address the dumbing down of the English language. Stay tuned!