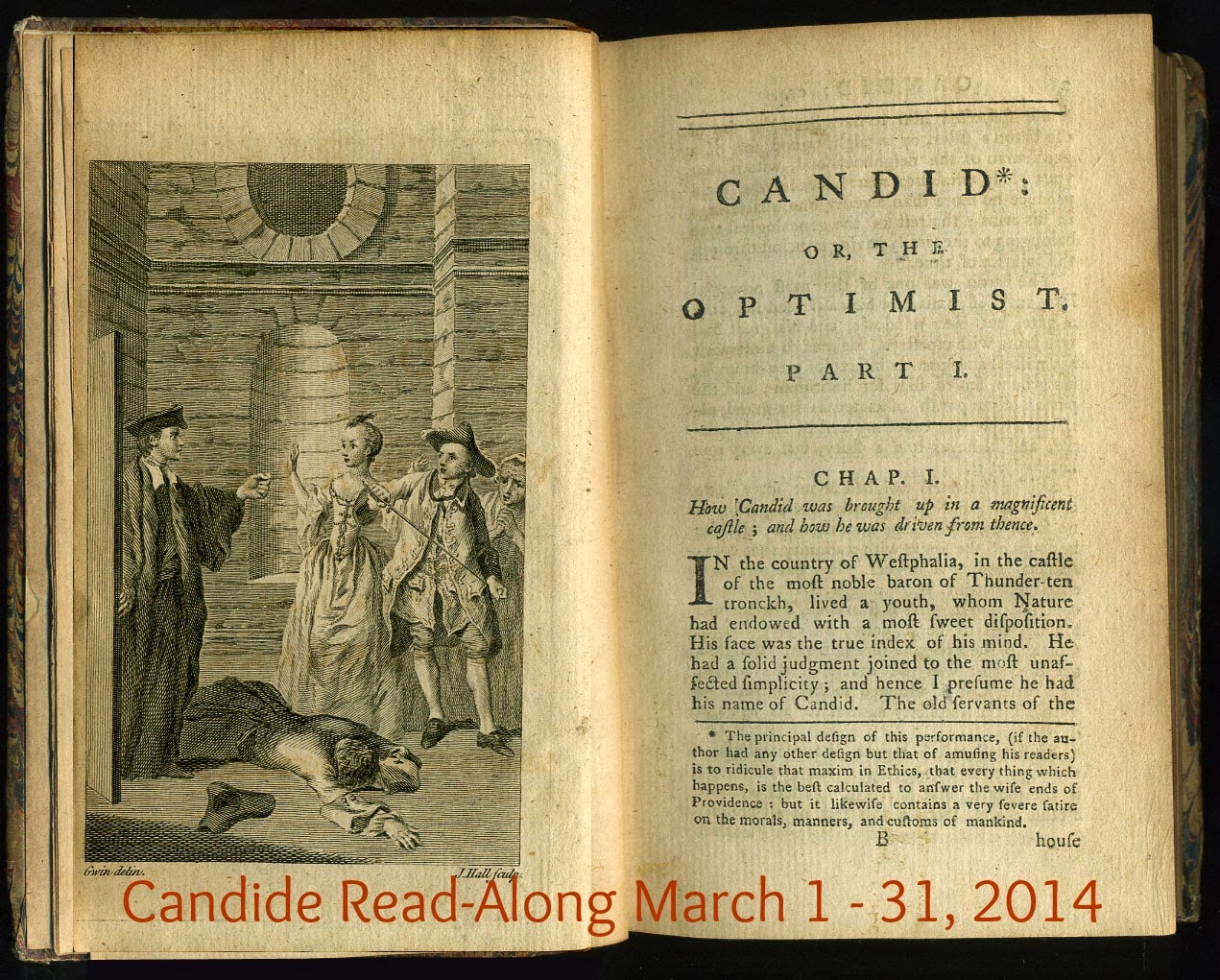 Don Issachar bursts into the room and tries to stab Candide but instead Candide kills him by skewering him with his sword.  He is horrified but suddenly the Grand Inquisitor turns up and Candide kills him as well.  The old woman suggests that they flee on three horses (adding the information that she is only able to sit on one buttock) and, after gathering jewels and money, they set off for Cadiz.  When gone, the Holy Brotherhood enters the house, buries the Inquisitor in a beautiful church but throws the Jew on a garbage heap.

In a village on their way, Cunégonde is robbed,  -------- the suspect, a Franciscan friar.  They sell one of their horses to a Benedictine.  When they reach Cadiz, Candide's superior knowledge of drills lands him in the army which is to fight against the Jesuits in Paraguay as they rebel against the King of Spain.  As they cross the Atlantic, Candide hopes the New World will be an improvement over the Old, yet Cunégonde expresses little hope of this.  The old woman claims that her misfortunes surpass everyone's and begins to speak.

Voltaire makes a distinction between the classes and a commentary on the brutality of man and their harsh treatment of each other bases on these distinctions.  The purpose of his portrayal of the Franciscan friar as a thief and the Benedictine monk as cheap I'm assuming is another stab at the church, other than the obvious observation that he doesn't care for either, as the one is concerned with materialism and the other, economy.  The gradual change in Candide's philosophy continues:  "I must admit that it's possible to complain about some of the things that go on in our world, from both a physical and a moral point of view."  He is no longer Pangloss' parrot but he hasn't yet abandoned hope of "the best of all possible worlds", instead expecting to find it in another location.

The old woman introduces herself as the daughter of Pope Urban X and the Princess of Palestrina.  She was raised in splendour and opulence, and betrothed to marry a prince but, when he is murdered by his mistress, she sets off with her mother on a ship to their estate near Gaeta.  On their way, they are captured by pirates, strip-searched, she is raped by the captain, then taken to Morocco as slaves.  Upon arriving there, they find the country in the midst of a civil war; everyone in their party is slaughtered except for the princess, who collapses and when she wakes, finds a man on top of her complaining of the loss of his testicles.  He carries her to a house, puts her to bed and then tells of how he was castrated and lived the life of a eunuch in her own palace.  She is amazed and shares the sad fate of her mother, upon which he recognizes her as the princess he had brought up.  Lately he had been helping a Christian power to wipe out other Christian powers and was in Morocco to purchase ammunition.  He promises to take her back to Italy but instead takes her to Algiers and sells her to the dey of the province, whereupon she catches the plague is sold numerous times until she finds herself with an aga who was sent to defend Azov against the Russians.  When facing starvation, their Janizary guards are persuaded by a beautiful sermon of a Muslim cleric, not to completely kill the women but instead, to cut off a buttock each to eat.  The Russians arrive and kill the soldiers, yet they cure the women and the woman is sold to a Russian Boyar; later she escapes, crosses Russia, works as a barmaid and wants to kill herself numerous times.  She finally becomes a servant in Don Issachar's house where she meets Cunégonde and claims that all men has often cursed their own lives and each thinks that he is the most miserable man in the world.

I'm assuming the Muslim cleric spouting beautiful sermons while the Moroccans butcher each other is another religious dig by Voltaire, but since the cleric was in Azov, and actually trying to help the women in the harem from being killed, I'm not sure that there's a connection.  As for the old woman, she has obviously suffered horrific trials at the hands of many.  Her destiny until the end of the tale, is never controlled by herself; she is always the pawn of another.  Yet, in spite of her tragic story and circumstances, she has survived and appears to have developed a strong character.  She claims to love life but seems confused at why she would want to hold on to something that has been mostly repellent to her:  "What could be more stupid than to persist in carrying a burden that we constantly want to cast off, to hold our existence in horror, yet cling to it nonetheless, to fondle the serpent that devours us, until it has eaten our heart?"

After the woman finishes her story, Cunégonde's respect for her increases and together, she and Candide poll the passengers and find out, indeed, all their lives have been miserable.  Candide wishes Pangloss was still with them so he could offer objections to his theories.  They land in Buenos Aires and the governor, Don Fernando, takes a fancy to Cunégonde and proposes marriage.  The old woman urges Cunégonde to accept, therefore making Captain Candide's fortune.  A ship comes into the harbour with a magistrate who is in pursuit of them.  The old woman tells Cunégonde to stay as she has nothing to fear since the murder was not at her hands, yet she urges Candide to flee.  Candide escapes with his valet Cacambo, a pragmatic young man who suggests that they find the Jesuits and fight for them instead of against.  When they reach the first border post into Paraguay they are taken to the Jesuit commandant and, lo and behold, it is Cunégonde's brother.  They speak as if brothers, telling each other the news since their last parting.

Again, Voltaire gives another nobleman a ridiculously inflated name (Don Fernando d'Ibaraa y Figueroa y Mascarenes y Lampourdos y Souza) to mirror Spanish noblemens' ridiculously inflated egos and pretensions.  The old woman continues to instruct the couple, but it appears her favour sways to Cunégonde; she sees it is in Cunégonde's best interests to marry Don Fernando, so she pushes for the marriage and pressures Candide to flee.  Candide exhibits more signs of rejecting Pangloss' philosophy when he mentions wishing to argue with him over it.  Cacambo shows himself both clear-sighted and resourceful.  And, as usual, Voltaire makes a point to vilify religion, showing the Jesuits not only fighting in the midst of a war, but also possessing slaves.

The baron relates his story and they embrace, the baron calling Candide his brother and saviour.  When he asks after his sister, Candide reveals his plans to marry her and the baron erupts into a rage.  Candide's pedigree is not good enough.  The baron strikes him with the flat of his sword, upon which Candide runs him through, killing him outright.  Cacambo runs in, dresses Candide in the baron's robe and hat, and they escape.  Candide is overwhelmed with sorrow at his act and that he may never see the fair Cunégonde again.  They come across two naked women being chased by monkeys who are biting their buttocks.  Candide, thinking he is saving the young women, shoots the monkeys but finds he has misjudged and that the monkeys are one-quarter Spanish and lovers of the ladies who are weeping and wailing over the dead corpses.  Cacambo convinces Candide this is not an unusual relationship and they camp in the forest to sleep, but upon awaking, find themselves trussed and bound.  The two girls have told the Oreillons about them and there are about fifty of them, labelling them as Jesuits.  Cacambo craftily tells the natives that they are about to eat friends, not enemies, and, in fact, they have just killed a Jesuit.  The Oreillons leave to discover the truth and return to release them.  Candide is relieved to have killed the Baron, without which they would have presently been eaten.

The contradiction between religion and war continue.  The Jesuits are supposed to be missionaries but they are portrayed as fighting a political war. Hierarchy is also made to appear foolish when, initially, the Baron treats Candide like a brother, then turns into a enemy as soon as he finds that they could actually be related by marriage.  Cacambo's practicality and ingenuity comes to the rescue as he formulates a successful escape plan and his quick-thinking gets them out of their precarious situation with the Oreillons.  I'm not even sure I want to analyze the situation with the monkeys.  Does the fact that they are one-quarter Spanish, make them nearly human?  What (if any) commentary is Voltaire making on the Spanish?  The natives?


What do you think?

Hmmm ……. I'm not sure ………..  Voltaire obviously has a dinosaur-bone to pick with the Church.  Even with the Muslim cleric, while he does portray him giving a sermon for the benefit the women of the harem, they lose half their buttocks and, meanwhile, his Moroccan brotherhood are butchering each other on the streets.

I do agree that all the characters are such extremes (I've labelled them as caricatures), that it is difficult to take them seriously.  Every single friar, priest, or cleric is avaricious, ignorant, violent, etc.  That is like saying, for instance, if there is a serial killer who is a truck-driver from Kentucky, that all Kentucky truck-drivers are serial killers.  It breaks the laws of basic logic.  Even Candide, though sweet and innocent, has now killed three people and, honestly, is rather stupid.  Do I think Voltaire is shooting his argument in the foot?  Yes.  Perhaps the readers of his time could connect more to his writing but this reader, needs to be able to connect with characters in a novel to be able to be open enough to accept their arguments.  So far, I find the narrative silly and slightly irritating.  I'm wondering if this was simply a rant by Voltaire and his first (or second or third) intention wasn't necessarily to connect with his audience.

However, I'm still hoping that it will redeem itself somewhat at the end.  Yes, hope springs eternal!