"Was she beautiful or not beautiful?" 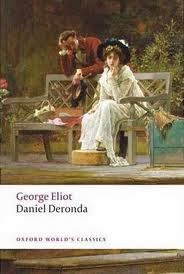 Gwendolyn Harleth is a "spoiled child", a young woman with average prospects yet with high hopes of attaining respectable social standing and monetary comfort. While scorning the traditional avenues of marriage, she desperately wishes for a meaningful, vibrant life, even though she is unsure of how to attain it.  Gambling, parties and equestrian amusements, fill her time, with little thought of other peoples wants, needs or struggles.

Daniel Deronda is a respectable moral young man and the ward of Sir Hugo Mallinger.  When he first spies Gwendolyn, his disapproval of her gambling and later, the same quiet censure of some of her actions, leads her down a path of introspection and causes her to question the manner in which she is living her life.  Yet the changes in her character do not come soon enough and, due to her family's sudden monetary troubles, she contracts a marriage to Henleigh Mallinger Grandcourt, the nephew and heir of Sir Hugo.  She views the marriage as an escape from poverty and a stepping stone to a life of leisure and a respectable position in society.  Instead she gets a husband with a twisted soul, bent on breaking her will as he would a horse or a wild animal.  He glories in her struggles, fear and his ability to control her actions.


A second plot winds itself through Gwendolyn's, as Deronda internally questions the manner of his birth and the identity of his parents.  Not wishing to bring up a subject that may be uncomfortable for Sir Hugo, he suppresses his curiosity, yet aches for familial connections and history.  Upon saving a Jewish singer from drowning, his relationship with her takes him down the path of finding his true heritage.

Eliot forces the reader to examine some of the social issues of that time.  Without money, young women could only hope to find work in low paying positions, such as governesses or companions, or perhaps choose less respectful avenues as singers or actresses.  Without an inheritance or a family who was financially able to support them, an advantageous marriage was really the only protection for women of this time period.

She also treats the subject of Jewish identity and culture with surprising dexterity and perception.  While they are portrayed with an obvious sympathy, Eliot makes each character real, from the philosophic and idealistic Mordecai, to the money-loving pawnbroker, Cohen. The struggle of a people against prejudice and pre-judgement is plainly explored with touching sincerity and insight.  Mordecai's longing to see the Zionist hopes for a Jewish homeland established adds a deeper more complex examination of an issue that was of particular interest to the author.


I found that certain parts of the novel dragged, and the plot suffered numerous bumps, but again Eliot tackled such diverse issues, making the writing of the novel an epic task, so I can forgive some of the inconsistencies. Her obvious intellectual curiosity, and her enlightened opinions made the read informative as well as enjoyable.  Daniel Deronda is a book that prods you to think and ponder even after the last page is turned.

"In the chequered area of human experience the seasons are all mingled as in the golden age: fruit  and blossom hang together,; in the same moment the sickle is reaping and the seed is sprinkled; one tends the green cluster and another treads the wine-press.  Nay, in each of our lives harvest and spring-time are continually one, until Death himself gathers us and sows us anew in his invisible fields."