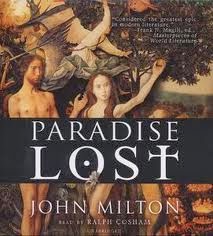 "Of Man's first disobedience and the fruit
Of that forbidden tree whose mortal taste
Brought death into the world and all our woe,
With loss of Eden, till one greater Man
Restore us and regain the blissful seat,
Sing, Heavenly Muse, that on the secret top
Of Oreb or of Sinai didst inspire
That shepherd who first taught the chosen seed
In the beginning how the heavens and earth
Rose out of Chaos; or, if Sion hill
Delight thee more, and Siloa's brook that flowed
Fast by the Oracle of God, I thence
Invoke thy aid to my adventurous song,
That with no middle flight intends to soar
Above the Aonian mount, while it pursues
Things unattempted yet in prose or rhyme."


Samuel Johnson declared that Paradise Lost is "a poem …… which respect to design may claim the first place, and with respect to performance, the second, among the productions of the human mind ….."   It is a poem about the rebellion in Heaven and the ejection of the fallen Angels; it is about the Garden of Eden, the deception of the snake, and the fall of Man.  But it is much more than all these points, separately and as a whole. Just as Satan falls into the depths of the burning pit of Hell, Milton delves into the depths of the human Soul and conversely soars to the heights of the God of Heaven, weaving a tapestry of images and profundity that will leave the reader amazed and speechless.  Initially, the reader believes he is following Milton's lead, not realizing until later that he is part of the tapestry itself and Milton's words have become part of his soul.

In this poem, Satan's actions are especially shockingly compelling as we follow his fall from Heaven, his brash, swaggering leadership of the fallen angels, and then his quest to best God to get his spiteful, yet senseless, vengeance.  We think of Hell as a place, full of fire and brimstone, burning and torment, and while Milton gives Hell a location in this poem, it is much more than that.  Satan carries Hell inside him.  It torments him, not only with thoughts of rage and hate and revenge, but almost more effectively with thoughts of despair, regret and impossible hope.  Conflicting emotions scrape and tear at him incessantly.  For him, Hell is not external; it is an internal condition from which he cannot escape.

Milton's superlative crafting of the character of Satan has led many people to believe he was perhaps too successful, making Satan the most exciting and heroic character of the poem.  William Blake stated that "the reason Milton wrote in fetters when he wrote of Angels and God, and at liberty when of Devils and Hell, is because he was a true poet, and of the devil's party without knowing it".  It is certainly true that Milton intimately understood "the devil's party".  Like us all, he experienced sin within himself and within others:  rage, treachery, deceit, the desire for power, etc.  And with his astonishing talent, he was able to craft a character that is perhaps the most Satan of all the Satans in the history of literature.  Milton's Satan is capable of tricking not only Adam and Eve and angels, he is able to trick the reader of Paradise Lost as well, in such a subtle manner that certain readers admire his bravado, respect his machinations, and feel sorry for his plight.  While Milton's brilliance in this area of the poem is breath-taking, it is also unsettling.  C.S. Lewis in his lectures on Paradise Lost, approaches this issue in a dexterous manner, saying that if the reader chooses to admire Satan, he must only realize what he is admiring:


"No one had in fact done anything to Satan; he was not hungry, nor over-tasked, nor removed from this place, nor shunned, nor hated ---- he only thought himself impaired.  In the midst of a world of light and love, of song and feast and dance, he could find nothing to think of more interesting than his own prestige …..


……… Satan lies about every subject he mentions in Paradise Lost.  But I do not know whether we can distinguish his conscious lies from the blindness which he had almost willingly imposed on himself ……


…….  What we see in Satan is the horrible co-existence of a subtle and incessant intellectual activity with an incapacity to understand anything.  This doom he has brought upon himself; in order to avoid seeing one thing he has, almost voluntarily, incapacitated himself from seeing at all.  And thus, throughout the poem, all his torments come, in a sense, at this own bidding  …..


……. the design of ruining two creatures (Adam & Eve) who had never done him any harm, no longer in the serious hope of victory, but only to annoy the Enemy (God) whom he cannot directly attack ……


…….  From hero to general, from general to politician, from politician to secret service agent, and thence to a thing that peers in at bedroom or bathroom windows, and thence to a toad, and finally to a snake  -------  such is the progress of Satan.  This progress, misunderstood, has given rise to the belief that Milton began by making Satan more glorious than he intended and then, too late, attempted to rectify the error.  But such an unerring picture of the 'sense of injured merit' in its actual operations upon character cannot have come about by blundering and accident.  We need not doubt that it was the poet's intention to be fair to evil, to give it a run for its money ---- to show it first at the height, with all its rants and melodrama and 'Godlike imitated state' about it, and then to trace what actually becomes of such self-intoxication when it encounters reality."


Yet in spite of the beautiful images painted amid the stark reality, Milton seems to rush the end of the poem, packing the whole Old Testament into the last two books and surprisingly uses a more direct narrative instead of showing the reader with his usual subtle yet beautiful verse.  Lewis remarks on the lack of genius in the last books in comparison to the earlier wonderful artistry of the poem:

"It (Paradise Lost) suffers from a grave structural flaw.  Milton, like Virgil, though telling a short story about the remote past, wishes our minds to be carried to the later results of that story.  But he does this less skillfully than Virgil.  Not content with following his master in the use of occasional prophecies, allusions, and reflections, he makes his two last books into a brief outline of sacred history from the Fall to the Last Day.  Such an untransmuted lump of futurity, coming in a position so momentous for the structural effect of the whole work, is inartistic.  And what makes it worse is that the actual writing in this passage is curiously bad.  There are fine moments, and a great recovery at the very end.  But again and again, as we read his account of Abraham or of the Exodus or of the Passion, we find ourselves saying, as Johnson said of the ballad, 'the story cannot possibly be told in a manner that shall make less impression on the mind'.  ……….  If we stick to what we know we must be content to say that Milton's talent temporarily failed him ……."


Yet even with its flaws, Paradise Lost is an epic that is at once majestic, beautiful, poignant, tragic and instructive.  It opens a window into the Biblical story of the fall, allowing the reader to live the experiences and emotions first-hand.  What a task Milton took on and how well he succeeded!  I predict this read be my favourite of the year.  My feeble summary only covers the surface of its significance; you will only have to read it yourself to discover its grandeur!