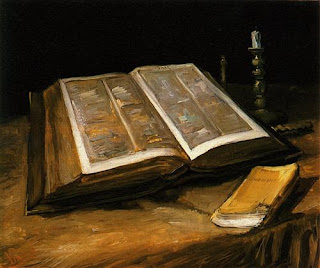 Number Of Books You Read: 50

Genre You Read The Most From: Classics

Best book you read in 2015: The Canterbury Tales.

Book you were excited about & thought you were going to love more but didn't: On The Road by Jack Kerouac.  I had read his The Dharma Bums and just loved it, but On The Road simply didn't have the charm of the former.  It was a chronicle of a bunch of irresponsible young men getting drunk and stoned across America.  Just not for me.

Most surprising (in a good or bad way) book you read in 2015: In a good way, Up From Slavery by Booker T. Washington.  I was a little fatigued with the slave narratives, but Washington, without anger or bitterness, presented such a balanced view of the issues, and a way for the people coming out of slavery to really move forward and feel like they were building useful lives for themselves.  He definitely goes on my hero list.

Book you "pushed" the most people to read (and they did) in 2015:   Well, I'll say Beowulf because I hosted a read-along of it.  I had a great time; I hope everyone else did too!

Best series you started in 2015? Best Sequel? Best Series Ender:  I read through Jane Austen's novels and was so pleased to revisit old favourites and finally read the two that I had never read before (Sense and Sensibility and Persuasion).  Pride and Prejudice remains one of my all-time favourites.  I also developed a new appreciation for both Mansfield Park and Northanger Abbey.

Favorite new author you discovered in 2015:  Michel de Montaigne.  He is such a unique thinker and his writings are so personal that after you read a few of his essays, you feel like you're talking with an old friend (although one you conversely often argee and disagree with).  He's fabulous!

Best book from a genre you don't typically read/ out of your comfort zone:  Montaigne's Selected Essays.  I don't usually read essays, even though I want to read them.  Montaigne was a blast!  I can't wait to read more of him.

Most action-packed/thrilling/unputdownable book of the year: Dracula.  We seek him here, we seek him there, we very-credulous-and-always-one-step-behind men seek him everywhere.  Is he in heaven or is he in hell?  That damn'd elusive Count Dracula!

Book you read in 2015 that you are most likley to reread next year: I will definitely read The Canterbury Tales again, but not next year.

Favorite cover of a book you read in 2015: Probably this Ignatius Press edition of Gulliver's Travels by Jonathan Swift. 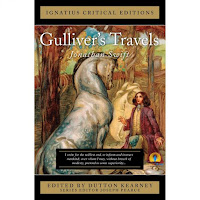 Most memorable characters of 2015:  Michel de Montaigne (Selected Essays), Hamlet (Hamlet), Jean-Jacques Rousseau (Confessions - the mould was broken when God made him), Beowulf (Beowulf) Basil Grant (The Club of Queer Trades), Gandhi (The Story of My Experiment With Truth)

Most beautifully written book read in 2015: The Forgotten Daughter.  I was truly blown away by Snedeker's writing.  Not only does she create a believable and vibrant setting, she brings to life the characters within it.  The true degradation and loss of liberty under slavery resonates in this book, yet without becoming maudlin.  An excellent read.

Most-thought provoking/ life-changing book of 2015: The Story of My Experiments With Truth by Mohandas Gandhi

Book you can't believe you waited UNTIL 2015 to finally read: The Canterbury Tales

Favorite passage/quote from a book you read in 2015: There were so many and this is perhaps not the favourite but it's a valuable one that springs quickly to mind: "...... Nature has given it (life) into our hands, trimmed with so many and such happy surrounding, that we have only ourselves to blame if we feel it a burden, and if we waste it unprofitably ......  And yet I am resigned to lose it without regret; but as a thing that is by its nature losable, not as if it were a troublesome burden ...... Not to hate the idea of death is properly becoming only in those who enjoy life .... I enjoy it doubly as much as others, for the measure of enjoyment depends upon the more or less attention we give to it .....  The shorter my possession of life, the fuller and deeper must I live it ...... Rather should we study, relish and ruminate it, in order to give adequate thanks to him who bestows it upon us."  ~~ Michel de Montaigne

Shortest/longest book you read in 2015: Narrative of the Captivity and Restoration of Mary Rowlinson and The Christmas Child by Hesba Stretten (both 52 pgs.) & Confessions by Jean-Jacques Rousseau (676 pgs.) (although the longest would have been  Mein Kampf [710 pgs.] if I'd read the part about the National Socialist Movement)

Book that shocked you the most: Mein Kampf by Adolf Hitler.  It is astounding and more than a little unsettling that he grew to rule a nation. His delusional hatred of Jews and non-Arians was not cloaked at all.  It made me realize that if it could happen once, it could happened again.

OTP of the year: Every year I have to look up what OTP means.  Sigh!   ;-)  Elizabeth and Darcy from Pride and Prejudice!

Favorite book you read in 2015 from an author you've read previously: Price and Prejudice by Jane Austen and Notes From the Underground by Dostoyevsky

Best book you read in 2015 that you read based solely on a recommendation from someone else: The Adventures of Pinocchio by Carlo Collodi.

Best world-building/most vivid setting you read this year: Hamlet by William Shakespeare.  I read it twice this year thanks to Hamlette's read-along!

Book that put a smile on your face/was the most fun to read: The Club of Queer Trades by G.K. Chesterton.  I just realized that I didn't read many fun books in 2015.  I'll have to rectify that next year!

Book that made you cry or nearly cry in 2015: The Forgotten Daughter by Caroline Dale Snedecker.  Again it communicated the hopelessness of slavery while giving hope in another way.  Just excellent.

Hidden gem of the year:  The Brubury Tales by Frank Mundo.  I'm not a fan of modern fiction and I'd expected these tales to be definitely weaker versions of The Canterbury Tales, but I was absolutely blown away.  His poetic skill resonated throughout the stories and his insight into human nature was exemplary.  I will read this one again, for sure.

Most unique book you read in 2015: The Journal of William T. Sturgis.  It was refreshing to see a man who acted with honesty and integrity towards the native people, yet also held them accountable to basic human behaviour.  Quite a man.

Book that made you the most mad: Northanger Abbey by Jane Austen.  I wanted to smack most of the characters.

New favorite book blog you discovered in 2015:  We Went Outside and Saw The Stars (Keely reads the type of books I absolutely love and compiles thoughtful and insightful reviews) and Gently Mad  (Sharon reads a very eclectic panorama of books and her reviews are always thought-provoking)  I know that I've forgotten somebody .....

Favorite review that you wrote in 2015: Wow, this is tough.  I'm going to choose my Montaigne essay posts, of which there are three, plus an introduction.  These reviews took up an inordinate amount of time, but I'm glad that I have little snapshots of all the essays I read.

Best discussion/non-review post you had on your blog: Ooo, I don't know.  Perhaps my  Join the Beowulf Read-Along post where we had some discussion of translation and other fun Beowulf-related things. I didn't do many other survey-type posts this year.

Best event that you participated in: The Hamlet Read-Along at The Edge of the Precipice.  I also enjoyed my Beowulf Read-Along, and my read with O of The Canterbury Tales was a blast.  It was so helpful to read her excellent posts as we read along.

Best moment of bookish/blogging life in 2015:  Meeting new bloggers and responding to comments on my blog.

Most popular post this year on your blog: My The Canterbury Tales/The Brubury Tales Project post with 371 views.  After that my Ecco Homo review at 311 views.  Honourable mentions go to Sonnet XXIX by Garcilaso de la Vega and Christianity and the Survival of Creation by Wendell Berry.  I was amazed at the top winners this year.

Post you wished got a little more love:  This year I can't answer this question.  A number of posts that I was certain wouldn't be popular received tons of views, and my others had a good number of views as well, so I'm happy. :-)

Best bookish discovery:  I was excited to purchase C.S. Lewis' English Literature in the Sixteenth Century, one of the Oxford History of English Literature volumes.  I also scored The Riverside Chaucer in a beautiful hardcover edition, but after I'd finished reading The Canterbury Tales.

Did you complete any reading challenges or goals that you had set for yourself at the beginning of this year: I completed Back to the Classics Challenge, Reading England Challenge, Jane Austen Project, The Canterbury Tales/The Brubury Tales Project and the Books in Translation Challenge.  I failed at The Pre-Printing Press Challenge, 52 Books in 52 Weeks (reached 50 books), my TBR Pile Challenge, reading only 9 of the 12 books I should have, and the Deal-Me-In Challenge.  I also hardly read any C.S. Lewis for that project, read only a couple of Shakespeare for my Shakespeare project and did not read any Trollope from my Barsetshire read.  Woe is me!

One book you didn't get to in 2015 but will be your number 1 priority in 2016: The History of Napoleon Buonaparte by John G. Lockhart.  Good grief, this is ridiculous!  I'm fascinated by Napoleon and I absolutely love this book, but I've been working on it for a couple of years and something else always takes my attention away from it.  I simply MUST finish it this year.

Book you are most anticipating for 2016 (non-debut): Metamorphoses by Ovid, and The Faerie Queene by Edmund Spenser

Series ending/a sequel you are most anticipating in 2016: The Last Chronicles of Barset by Anthony Trollope.  No, you're not seeing double from last year.  I'm leaving it here because I can't think of another book and I hope to get to Trollope in 2016, but knowing me and what I have planned, I can't see getting to the end of the series.  I also would like to read The Lord of the Rings, but I'm hesitant to make a commitment, as I have so many other books that I'm planning to read.

Wishing everyone happy reading days and lots of them in 2016!!