Ah ha!  Hamlet reveals to Horatio that on his way to England, he discovered one night upon opening the sealed directive to the English king, that Claudius had plotted his murder.  Covertly, he replaces his name on the letters with those of Rosencrantz and Guildenstern, and reseals them with his father's old seal.  It appears that Hamlet has no regrets, except perhaps in his treatment of Laertes, as he sees Laertes as a mirror image of himself.

A young courtier, Osric, enters and announces a request from Claudius for Hamlet to spar with Laertes using swords, but not before much circumlocution and apparently senseless bantering between Hamlet and the courtier.  Hamlet reveals to Horatio that he expects to emerge the winner, but still he has a unsettled feeling.

The King and Queen enter with Laertes and entourage. Hamlet makes an apology to Laertes, blaming his madness for his actions, whereupon Laertes proclaims that he will not accept the apology upon his honour until a higher council has advised him, but he will accept Hamlet's love.

Before they begin, Claudius announces that he will drink each time Hamlet scores a hit and will drop a precious pearl into the cup.  Hmmm, we can only imagine what the "pearl" will be.  They begin, yet Hamlet refuses to drink from the cup, claiming that he wants to finish the match.  Gertrude, however, drinks before anyone can stop her and the tragedy is underway.  After Hamlet scores two hits, Laertes decides to deal the fateful stroke but guilt nearly stays his hand.  However, Laertes scores a hit, then they scuffle, somehow the rapiers are exchanged and Hamlet wounds Laertes.  The queen collapses from the poisoned drink and likewise, immediately afterward, Laertes announces that he has been slain by his own treachery.  He tells Hamlet that he, too, has only an half hour to live, implicating Claudius in the murderous plot.  Hamlet then both skewers Claudius and forces him to drink the poison, thereby killing him with his own poisonous "union".  Laertes requests Hamlet's forgiveness as he dies.  Yet the drama is yet to abate.  Horatio, claiming he is more Roman than Dane, attempts to follow Hamlet to the grave, but his friend stays his hand.  He needs Horatio alive so his story can be told, otherwise who is to really know the truth of the plotting and machinations.  Horatio is to revel the implications of the "rottenness" in Denmark.  With his "dying voice", Hamlet passes the crown to Fortinbras who arrives to witness the carnage.  The English ambassador announces that Rosencrantz and Guilderstern are dead but wonders who will receive the news.  Horatio begins his promise to Hamlet:

"And let me speak to the' yet unknowing world
How these things came about.  So shall you hear
Of carnal, bloody, and unnatural acts,
Of accidental judgments, casual slaughters,
Of deaths put on by cunning and forced cause,
And, in this upshot, purposes mistook
Fall'n on th' inventors' heads.  All this can I
Truly deliver."

Fortinbras will call the nobles to audience to hear of these deeds and Horatio urges:

"But let the same be presently performed
Even while men's minds are wild, lest more mischance
On plots and errors happen."

The trust must be told before more unwitting tragedy unfolds.  Hamlet is born away like a soldier, with honour and respectful words from Fortinbras.


In the last scene it appeared that the returned Hamlet was a different Hamlet than had left Denmark, and this scene confirms it.  Hamlet begins to act, but act with reason and deliberation.

Osric's behaviour towards Hamlet is suspect.  He agrees with everything Hamlet says as if he's trying to placate him.  Hamlet must know that Claudius' machinations are behind his behaviour.  The Prince appears to know that the confrontation with Claudius is coming to a head. However, Osric also defies Hamlet in refusing to put on his hat when requested.  Really?  Defy the Prince of Denmark?  Is this an indication of Hamlet's loss of power?

Again, instead of being wholly fixated on revenge, Hamlet shows concern for others, regretting his behaviour toward Laertes and wishing for a reconciliation.

There are a number of questions this scene brings up which will perhaps remain unanswered.  Does Hamlet really believe that he is/was mad?  Does Gertrude drink the poison unknowingly or not?  Does Claudius make a true effort to stop her drinking?  Does Hamlet suspect about the poisoned drink?

Initially all three characters, Fortinbras, Hamlet and Laertes are united by the deaths of their fathers and a thirst for revenge; at the end of the play they are united by a goodwill towards each other, and perhaps a realization that revenge only brings catastrophe and tumult into lives, and in this case, a kingdom.  The latter point is amplified by Horatio at the end, where he appears to want to educate the influential masses, using Hamlet as an example. Revenge is like a poison and kills those who come in contact with it. 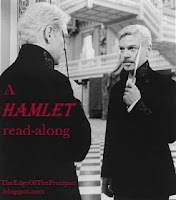