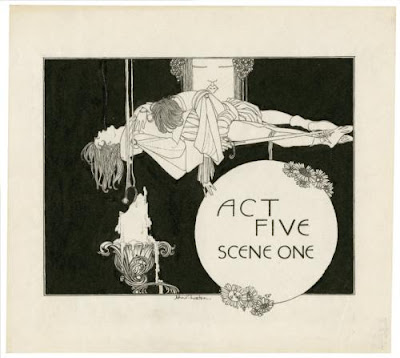 
And we begin with a little levity topped with introspection.  The scene changes, quite surprisingly, to a cemetery where two grave diggers are acting the parts of fools.  One is musing that permission was given to bury Ophelia in the graveyeard, only because she was nobility (normally, under Catholic law, suicides could not be buried on holy ground). They banter some more until Hamlet and Horatio arrive and Hamlet is disturbed by the disrespectful treatment that the bones of the dead are receiving as the gravedigger digs.  He muses about mortality and that death knows no class or boundaries, treating all in the same manner.  Death, in her universality, has no respect for rank or class, as a leader such as Ceasar or Alexander the Great can turn to dust and end up being used to plug barrels.

The King and Queen arrive on the scene, and both the reader and Hamlet learn that it is Ophelia's funeral procession.  Hamlet is shocked at first, yet bursts into the ceremony in his grief, almost defying anyone to question his love for her.  When he departs, Claudius reminds Laertes of their plans for Hamlet's demise.

With regard to Hamlet's contemplation on mortality, will the nothingness of death prompt him to revenge, in effect, spurring him to action in life?

The most poignant lines in the play come right before Hamlet jumps into Ophelia's grave in his grief:

Which brings us to the big question:  did Hamlet really love Ophelia, and can we can determine the answer from what we've gathered so far during the play?  I believe that his love was real --- there's no good reason to disbelieve his claim here.  Yet why did he treat her so dismally earlier on in the play?  I tend to think that Hamlet was so consumed with the task of revenging his father that the only benefit he saw in the people around him was how they could help him achieve that goal.  In his thirst for revenge, Hamlet lost his humanity and in this scene we see a little of its return.  We see it even before Ophelia's burial scene, in the sensitivity he shows towards the mishandling of the bones and skulls in the graveyard.  Yet this scene could also be a foreshadowing of his own death, and perhaps the sympathy we see from Hamlet is directed only towards himself.  Ah, Shakespeare, you tie us in mental knots once again!