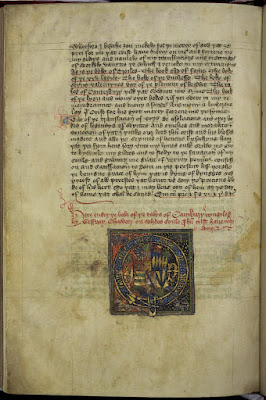 Chaucer concludes his tales by stating that if this sermon has pleased anyone, it is because of Christ, but if it has displeased them, he takes all the blame. He prays for forgiveness for his translation of a number of well-known books, including "tales of Canterbury", although only the tales that tend towards sin. He then bookends more spiritual books in his closing comments, perhaps hoping those more edifying books will wipe out any sins for his translation of any immoral ones.

There is speculation as to whether this Retraction was a death-bed retraction, a confession, written by someone else, a continuation of The Parson's Tale, or simply a method employed to ensure his safety from the church for these sometimes bawdy tales.  While it's entirely possible that Chaucer regretted writing such morally bankrupt stories, I think it more likely that Chaucer was simply giving himself an out.  Like Thomas More who is perhaps deliberately unclear with his intentions in Utopia to protect himself from the state, Chaucer gives himself an excuse for the church: yes, I did it but I'm very sorry and I'll spend the rest of my life repenting.  How can one argue with that?

And here finishes my first, but not my last read, of The Canterbury Tales. They honestly exceeded all of my expectations.  Chaucer is not only a master of poetry, he is a master of human nature and a master of the reader.  One of my favourite reads of 2015!