Seven Against Thebes by Aeschylus 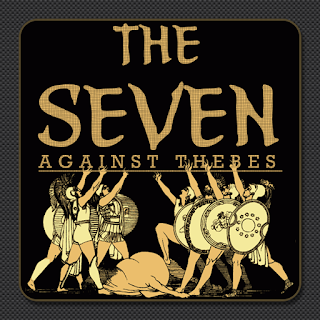 "You citizens of Cadmus, he must speak home
that in the ship's prow, watches the event
and guides the rudder, his eyes not drooped in sleep."

Produced in 467 B.C. and winning first prize in the City Dionysia drama competition, this play is assumed to be the last of a trilogy of plays which dealt with the Oedipus cycle, the other two being called Laius, and Oedipus, both lost, as was the concluding satyr play, The Sphinx.  Driven mostly by dialogue, this play requires some background history to add some further insight.

Oedipus, king of Thebes, received exile for unwittingly killing his father and marrying his mother.  In return, he placed a curse on his sons, Eteocles and Polynices, that they should divide the nation, each ruling in alternate years. However, after the first year of rule, Eteocles, enjoying his prominence, refuses to relinquish the throne to his brother, causing Polynices to raise a foreign force of Argives, led by the famous "seven", to regain his inheritance.  It is at this point that the play begins.

Unlike Aeschylus' earlier plays, The Persians and The Suppliant Maidens, which begin with a lyrical introduction, Eteocles begins this play with a dramatic patriotic rhetorical speech, appealing to the men of the city to take up arms and defend their honour against the Argives.  A messenger arrives announcing that the Argive army is ready to attack and the Theban army prepares to meet them.  Yet a litany of Theban women's voices rise above the spectacle, invoking the gods for protection and lamenting the possible repercussions of the battle.  Eteocles loses his patience. These women are unnerving the populous with their pleas to gods and images of doom.  Heaven deliver him from women's excesses!  And so begins an exchange between them, with Eteocles counselling practicality and proper, balanced emphasis on divine guidance, and the women accentuating the importance of invoking the gods favour. Eteocles demands silence, but the women continue to speak, quite astutely, with regard to the situation, until finally they obey his command.

The messenger enters, and so commences a trialogue between him, Eteocles and the Theban women, the former announcing the Argive heroes, and Eteocles proclaiming the Theban defenders, while the women laud their warriors and invoke divine favour.  Of course, the Argive warriors are the "Seven" against Thebes and each of these attackers has an emblem on his shield.  Curiously, the Argive attacker at the sixth gate, Amphiaraus, is counselling temperance to his leader, proclaiming murder if they continue.  He expects to die a prophet in the land.


From Eteocles, there is an impious and sacrilegious glory in war, and an obvious antipathy towards the gods, instead proclaiming a complete reliance on men and their ability.  Eteocles does not discount the gods, but does not place an importance on them.  With a curse upon his family, the gods have turned their back on him, and thus, he does likewise.  Now brother will fight against brother, the curse culminating through human choice, although they make it appear as though they have been stripped of their free will by the curse.  The chorus of Theban women have not ceased their beseeching:

"O dearest son of Oedipus, do not
be like in temper to this utterer
of dreadful sayings.  There are enough Cadmaeans
to grapple with the Argives:  such blood is expiable.
But for the blood of brothers mutually shed
there is no growing old of the pollution."

In the psychology of Eteocles, he cannot escape his fate, in spite of the women pleading for him to use his free will to choose, horrified at his willingness to shed familial blood.  As Eteocles goes to face his destiny, the chorus of women seem to reevaluate its outlook, focusing on the curse as a lament of fate.  When the messenger returns with news of the battle, his proclamation can be of no surprise.  Brother has, in fact, slain brother, and the curse is brought to fruition.  Even though the city is saved, there is no celebration.  Instead, the bodies are carried in, followed by Antigone and Ismene, their sisters, their lamentations of shivering intensity.  The tragedy is a "double sorrow".

Finally, a Herald arrives to announce an honourable burial for Eteocles, since he fought for his city, upholding his ancestors, but in contrast, Polyneices will be cast out to the dogs for bringing a foreign force to attack his city, casting dishonour on his head.  With great resolve, Antigone proclaims that in spite of the edict, she will give her brother a proper burial.  They banter back and forth, the Herald laying her further actions as her own responsibility.  In the end, the chorus divides, half to bury Polyneices, and the other half going the way of Justice.

Originally, The Seven Against Thebes ended with a melancholy mourning for the two brothers, but with the popularity of Sophocles' Antigone, the ending was re-written fifty years after his death to make a smooth transition between the two plays. While the Seven Against Thebes is not considered as refined or as seamless as Aeschylus' masterpiece, The Orestia, nevertheless, it contains many wonderful components to its structure.

The battle for the city of Thebes is also presented in Eurpides' The Phoenician Women.