"Whether I shall turn out to be the hero of my own life, or whether that station will be held by anybody else, these pages must show."

Dickens was an author who had not appealed to me in my teens so, in an effort to expand my horizons, I began to follow a book group that was reading through his works chronologically.  Since joining them, I have been able to read Martin Chuzzlewit, Dombey and Son, and my most recent read, David Copperfield. 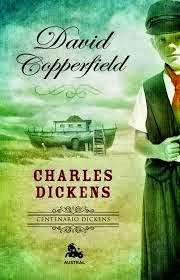 Fatherless, David Copperfield lives with his mother and their spunky and loveable servant, Peggotty, in quiet and amiable bliss.  When his mother decides to remarry to an irascible man named Murdstone, David's life begins an upheaval that catapults him through a variety of circumstances, both beneficial and tragic, each of his decisions mirroring his persistence, bravery, suffering and loyalty, working together to build a quiet character of strength and reliability. 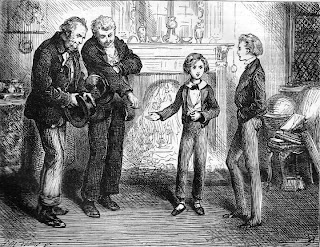 The story is so vast it is impossible to write a summary that would do it justice so let's examine some of the wonderful characters that Dickens threads throughout the narrative:

Betsy Trotwood, David's aunt, appears to abandon him and his mother at the beginning of the story, yet when David needs her, she becomes a stabilizing force in his life and an excellent example with her dry wit and generous heart.


Peggotty, his nurse, sees David as her own and often assists him in his endeavours; a cherished substitute mother.


Mr. Peggotty, her brother, shows unwavering devotion and heart-wrenching unconditional love to his niece, Emily, after her flight with David's nefarious schoolfriend, Steerforth, and her obvious ruin.


Mr. Micawber, a shady, bumbling fellow, appears like an odiferous fragrance throughout David's life, and while good intentioned, only causes trouble whenever he appears; however he ends up helping to bring about a positive resolution to a quite dire circumstance at the end of the book.


Even Dickens' other female characters were likeable.  In many of his novels he recurrently treats the feminine nature as sacchrine, helpless and perfect.  It can get very annoying.  Yet while Dora is all of these things, somehow Dickens makes her real; this time the characterization is for a purpose and works well within the story.  I loved Dora, as well.


Dickens appears to emphasis the idea of constancy and the value of tradition.  Copperfield's childhood home is revisited at a few points in the novel, and his aunt Trotwood, while losing her home when her money is treacherously stolen, regains it again at the conclusion of the story.  Loyalty to his friends is paramount for David, and he ensures he maintains lasting relationships with most of them throughout his lifetime.  He sees good in everyone, from his child-wife who is clinging and rather dim, to his admired school chum who, while he plummets in David's esteem after seducing Emily, is still regarded with compassion by David.  There is a lasting emphasis on family, familiar houses from his past and the desire to remain close to the people, place and things that have made him who he is.

David's Aunt Trotwood wisely states: "We must meet reverses boldly, and not suffer them to frighten us, my dear.  We must learn to act the play out.  We must live misfortune down, Trot!" and throughout the book her words are played out in David's actions as he perseveres through misfortune, scandal and tragedy to become a devoted husband, a friend of whom anyone would be proud, and a successful writer in his own right.

Claimed to be autobiographical in nature, the novel was clearly dear to Dickens, his words reflecting his affection for it:  " …. like many fond parents, I have in my heart of hearts a favourite child.  And his name is David Copperfield."  A truly wonderful read!