The Lion, The Witch and The Wardrobe by C.S. Lewis 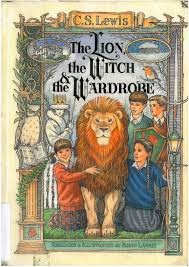 "Once there were four children whose names were Peter, Susan, Edmund and Lucy."

There is a wardrobe in an old room.  Picture yourself opening the wardrobe door.  You climb inside it, careful to leave the door cracked open slightly as you push your way back in amongst the antique coats, which smell of dampness and age and silent history.  But wait!  It is cold underneath you and, as you reach down, you grasp a wet, slushy substance that could only be snow!

What a wonderful way to begin The C.S. Lewis Project and the Classic Children's Literature Event!  The Lion, The Witch and the Wardrobe is an enduring children's classic that is magic, just pure magic!  Peter, Susan, Edmond & Lucy discover an old wardrobe and find that it can transport them to another world called Narnia, where the White Witch has cast a spell on the land and "everything is winter and never Christmas."  However, all is not bleak and hopeless because Aslan the Lion is on the move.  He begins to bring spring to Narnia, but Edmund betrays his siblings with the result that Aslan willingly pays for Edmund's transgression with his life.  With his resurrection, and after an enormous battle led by Peter and Edmund, Aslan is acknowledged King of Narnia.

Lewis rejected the assertion that this story was intended as an allegory and, being an expert in that area, Lewis was certainly qualified to judge:

If Aslan represented the immaterial Deity in the same way in which Giant Despair represents Despair, he would be an allegorical figure.  In reality however he is an invention giving an imaginary answer to the question, "What might Christ become like if there really were a world like Narnia and He chose to be incarnate and die and rise again in that world as He actually has done in ours?"  This is not allegory at all ……. This …… works out a supposition."

While this book contains references to Christianity, Lewis did not initially set out to write a Christian story:


"Some people seem to think that I began by asking myself how I could say something about Christianity to children; then fixed on the fairy tale as an instrument, then collected information about child psychology and decided to what age group I'd write for; then drew up a list of basic Christian truths and hammered out 'allegories' to embody them.  This is all pure moonshine.  I couldn't write in that way.  It all began with images: a faun with an umbrella, parcels, a lamppost, a snow-covered kingdom.  At first there wasn't even anything Christian about them.  That element pushed itself in of its own accord."

Within the story, Lewis communicates aspects of Christian faith in way that is easy to understand and, through the death of Aslan, Lewis allows us to experience the agony and horror of Christ's death and to experience the conflicting emotions of his friends and disciples, as well as their joy upon his resurrection.  His style is a simple straight-forward narrative that easily communicates emotions of joy, perseverance, loyalty, pride, envy, betrayal, and sadness.  A timeless story with timeless themes that can be read again and again. 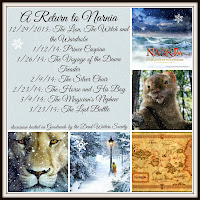