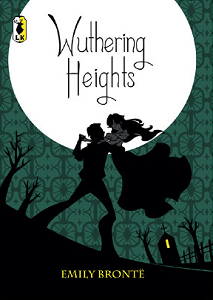 
The tension builds, a number of occurrences adding to the heightened drama.  Heathcliff returns after three years, apparently richer although he will not reveal how his fortunes changed.  On the outside he appears more worldly and dapper, as though he can now stand among equals, yet we can glean from certain clues that his character may even be darker and more perverted than before.

Catherine has a break-down due to a conflict between her husband, Edgar and Heathcliff.  I had a hard time reconciling her stubborn willfullness to her fragile state of health and I really wasn't sure what precipitated her collapse.  At one time she screams at both men that neither would listen to her and that nobody exhibited the proper concern for her, so perhaps it was simply spleen that she was not getting her own way.  In any case, her condition grows serious and the outcome is her death.  At times she appears to want it, to relish the thought, because of the effect it will have on other people.

Heathcliff himself is an enigma.  I had expected him to take a darker road, but thought that his descent would still be held in tension with his love and/or devotion to Catherine, however his behaviour belies an almost severing of his soul from humanity.  His seduction of Edgar's sister, Isabella, is despicable, his intent only to torture and humiliate her, an act of deliberate vengeance upon Edgar.  His wild carousing with Hindley and dark prowling about, only serve to underline the depravity of his character.  His concern for Catherine's health is evident, but he does not or refuses to exhibit any conception of how his actions influence her for good or ill.  I was actually quite perplexed by Brontë's sketching of his character.

Where is this book going?  We have finished slightly more than half of it and Catherine is dead, so I have to question whether the main theme of the novel is enduring love, which you often hear people speak of when referring to Wuthering Heights.  To be honest, I'm finding Heathcliff quite repellent; I cannot find one glimpse of a redeeming feature or even something to draw from him that is a teachable moment.  Hmmm ……

Well, I shall keep reading …….