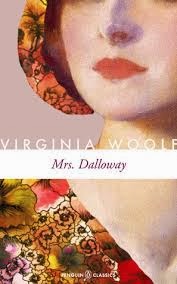 "Mrs. Dalloway said she would buy the flowers herself."

After reading Woolf's To The Lighthouse I was excited to dive into Mrs. Dalloway.  Following the lead of James Joyce's Ulysses, Woolf used the same writing style, and, in a loose imitation of Joyce, chronicles a day in the life of a prestigious middle-aged woman in London. Woolf critiqued Joyce's Ulysses, calling it "illiterate" and "under-bred," finding the graphic sexual fantasies and the foul language base, and saying it reeked of a "queasy under-graduate scratching his pimples."  Was Mrs. Dalloway Woolf's attempt to get this style of writing right?

Using her signature "stream-of-consciousness" style, Woolf chronicles one day in the life of Mrs. Richard Dalloway, the wife of a respectable, wealthy gentleman.  Set in post-World War I London, on this particular day she is preparing for a party she will host that evening, an unusual party whose guests will span the ages of her life, past and present.  As she performs her tasks, her mind wanders back through days gone by, unearthing ghosts of earlier loves, regrets, irritations, ever-present worries and satisfaction.  The reader is also privy to the thoughts of many of her friends who will be present at this party, as they perform their daily business.

As a secondary plot, we meet Septimus Warren Smith, a surviving soldier of the war, yet a hollow shell of a man, his mind barely touching reality.  In spite of the persistent yet useless intervention of his wife and doctors, he gradually is sucked into a whirlpool of despair, seemingly of his own making, and suffers a very poignant and pathetic fate.  Or does he?

I'm going to go out on a limb here and offer a very unusual interpretation of at least one theme in the novel.  Woolf's treatment of Septimus, in contrast with Mrs. Dalloway and her social peers, was very intriguing.  If we examine the thoughts of Mrs. Dalloway and her friends and acquaintances, they touch upon parties, flower-shows, scholarships, the family business, Bartlett pears, gossip and cricket.  In comparison, Septimus' musings revolve around human nature, the truth, Evans (his friend who was killed in the war), aloneness, meaning, and the beauty of words.  Septimus is presented on the surface as a character who is emotionally unbalanced, while Mrs. Dalloway's circle is the respected rational group.  Has Woolf turned appearance on its head?  Is the perceived deranged person really the one who is sane, and are the ones who appear "normal" actually the group who is not?  It's an irony that's inescapable.

For Septimus, the only liberation from a world turned upside-down was death.  Is his escape from a materialistic world concerned with trivialities an heroic act?  Woolf makes it appear so:

"…… Death was defiance.  Death was an attempt to communicate, people feeling the impossibility of reaching the centre which, mystically, evaded them; closeness drew apart; rapture faded; one was alone.  There was an embrace in death."


Ironically, sixteen years after the writing of Mrs. Dalloway, Woolf followed Septimus into the murky fog of depression and, placing stones in the pockets of her overcoat, walked into the River Ouse near her home, drowning herself, a sad fate for one of the most respected female literary writers of the time.

I just loved Woolf's To The Lighthouse and I really wanted to like Mrs. Dalloway.  There are certain aspects I do like about it, such as the character of Septimus Warren Smith, the relentless passage of time, the allusions to various literary works of different eras, the exploration of the lingering impact of the first World War and the diminishing influence of the British empire.   The prose is lovely, light and lyrical, each sentence a candy you can pop into your mouth and taste a burst of spring.  Yet I found the story meandering and disjointed.  In To The Lighthouse, the stream-of consciousness  flowed towards one main character, Mrs. Ramsey, wrapping her in a warm glow, even while each character retained their own lively identity.  In Mrs. Dalloway, the streams flow out from Mrs. Dalloway and a host of other characters, at times to alight on each other, but many times to float out into the atmosphere, leaving the reader confused or adrift.  The lack of cohesiveness was like an irritating burr in my britches and no matter how much I tried, it was hard to ignore.  Yet, in spite of the persistent irritation, I will probably re-read this book sometime in the future.  Woolf's books are like a deceptively packed suitcase where you're never quite certain if you have even removed half of what is contained.