The Winter's Tale by William Shakespeare 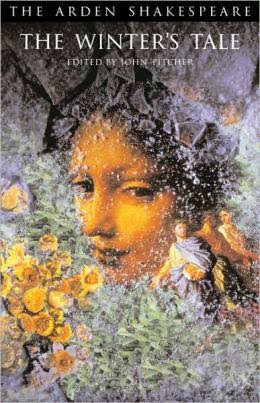 "What's gone and what's past help, should be past grief."

Leontes, King of Sicilia and Polixenes, King of Bohemia, grew up together in a type of idyllic paradise, becoming as close as brothers.  At the opening of the play, Polixenes has been visiting Leontes and his queen, Hermoine, and is ready to return home after his nine-month stay.  Leontes begs his friend to remain longer, yet when he refuses, the king employs the queen's pleading to try to change his mind.  And change his mind, Polixenes, does, unwittingly sparking a torrential storm of jealously within Leontes, as he, with Gollum-like psychosis, convinces himself that Hermoine has been unfaithful to him with his friend, and that the child she is about to give birth to does, in fact, belong to Polixenes.    Attempting to gain the sympathy of a Sicilian nobleman, Camillus, Leontes reveals his plot to poison the Bohemia king, but Camillus' sensible and gentle nature will not allow him to commit such an atrocity and instead, he warns Polixenes and they both escape to the kingdom of Bohemia. Yet their escape leaves Hermoine at the mercy of her husband's wrath and, against all the protests of his noblemen and, in particular, the wife of Antigonus, Paulina, Leontes tries Hermoine with the intent to condemn her to death.  While imprisoned she bears the child, a girl, who Leontes entrusts to Antigonus to abandon it in the wild, whereupon Antigonus leaves the child in the kingdom of Bohemia.  But tragedy strikes when part way through the hearing, Leontes learns of the death of his only son, Maxmillus.  Hermoine faints, then dies and Leontes suddenly realizes his foolish behaviour and repents.


The child of Hermoine, Perdita, grows up in Bohemia as the daughter of a shepherd and we meet her again when she is sixteen and the love of Florizel, the son of Polixenes.  Through a quarrel with his father, Florizel and Perdita seek sanctuary in Sicilia, where Leontes has been spending the last 16 years doing penance for his harsh actions.  Paulina, in control of the situation as ever, makes Leontes promise not to marry unless a women in the likeness of Hermoine is approved by her, and he consents.  She then takes him to see a statue of his dead wife but lo!  This statue moves and Hermoine is alive again! There is much rejoicing and more when the identity of Perdita is discovered.  Winter has melted away from Sicilia and spring has come once again!


I really felt that this was certainly a weaker play of Shakespeare's.  The audience was asked to immediately accept Leontes intemperate jealousy without any back-story or obvious proof of unwise behaviour on either the part of Hermoine or Polixenes.  What would cause a person who has always trusted and had the best relation with this friend, to suddenly question his character and honesty?  No other character believed in Hermoine's guilt, yet Leontes persists in his delusion.

I also was taken aback by some of the staging of the play.  One senses that much of the important action takes place off stage:  the reason or backstory for Leontes' jealousy; a reason for his immediate contrition; and shockingly, the climax with the reunion and reconciliations is not shown to us but told to us through a third party medium.  I'm still trying to grasp Shakespeare's purpose in this structure.  The lack of all these critical ingredients cries lack of development and therefore, a lack of impact.  It's not sensible, it's not plausible and it's certainly far from Shakespeare's usually masterly grasp of his material and his audience.  I remain, puzzled.

I read this play for my Shakespeare: From the Page to the Stage course.