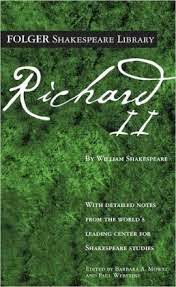 " For God's sake, let us sit upon the ground
And tell sad stories of the death of kings ...."

Why do they call this play a "history"?  It was an absolutely tragedy .... gut-wrenchingly tragic, and I still feel depressed about the outcome.  Dare I say this is my favourite Shakespearean play so far?  Isn't that weird?  An historical play about a king of whom I knew little about ........  Yet Shakespeare's verse is astonishingly beautiful.  The words flow around you like a bubbling river, conveying the anguish, terror, loss, loyalty, courage, deception, abandonment and hopelessness.  Not only is the play alive, but the story is alive and the words have a life of their own.

The play begins with a dispute between Henry Bullingbrook (Bolingbroke), cousin to King Richard, and Thomas Mowbray, Bullingbrook accusing Mowbray of misappropriating money and claiming that he was part of the murder of the Duke of Gloucester (which was probably orchestrated by Richard), yet before either can accomplish a duel, King Richard decides to banish both, Bullingbrook for 6 years and Mowbray for the term of his life.  John of Gaunt, is broken hearted at the exile of his son, Bullingbrook, and soon becomes sick with grief.  Upon Gaunt's death, Richard decides to expropriate his estates and money, thereby defrauding Bullingbrook of his inheritance.  As Richard leaves to deal with the wars in Ireland, Bullingbrook gathers supporters and lands in England for the purpose, it appears, of regaining what is rightfully his.  Because Richard has taxed his subjects without remiss, and has fined the nobility for errors of their ancestors, most of the nobles rise up against him.

When Richard returns to England he is left with a small contingent of supporters including his cousin Aumerle, the Duke of York's son, and lords Salisbury and Berkeley and other retainers.  Upon meeting with Bullingbrook, Richard relinquishes the throne to him, and Bullingbrook wastes no time in appointing himself King Henry IV.  Immediately, Richard is placed in prison.  When an uprising by Aumerle is discovered by his father and vehemently exposed, Aumerle is graciously pardoned by Henry IV, yet with dire threats towards the other conspirators.  In prison, Richard attacks his warden in frustration and is killed by Exton; when Henry hears about the murder, he is distressed and the play ends with his sad lament.

When I finished this play, I was so anguished by Richard's sad end and how he'd been treated, yet reading some pre-history would have perhaps measured my emotions, as the good king was not entirely as innocent as he is made out.  Richard inherited the title of king when he was 10 years old and spent many years of his reign under the control of counsellors and advisors.  It wasn't until later on, that he appeared to throw off their power and come into his own.  However, the fact that he taxed the populous to such extreme extents to finance his wars and royal coffers, contributed to the fact that he was not well loved or respected.  He was a king who ruled by impulse and without a justness that would have connected him to the people.  In fact, in the play, when he is walked through the streets, people dump garbage on his head, not a very fitting display for a monarch who truly believed that he was anointed by God.

Another consideration is that Shakespeare is writing drama.  He is known for taking the framework of history and then chopping and changing and perhaps, speculating for dramatic and political effect.   It is interesting that at the end of the play, Richard is seen as a pitiful figure who has voluntarily given up his kingship, and Bullingbrook condemns his murder, leaving the new king innocent of the crime and helpless to stop its culmination.  A very safe and uncontroversial tact on both sides for our playwright!


My favourite speech of Richard's pulses with foresight, nostalgia and lament:

"For God's sake let us sit upon the ground
And tell sad stories of the death of kings:
How some have been deposed, some slain in war,
Some haunted by the ghosts they have deposed,
Some poisoned by their wives, some sleeping killed.
All murdered.  For within the hollow crown
That rounds the mortal temples of a king
Keeps Death his court and there the antic sits,
Scoffing his state and grinning at his pomp,
Allowing him a breath, a little scene,
To monarchize, be feared and kill with looks,
Infusing him with self and vain conceit,
As if this flesh which walls about our life,
Were brass impregnible.  And humoured thus,
Comes at the last and with a little pin
Bores through his castle walls, and farewell king!"

As Richard begins to realize the possible outcome of the circumstances and tries to reconcile them with his belief that a king is sanctioned by God, we see his syntax begin to break down, with his pronouns of "we", being reduced to "I".  It is truly pitiful.


On a political note, this play was used to stir up populous support for Robert, earl of Essex, Queen Elizabeth I's one-time favourite, during his rebellion against her.  On the eve of the uprising, his supporters paid for the play, Richard II, to be performed at the Globe Theatre, but Essex's attempt to raise a coup against her failed. Retaliation was swift, however.  On February 25, 1601, Essex faced his execution and was beheaded on the Tower Green.  His was the last beheading at the Tower of London.

This was another wonderful experience with one of Shakespeare's historical plays.  I had expected to like them least in the canon, but they are certainly quickly becoming by far my favourites!