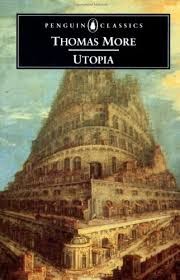 "The moste vyctoryous and tryumphante Kynge of Englande, Henry theight of that name, in all royal vertues Prince moste peerlesse, hadde of late in contrauersie with the right hyghe and myghtie king of Castell weightye matters, and of greate importaunce; for the debatement and final determination wherof the kinges Maieste sent me Ambassadour into flaunders, ioined in commission, and whom the kinges maiestie of late, to the greate reioysyng of all men, did preferre to the office of maister of the Rolles."

I certainly promise not to write this review in Middle English but I thought I'd give you a taste of it.  And, no, I didn't read the complete book in ME, I was able to get through about 1/5 of it and then changed to a modern English version.  And most happily, I might add.  The original Utopia was written in Latin in a fine emulation of Ciceronian Latin, yet More took it a step further in humour and playfulness.

Born in London in 1478, Thomas More was a very learned man and, if he had been able to follow his inclinations, would have been destined for the church.  His father, however, had other aspirations for him and, being a dutiful son, he conceded to his wishes and chose the law as his profession.  Unexpectedly, he was a marvellous success as a lawyer.  He soon had a thriving business and his extraordinary aptitude quickly brought him under scrutiny of the "higher-ups". The political positions he was eventually offered were always accepted reluctantly, and More had a life-long dilemma with reconciling his loyalty to his sovereign and his loyalty as a Christian to his conscience.

As a Catholic, More opposed the Protestant Reformation.  Serving as Lord Chancellor under King Henry VIII, he was accused of inflicting harsh treatment on heretics, but he denied the accusations.  What is interesting is that his son-in-law at the time, was enticed by "Lutheran heresies", and More's reaction when speaking with his daughter, was surprisingly temperate: "Meg, I have borne a long time with thy husband.  I have reasoned and argued a long time with him and still given him my poor fatherly counsel; but I perceive none of all this can call him home again.  And, therefore, Meg, I will no longer dispute with him, not yet will I give him over; but I will go another way to work, and get me to God and pray for him."

A man of honour and high standards, he would not even compromise for his family.  When one of his sons-in-law expected preferential treatment  because of More's office, More stated, "If my father whom I dearly love were on one side and the devil, whom I sincerely hate, were on the other, the devil should have his rights."

With King Henry VIII's decision to divorce his queen, Catherine, More's power began to unravel.  While remaining quiet publicly, he continued to support the Pope over the King, and when he was required to sign a letter asking the Pope to annul the marriage, More refused.  Henry soon began to isolate him. Eventually when More openly refused to acknowledge the annulment, Henry took action, arresting More for treason.  He was decapitated on July 6, 1535. When the Holy Roman Emperor, Charles V, heard of his death, he said, "Well, this we will say, if we had been the master of such a servant, we would rather have lost the best city of our dominions than have lost such a counsellor."


Probably inspired by his close friend, Desiderius Erasmus, Thomas More wrote Utopia in 1516 during an embassy to the Netherlands.  A very brief book, yet with a complex structure, More used himself and a character called Raphael Hythloday to present political philosophies that range from the insightful and wise, to the curiously peculiar.  In Book I, More crafts the setting for Utopia and then, through his character and Hythloday's, offers a discourse on the evils and ills prevalent in European society.  While having a parallel set-up to Plato's Republic (Morton = Cephalus; Hythlodaye = Socrates; lawyer = Thrasymachus), More adopts occurrences from his own day to structure the framework of Utopia and construct a more politically and socially organized text.   More uses this venue to chastize the actions of kings who use the country's money for unproductive warmongering, and especially vilifies the practice of hanging thieves on the gallows, often for very petty infractions.  In Book II, More offers a detailed description of Utopia, its inhabitants and its societal structure. The Utopian community supports common property, slavery and religious tolerance.  Agriculture is the most treasured occupation but each Utopian is required to learn some other trade as well.  Finery is frowned upon, pre-marital sex and adultery punishable, and while atheists are allowed in Utopia, they are shunned because their views are counter-productive to the Utopian community.

Scholars are still in disagreement as to More's purpose when writing this book. On one hand, some purport that More's intent was to write and endorse a treatise on communism and its implementation.   Others scholars differ in opinion; while the book had a basis in the condition of European politics, it was nevertheless written tongue-in-cheek.  Brewer in his Reign of Henry VIII, appears to support this view:

"Though the Utopia was not to be literally followed ---- was no more than an abstraction at which no one would have laughed more heartily than More himself, if interpreted too strictly.  Utopia might serve to show a corrupt Christendom what good could be effected by the natural instincts of men, when following the dictates of natural prudence and justice.  If kings could never be elective in Europe, Utopia might show the advantage to a nation where kings were responsible to some other will than their own.  If property could never be common, Utopia might teach men how great was the benefit to society, when the state regarded itself as created for the wellbeing of all, and not of a class of a favoured few ......."


C.S. Lewis, a medieval and renaissance scholar, takes More's book as a light holiday work, and this summation rings true, as More make some comments himself that were obscure, but appeared to poke fun at his work.  Lewis states:

"..... it appears confused only so long as we are trying to get out of it what it never intended to give.  It becomes intelligible and delightful as soon as we take it for what it is ---- a holiday work, a spontaneous overflow of intellectual high spirits, a revel of debate, paradox, comedy and (above all) of invention, which starts many hare and kills none .....  There is a thread of serious thought funning through it, an abundance of daring suggestions, several back-handed blows at European institutions .......  But he does not keep our noses to the grindstone.  He says many things for the fun of them, surrendering himself to the sheer pleasure of imagined geography, imagined language, and imagined institutions.  That is what readers whose interests are rigidly political do not understand: but everyone who has ever made an imaginary map responds at once."

If we take into account some of the regional names in this work, the purpose may become clearer still.  "Utopia" literally means, "no place"; "Achoria" means "Nolandia"; "Polyleritae" means "Muchnonsense"; "Macarenses" means "Happiland"; and the river "Anydrus" means "Nowater".  Even Raphael's last name, Hythlodaeus, translates as "dispenser of nonense".  Was More being ironic or serious?  I doubt we can ever know for sure.

In spite of the obscurity of the book and some of the controversies surrounding More, I loved both the author and this work.  He appeared to treat both his wives well, quite clearly loved his children, was well thought of and respected, and in spite of his position, chose to write a story that not only amused his readers, but allowed them to explore human nature and come to their own conclusions with regard to universal issues.  Thomas More is a man to be admired and Utopia is certainly a book to be read!